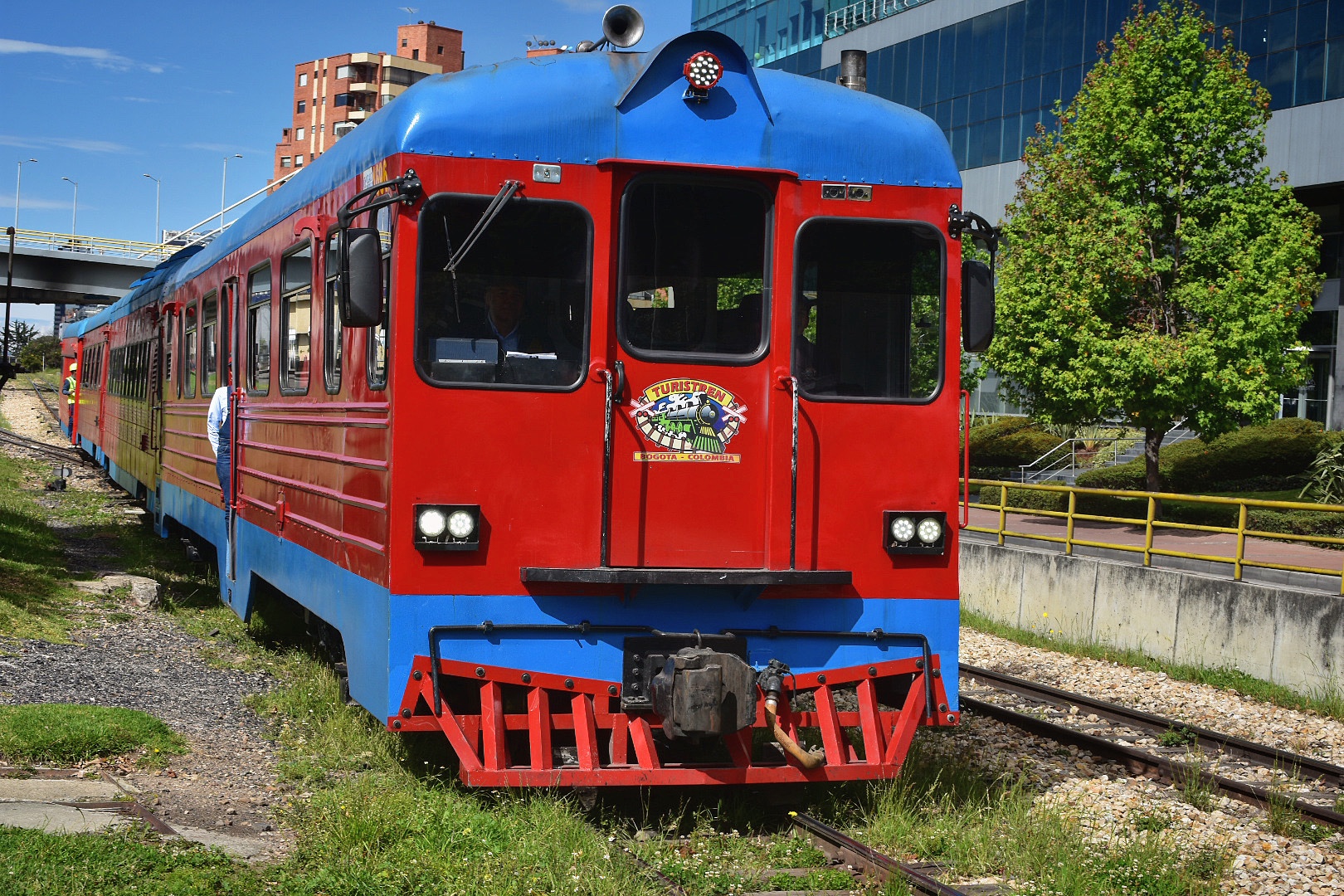 I decided I wanted to take the train in Bogota as soon as I realised it existed. Living close to Carrera 9 we hear the trains pass our several times a day and also don’t need to invest in an alarm as there is an especially excited driver who loves to press the horn at around 6am in the morning.

I don’t normally talk about my life outside of hiking on the blog but Angela and I have a 5 year old, Lorenzo, who is as excited about the trains as I am and with Angela showing little to no interest in the trip I decided to make it a boys day out and invited Jorge, Angela’s father. You can buy tickets direct from the Tren Touristico de la Sabana website or in person at the stations in Usaquen or Sabana. Being close to Usaquen, I decided to pop down and buy the tickets saving paying the administration fee. The tickets themselves are not cheap and I’ll detail all the information at the end.

The day finally arrived and for the first time on a trip out we had blue skys! Lorenzo was particularly excited and happily posed. The train was scheduled to leave at 9am on the Sunday and we were early to see the train arrive.

The train stops in the station for 10 minutes so there was time to get some obligatory photos before we boarded. 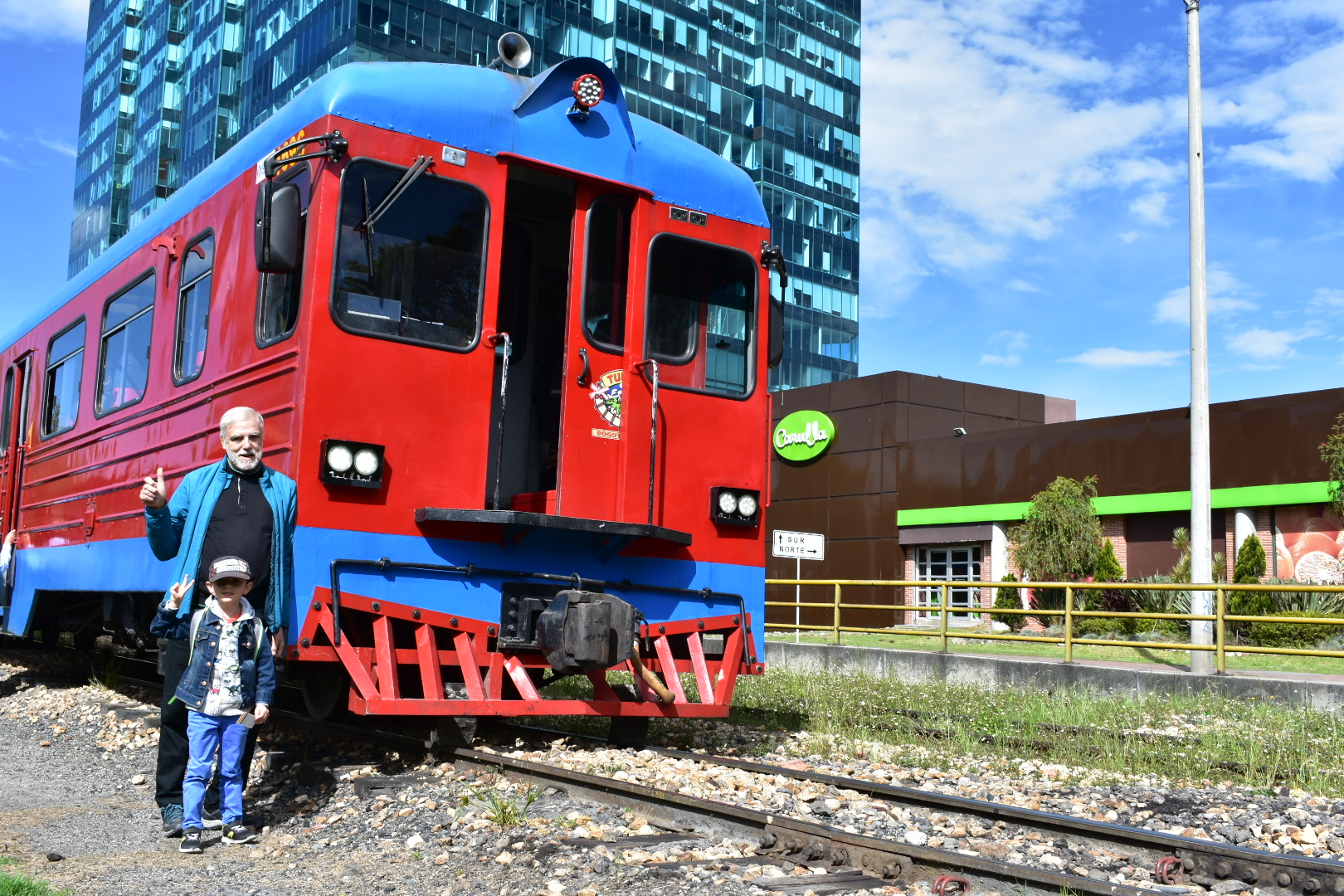 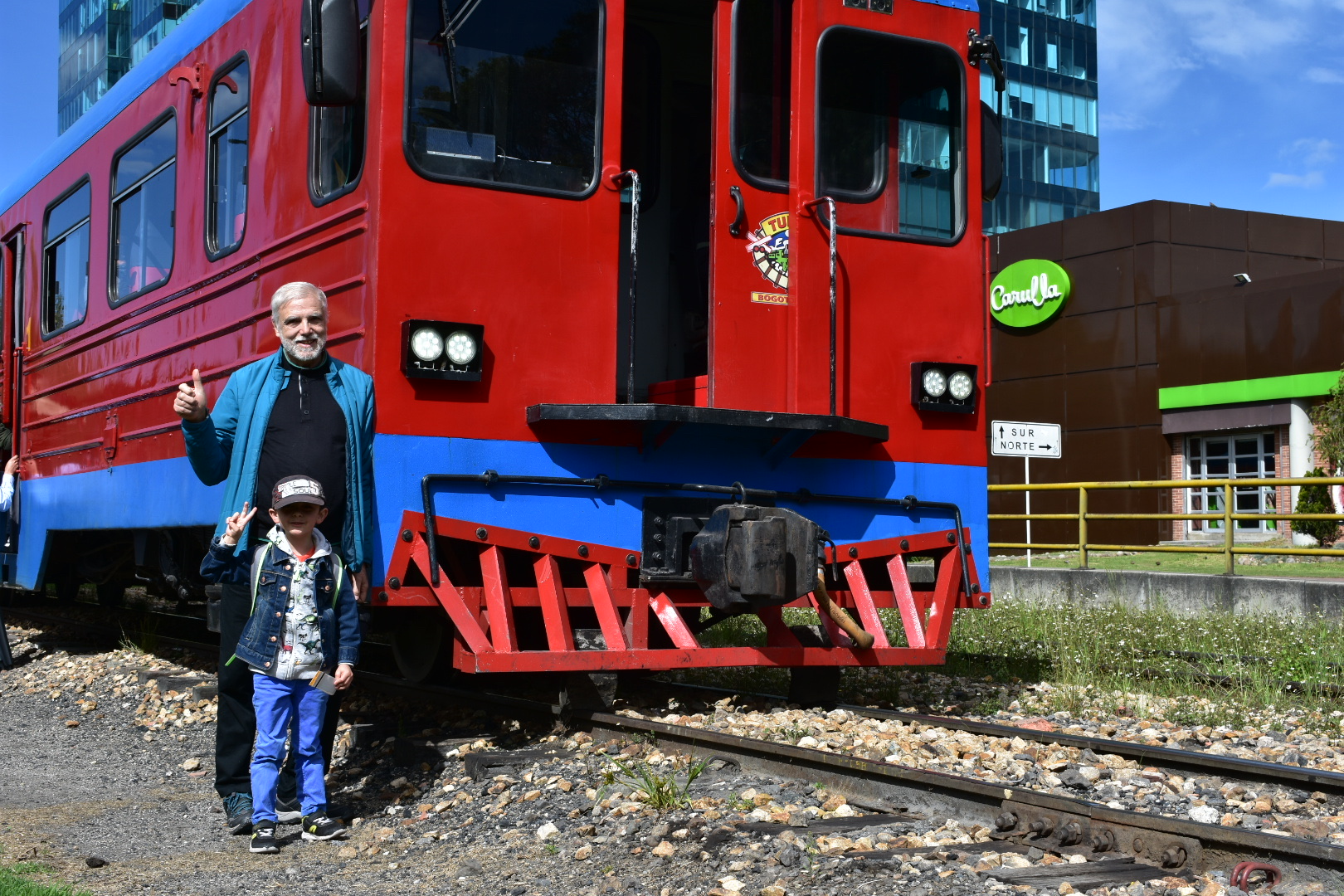 We were on the front carriage and ended up sitting right behind the driver, which was great in this case as unlike any other train I’ve ever been on there was glass between the passengers and the driver cabin meaning that we could see out of the front of the train.

And soon we were off. As this was a Sunday one side of Carrera 9 is a cycle path until 2pm so that’s why there are all the bikes on the street. I’ve never seen Bogota from this perspective and soon realised that although the train is slower than cars it doesn’t have to stop at traffic lights. Instead there is an army of people stopping traffic in various forms and the constant beeping of the trains horn warns the people, who do not always heed it with purpose, to get out of the way. Thankfully on this journey at least no one came close to being hit.

Throughout the journey there are people selling drinks and snacks, including beers. I didn’t feel 9 am was the right time to grab a beer. Also there was the opportunity to by tickets to the mines on the train, I think you can even buy them from the ticket office. Jorge was buying the tickets and it was only possible to pay by cash on the train, which we later realised was a mistake – if you can make sure you buy the tickets for the Salt Mines on the train or before you depart.

The train follows Carrera 9 to the end and then past buildings in the suburbs. There are lots of houses built really close to the track in this area, it is a poorer neighbourhood and you can see how people live. This is juxtaposed alongside a lot of high-rises of the rapidly expanding city.

Soon you are out of Bogota and surrounded by the green fields of the Savannah and the mountains. 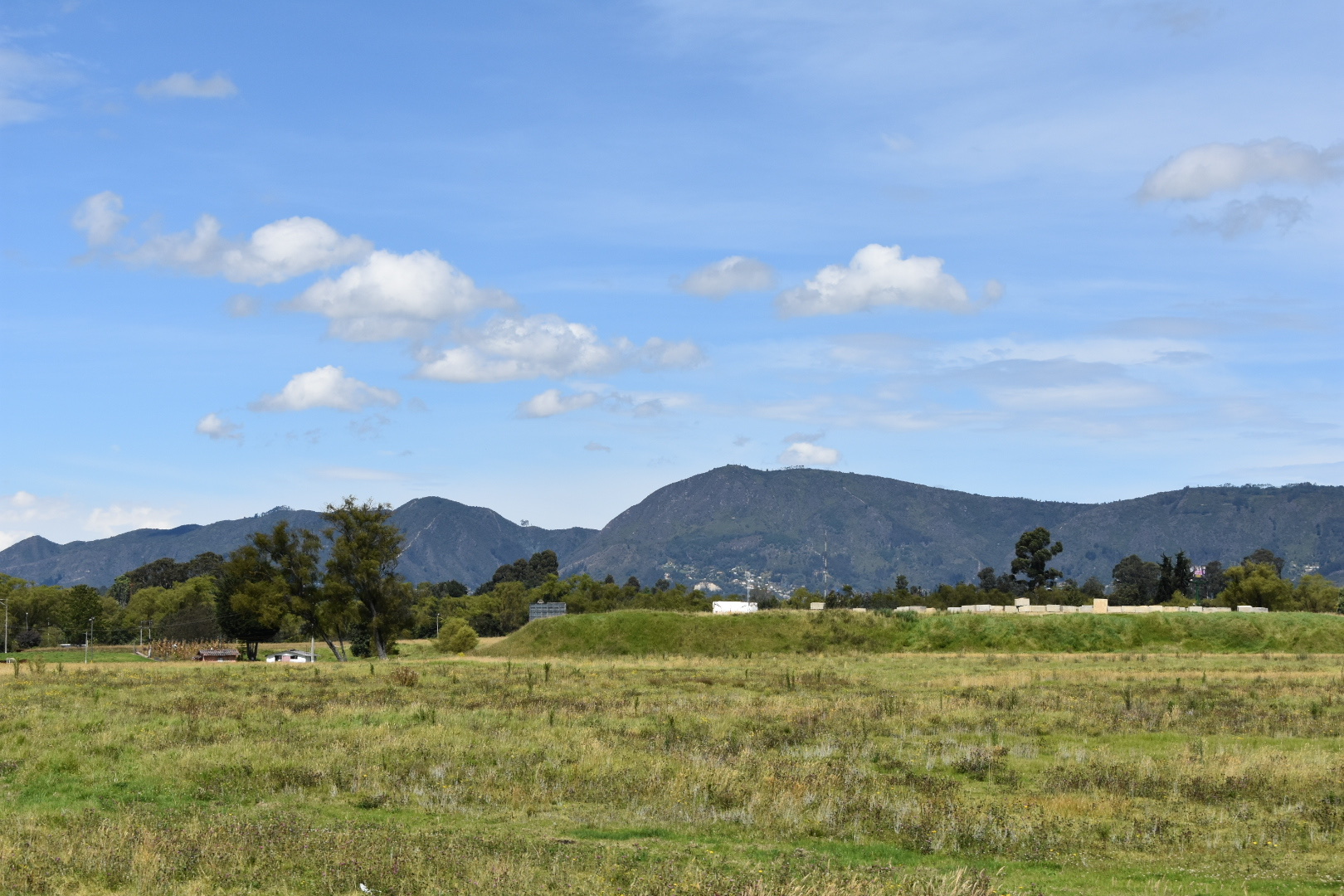 We seemed to be building up a rapport with the drivers, as Lorenzo was happily chatting with the woman across the isle, which would pay us dividends later in the afternoon. The drivers invited Lorenzo into the cabin to help drive the train. I was hoping they would invite me next but sadly no invitation followed. 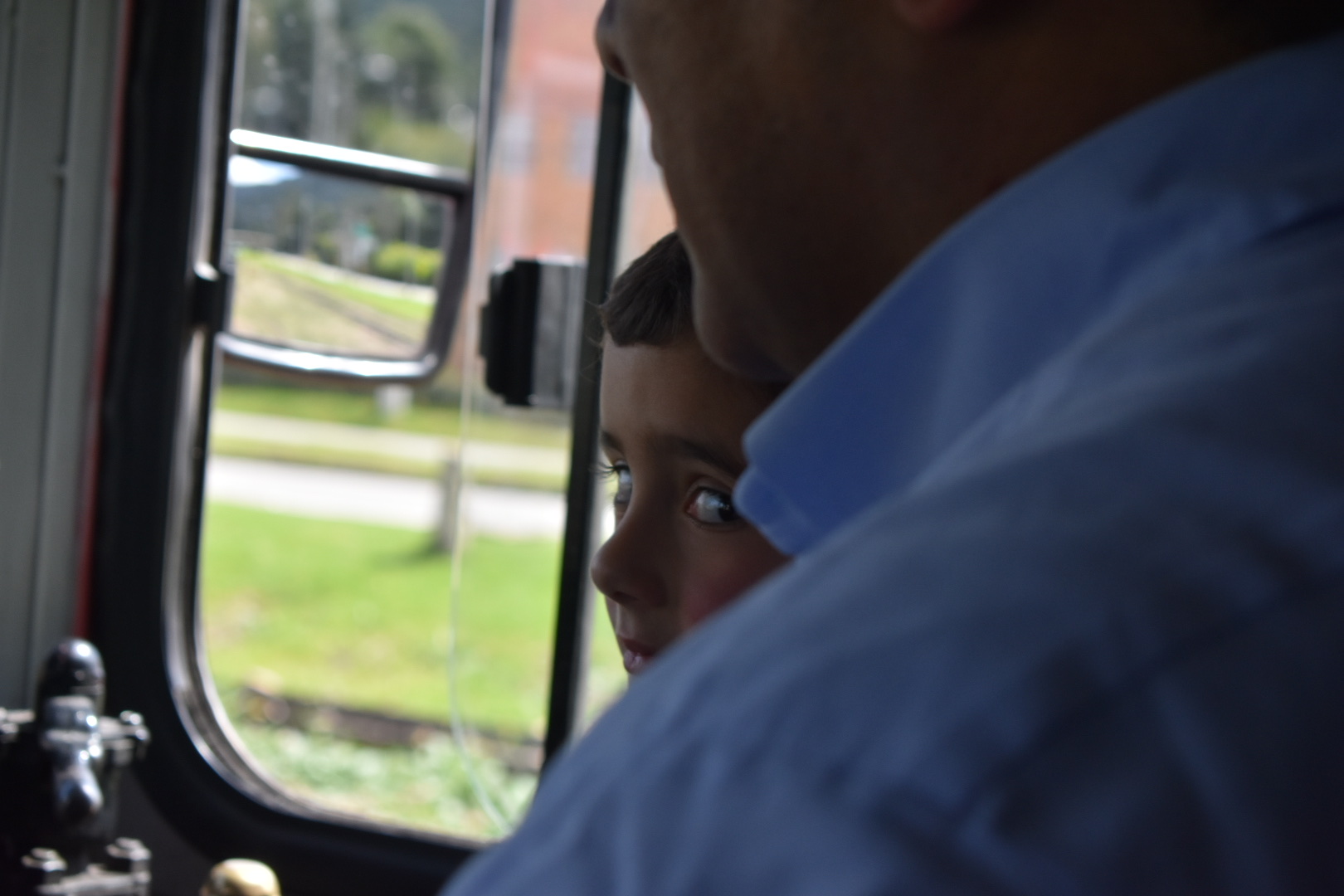 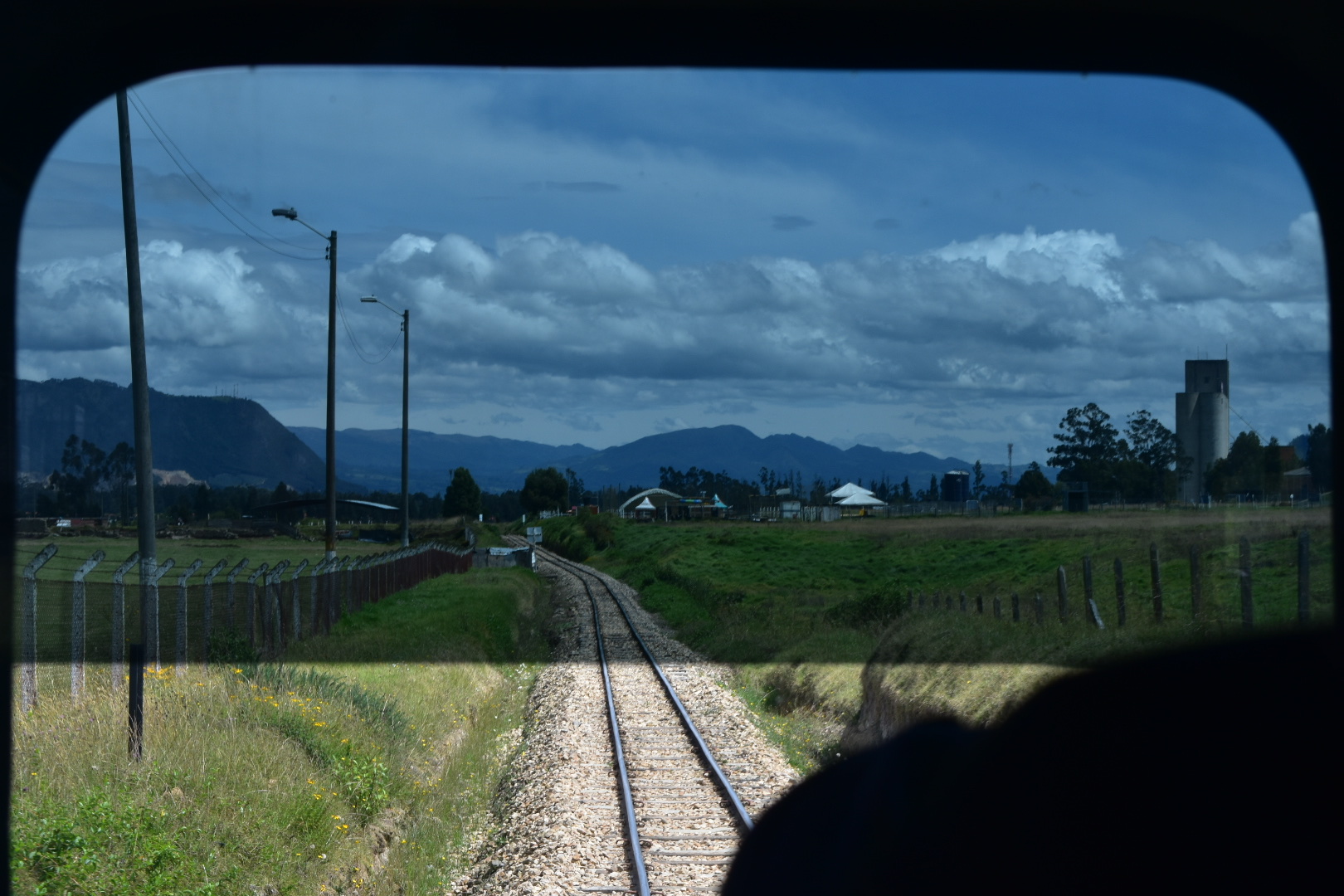 The journey is around 2 and a half hours and there is plenty to see. 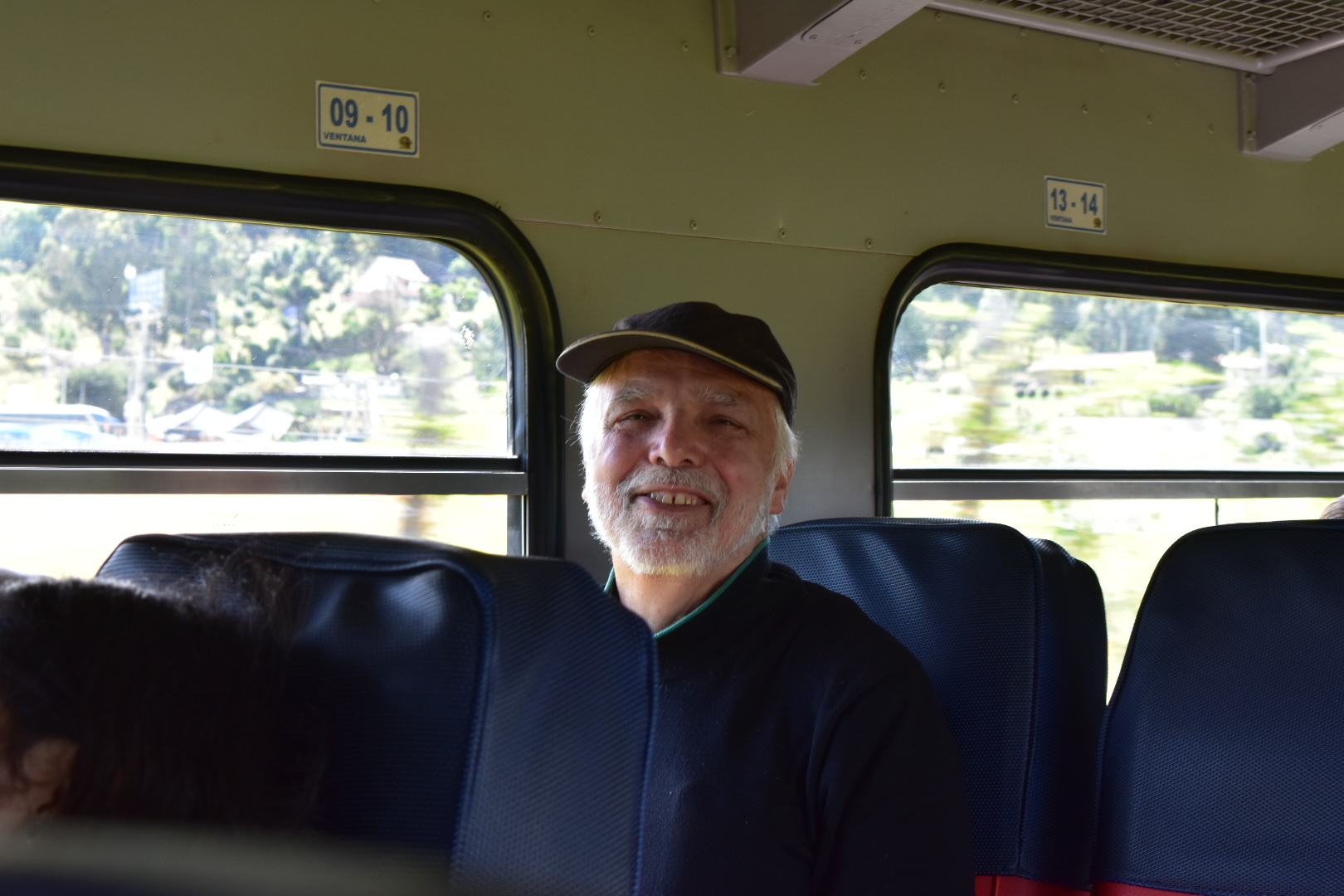 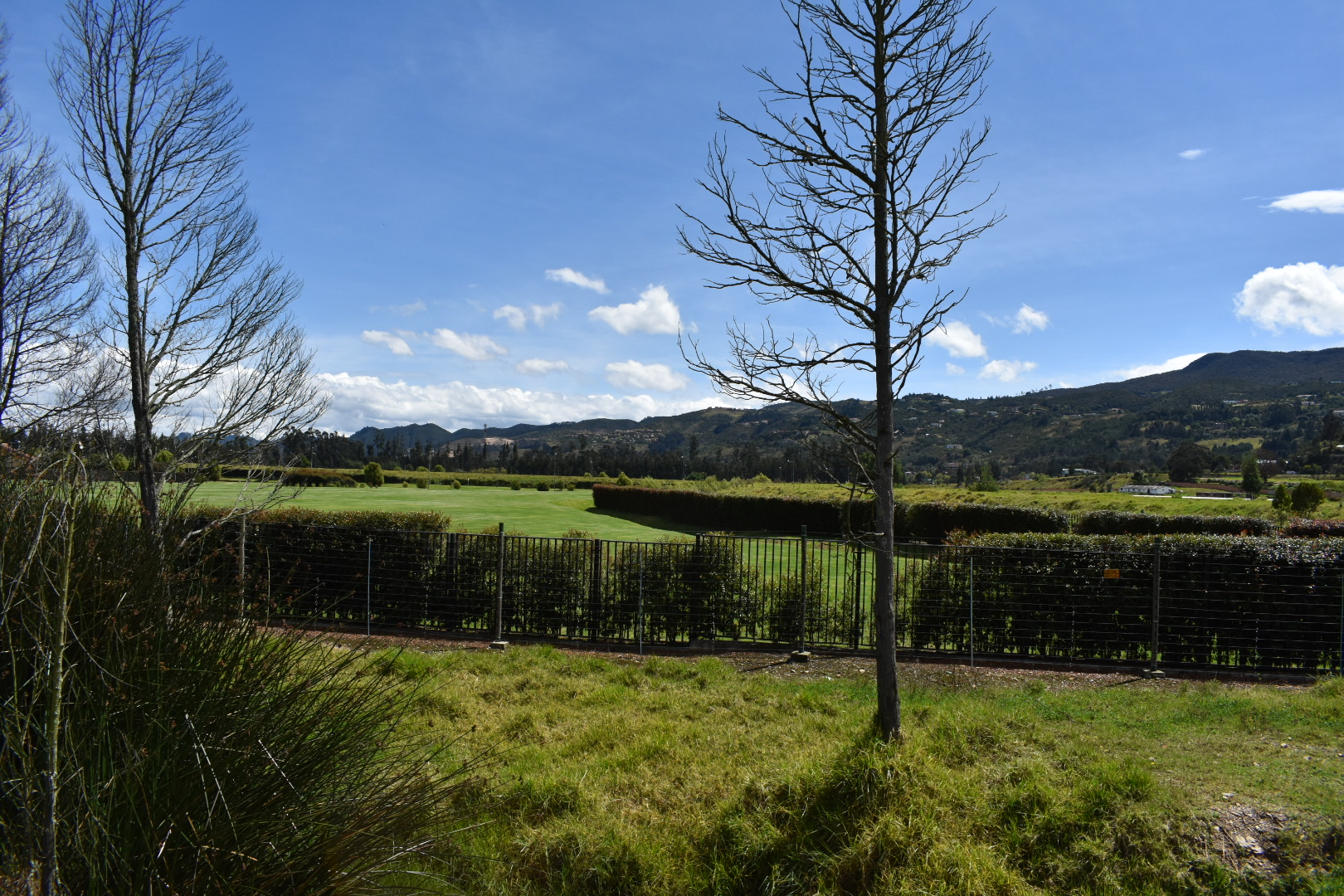 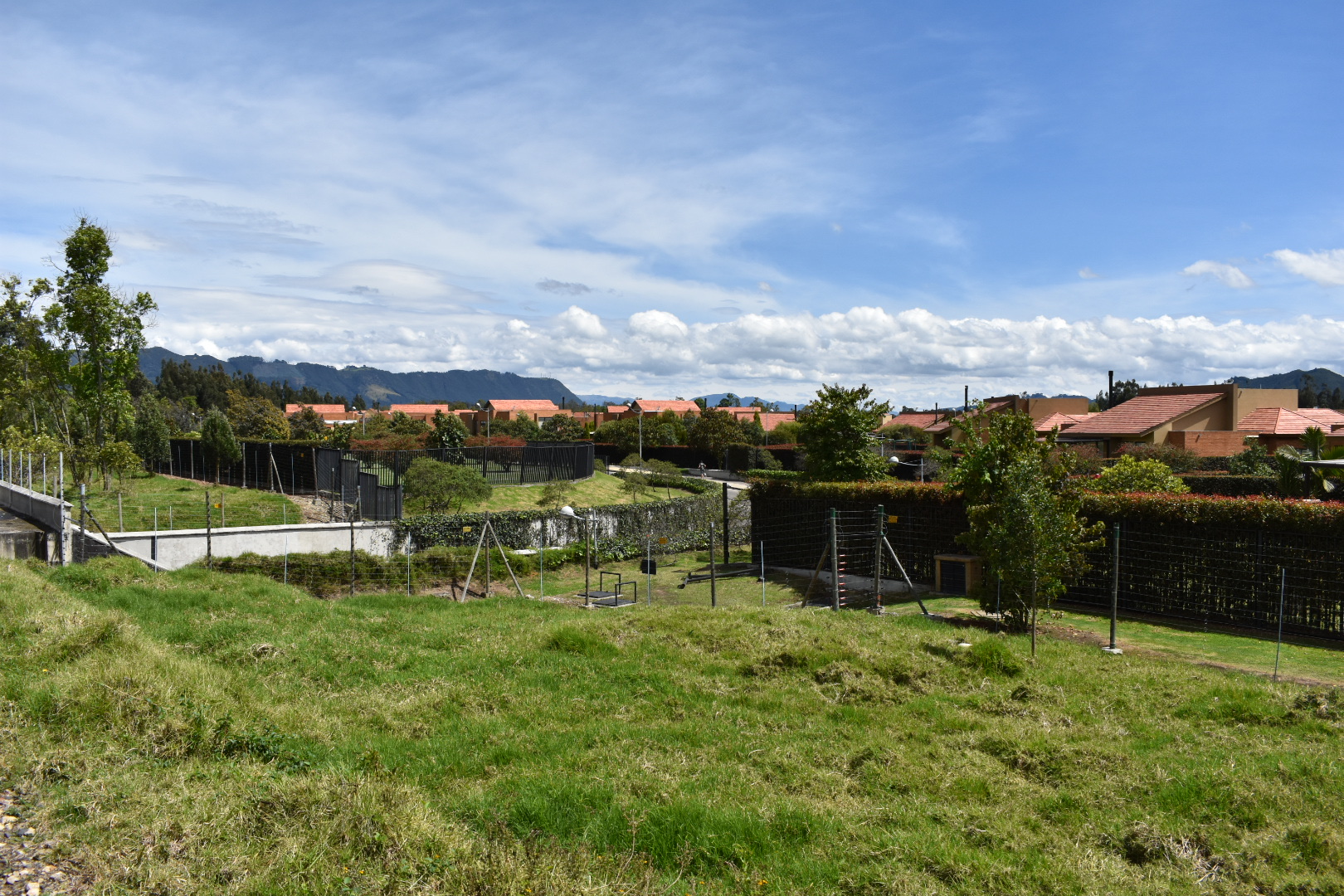 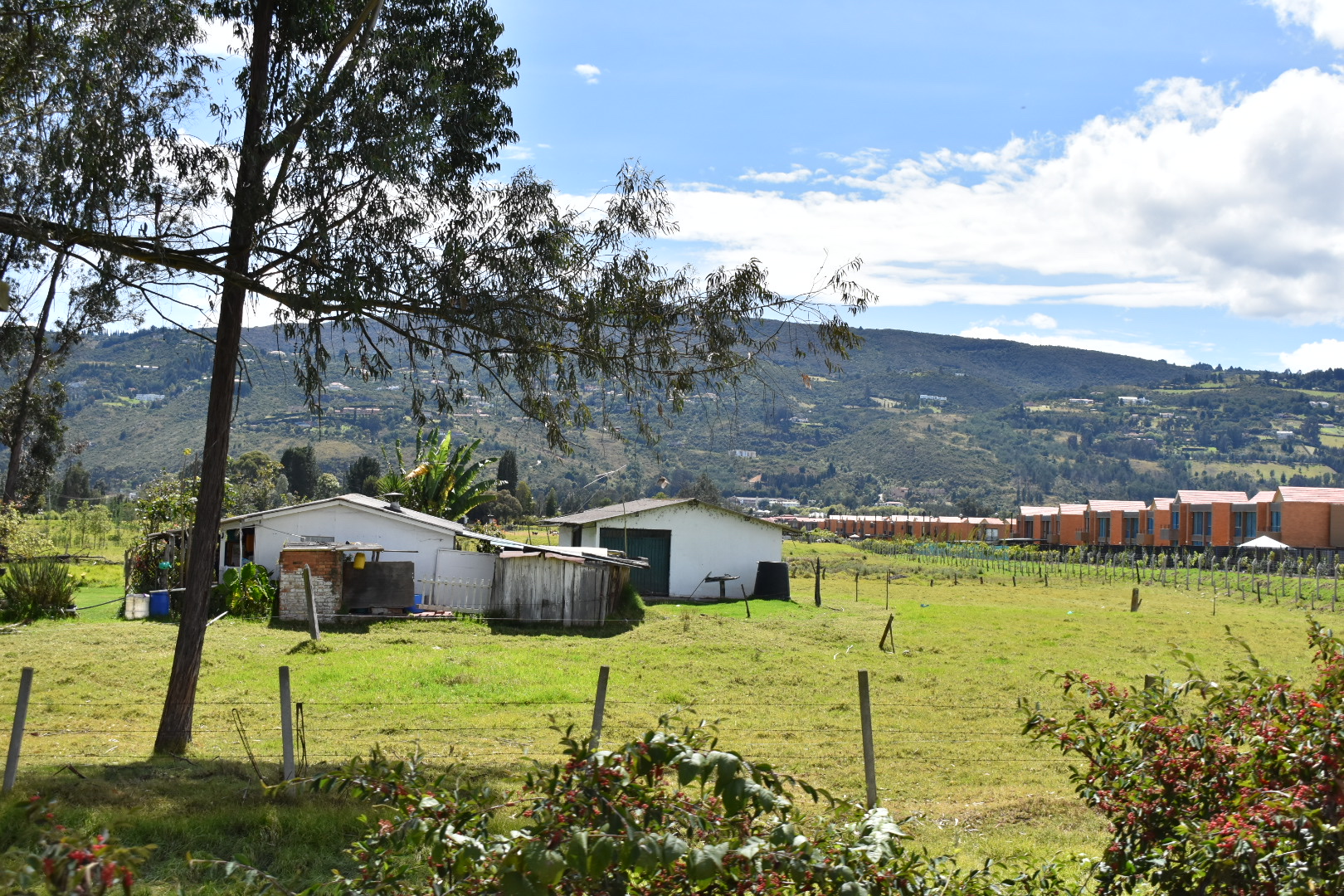 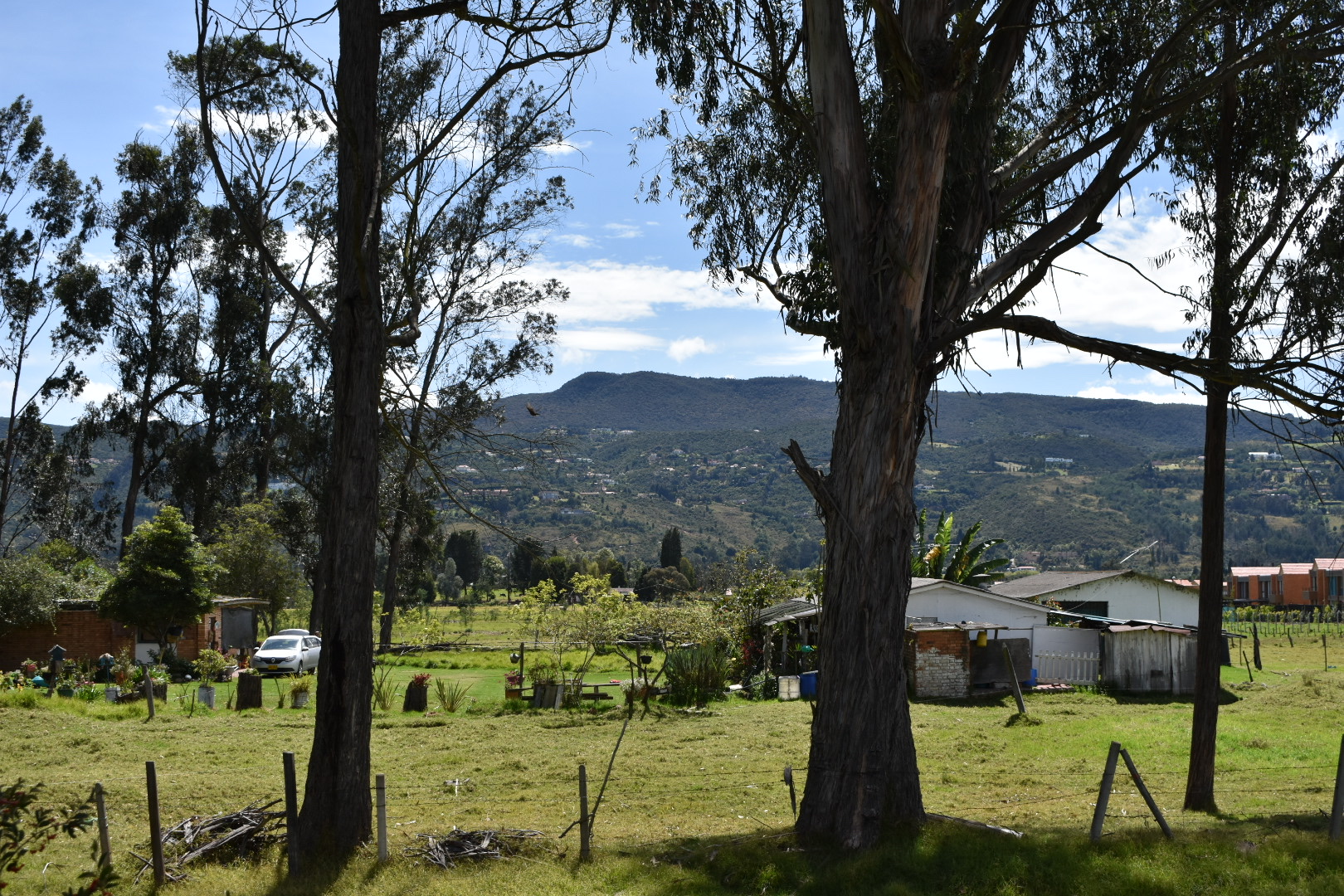 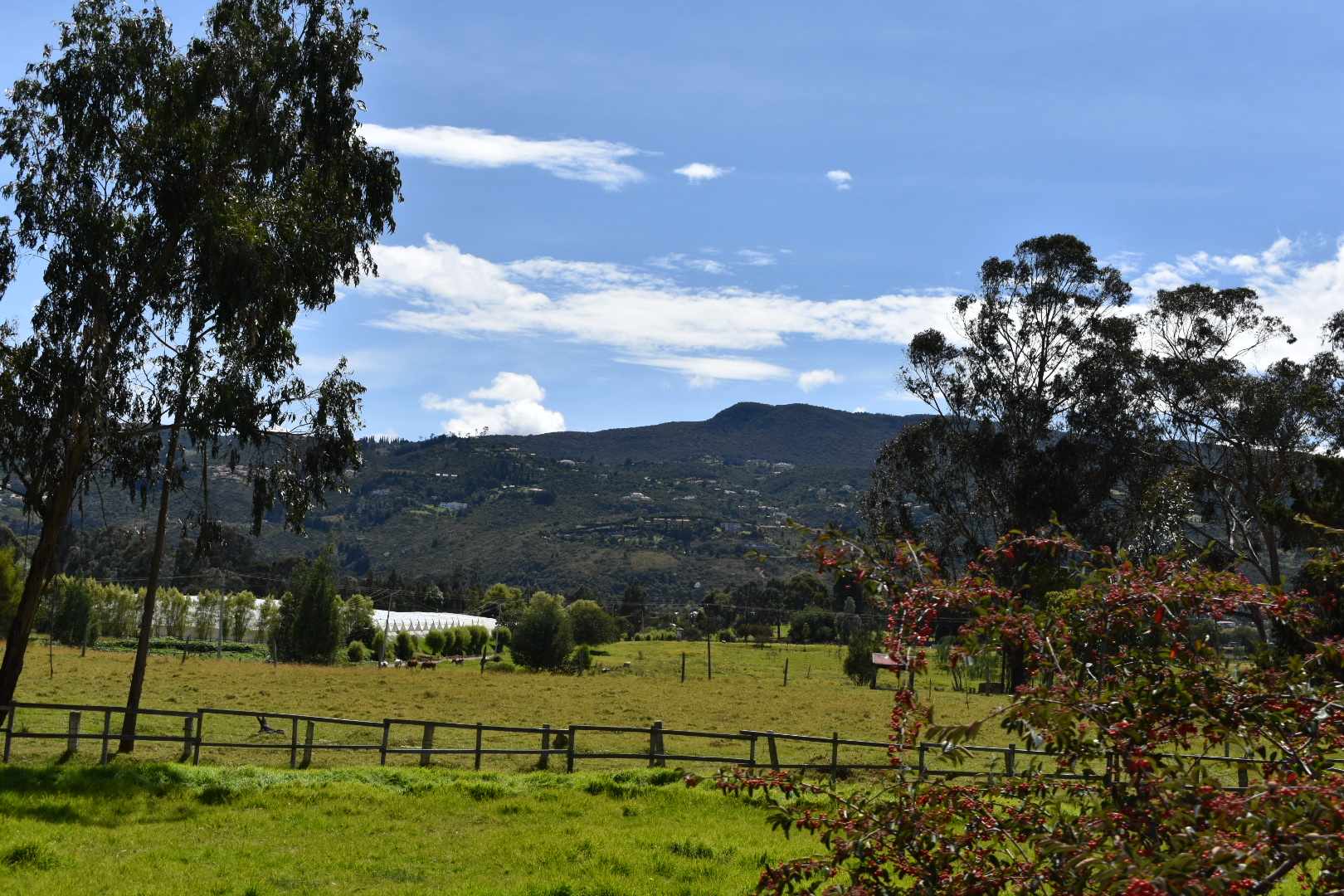 One of my favourite aspects of the journey was the variety of ways the traffic is stopped for the train. As I mentioned above in the city there are special crossings with barriers that are operated by someone close by. Outside initially I noticed there was someone on a motorbike rushing ahead of the train to each of he crossings, they stopped the traffic and sped off to the next position before the train arrived. Further on there was police who blocked off the larger roads. 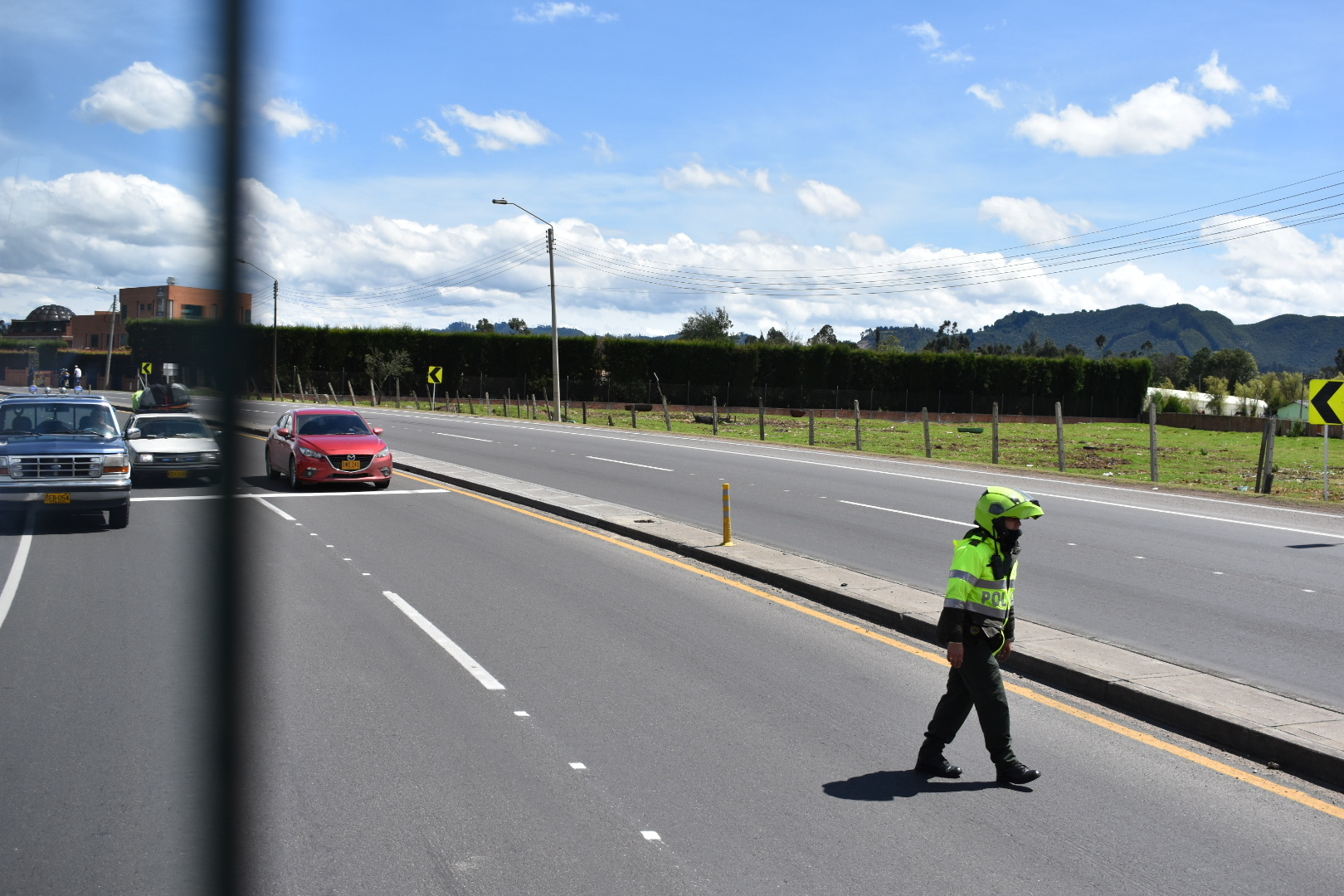 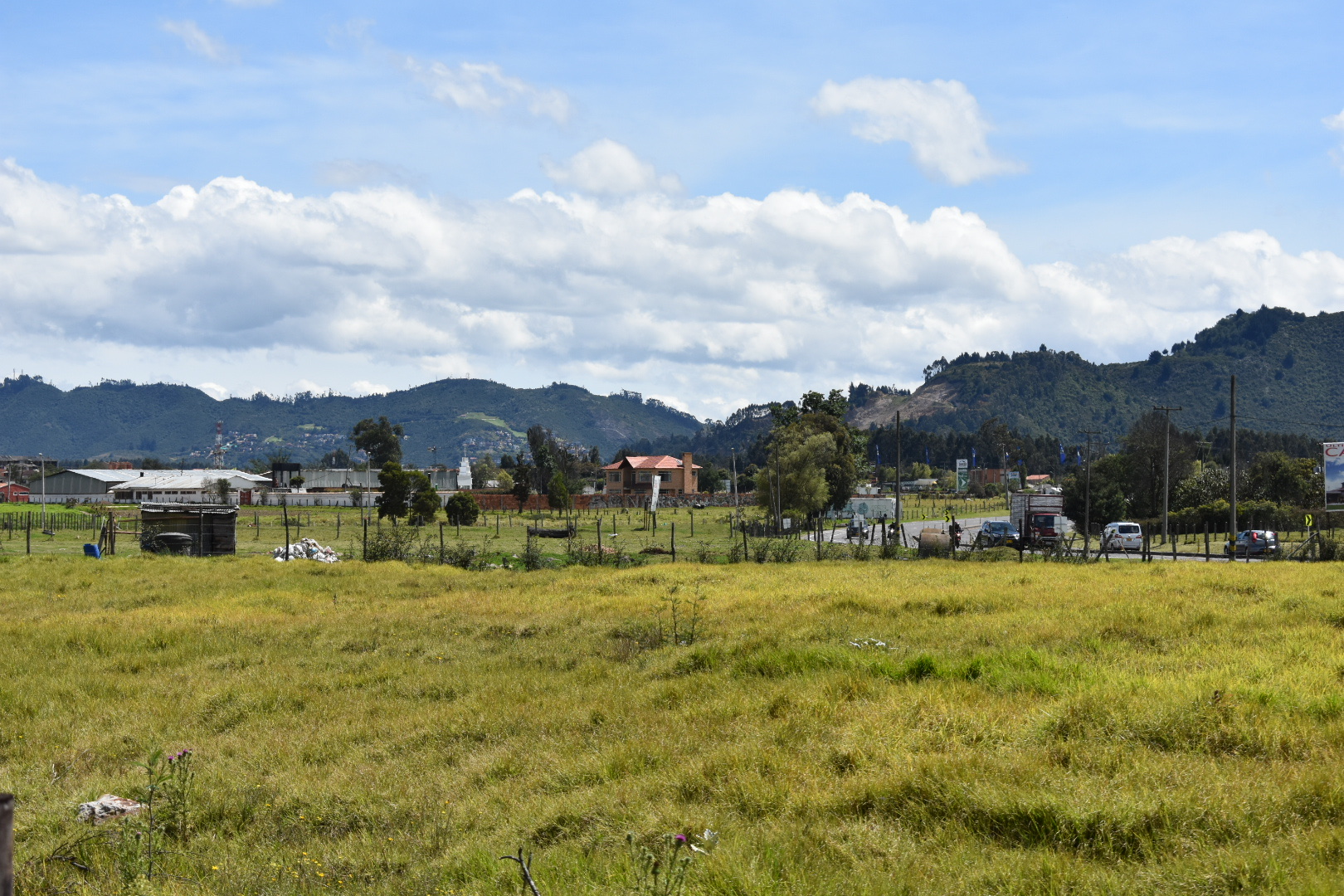 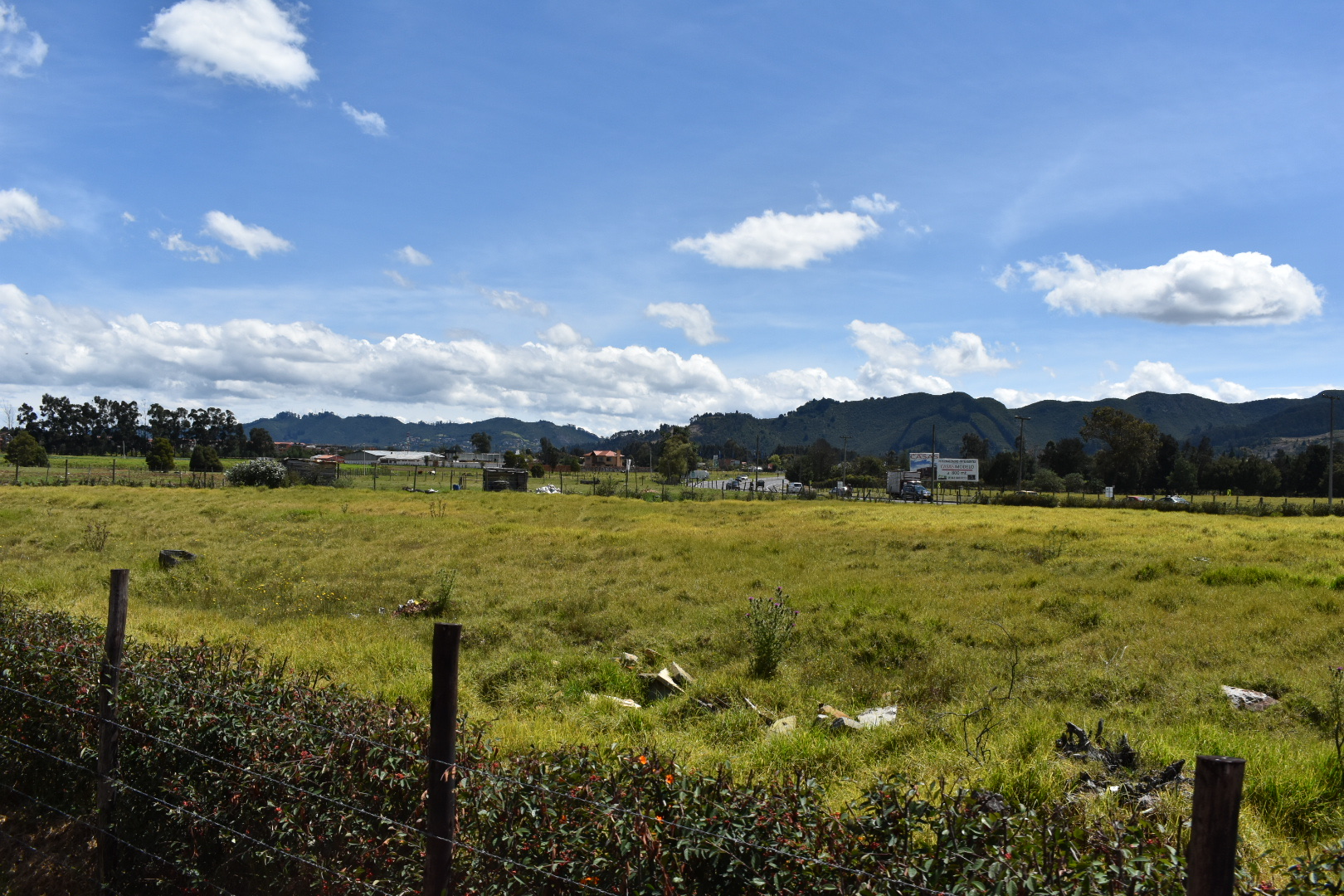 At Zipaquira we were joined by this small train which went ahead of us. At each road the two guys hanging on to the back would jump off, stop the traffic and jump back on again, all while the yellow train kept moving. 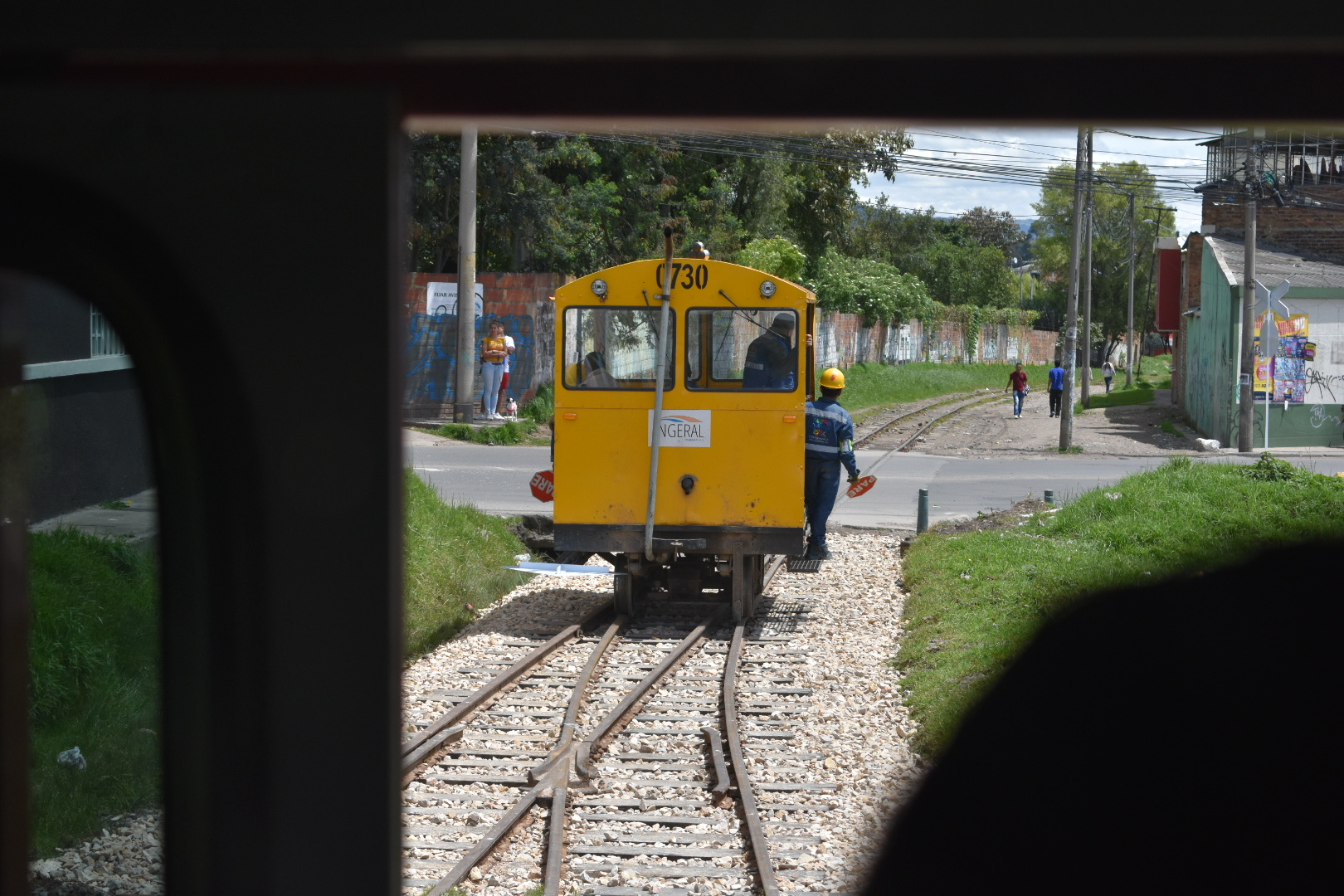 And there were more mountain scenes. Lots of animals can be spotted from the train, especially cows which seem to be Lorenzo’s favourite animal to spot. 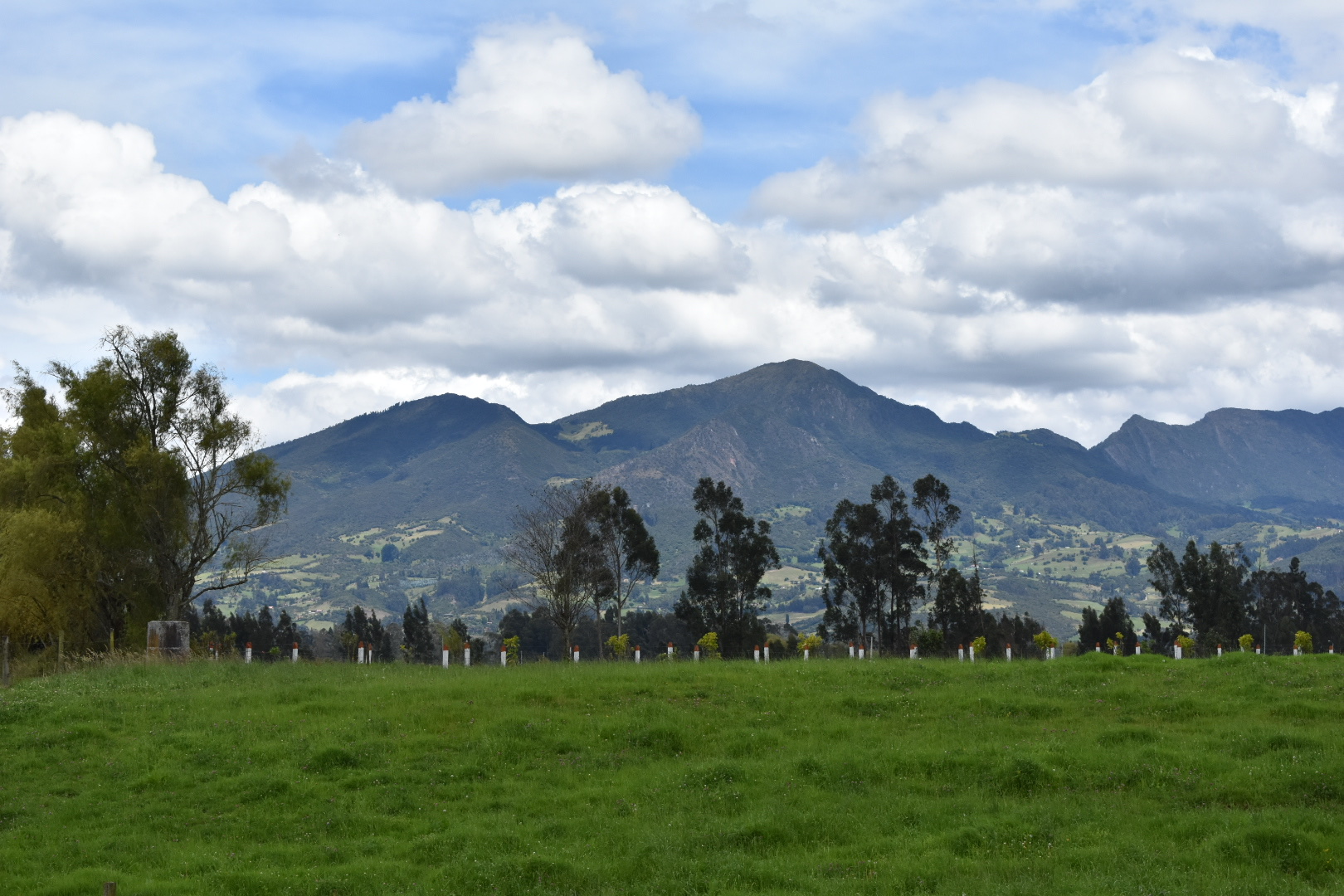 The train arrived in Nemocon at the scheduled time of 11am and when we got off the train the local school band was playing. We were led through the town by the one of the guides to the Mina de Sal – there didn’t seem to be anything official about this and if you wanted to do something else then you by all means can – the ticket does not include entry to the mines and the train stops for around 3.5 hours, which seems like a long time.

The mines are the other side of the town which is really picturesque and definitely set up as a tourist attraction based on the number of restaurants available. If you came on your own time its a nice way to spend a day relaxing. 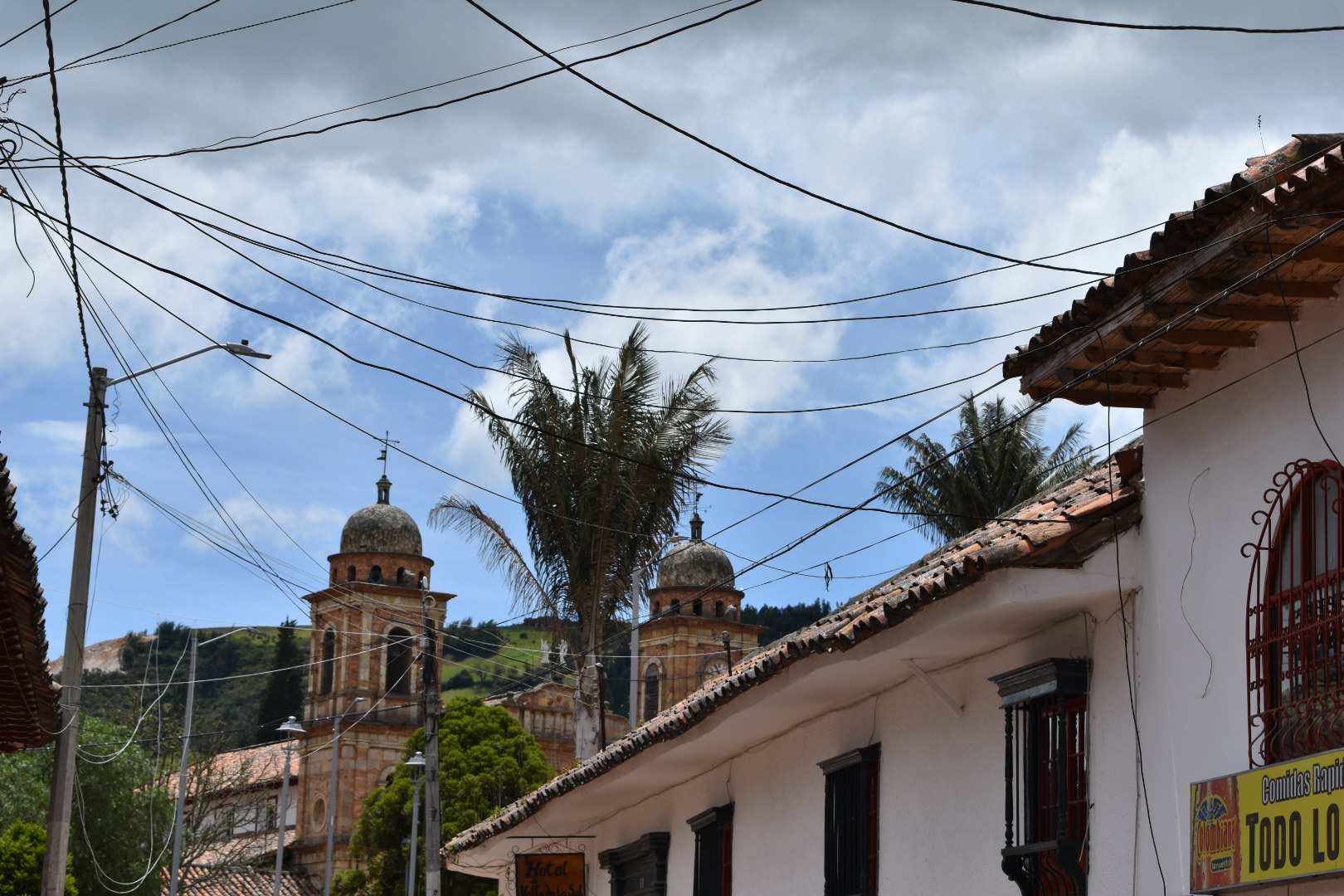 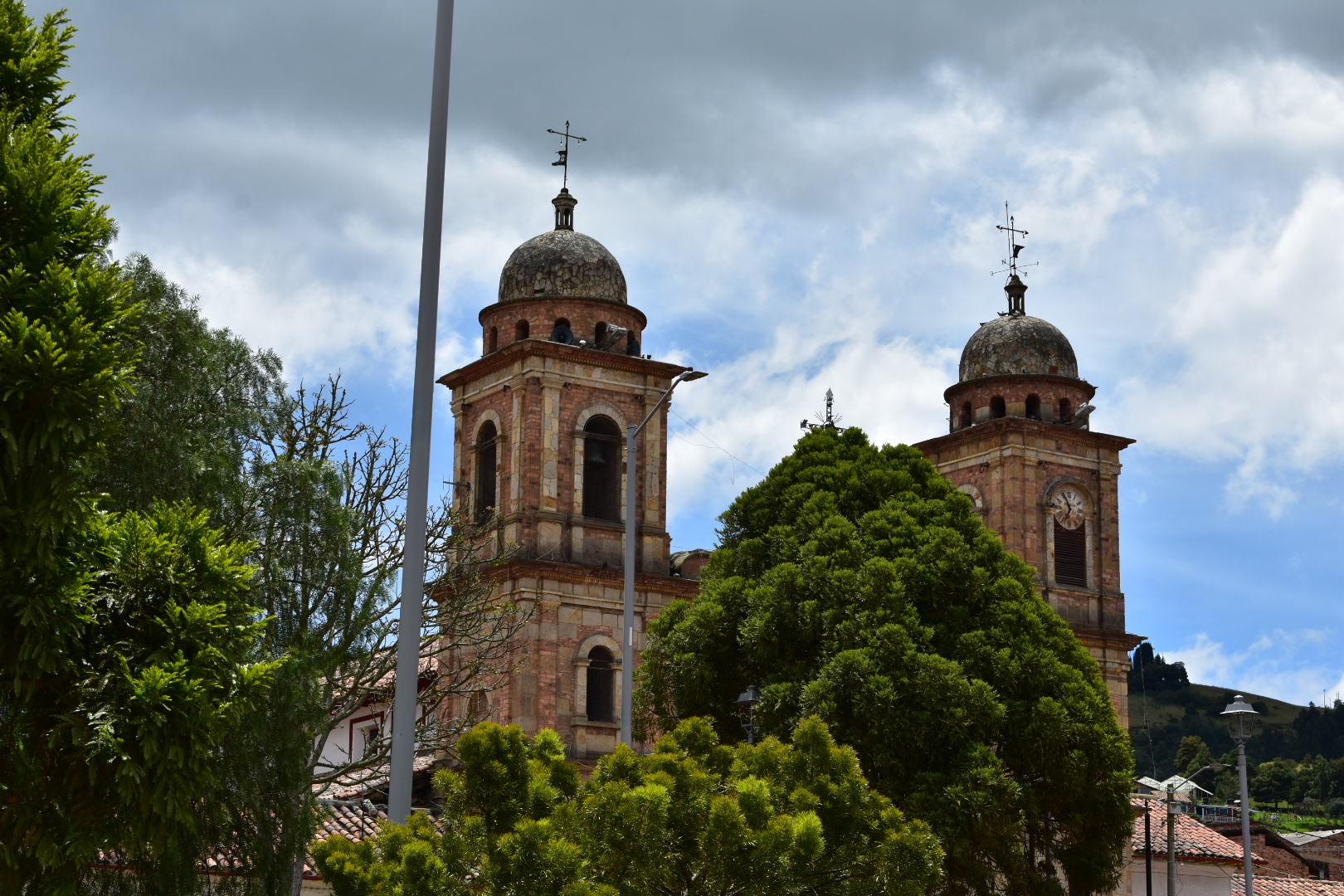 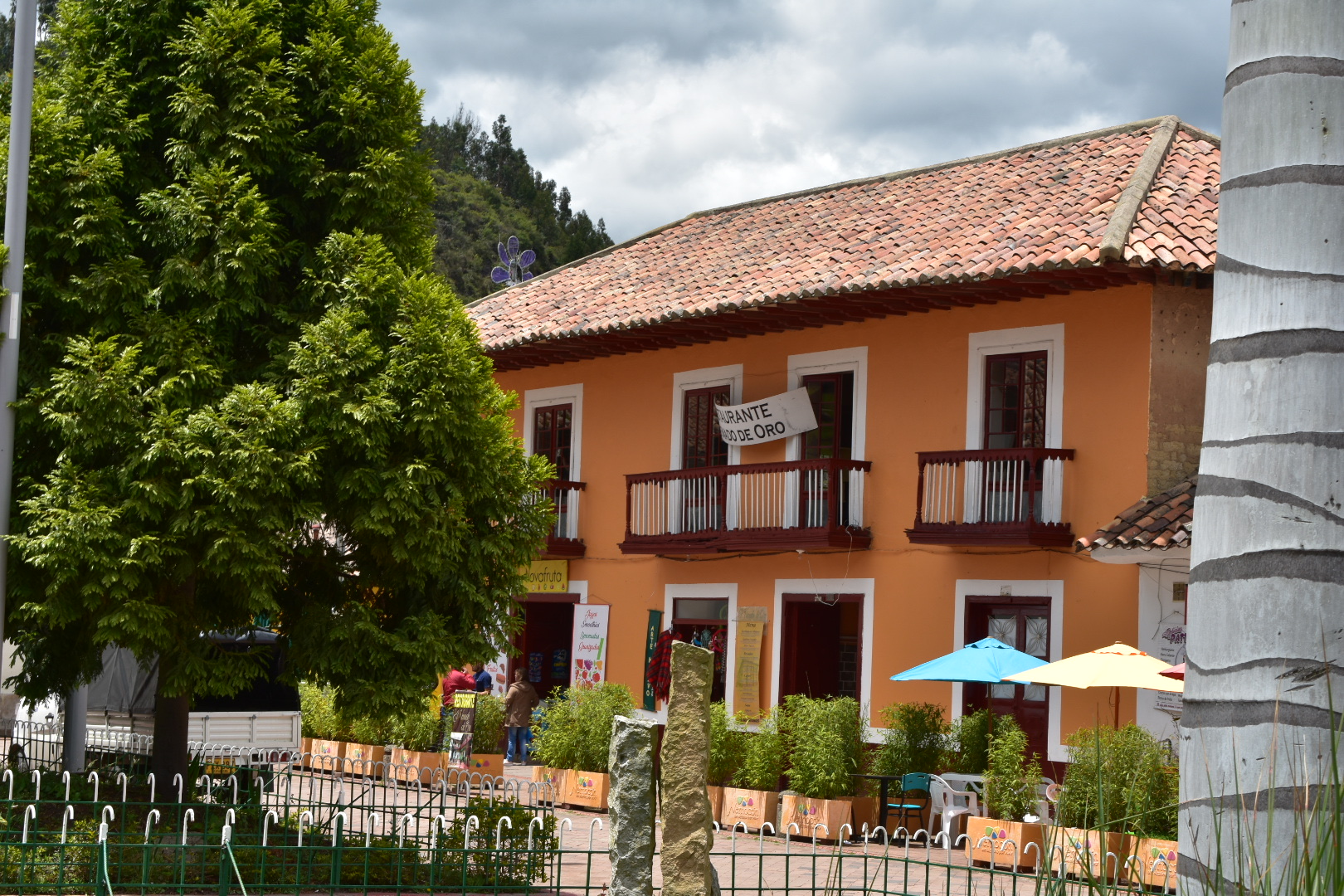 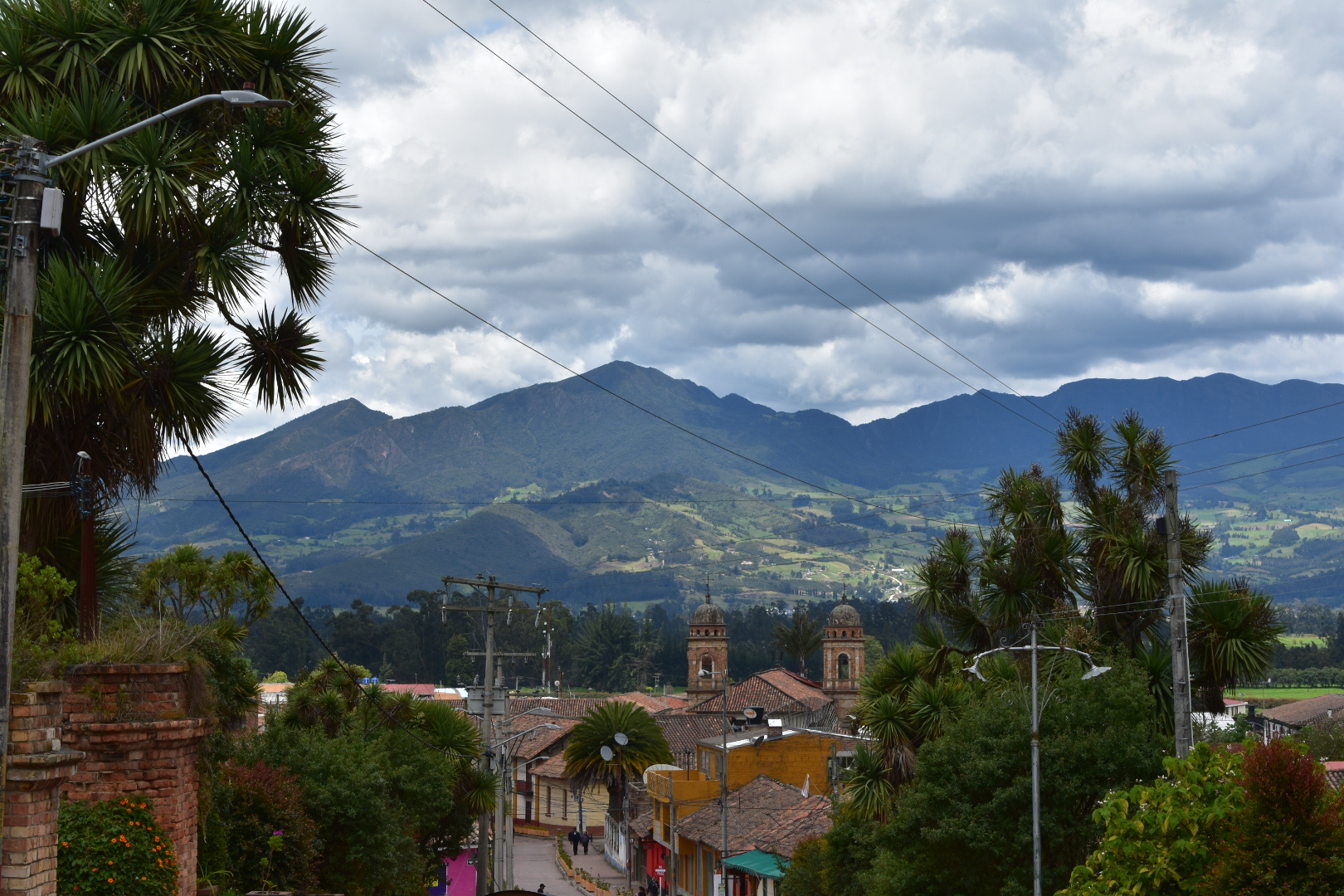 Then we reached the entrance and those with tickets went straight in and those without lined up at the ticket desk. We wasted away a good 15 minutes and then missed the preceding tour having to wait for the next one.

I’ll warn you now that the tour is not short. At this stage I wasn’t really paying attention to the time and after a shortish wait we were invited into the museum part of the tour. This covered a lot especially geology, how the andes were formed and all the ancient animals that could be found in the area. It’s all in Spanish so if that is something you are still not to grips with, like me, then you can read one of the few signs in English. I wouldn’t have a problem with it but it was so long and I could see the Spanish speakers becoming agitated.

Then we were given our hair nets and hats and sent down into the mine. Its important to note that this is still a working mine. The areas that you see are just for tourists but worker access other areas.

You go down several set of steps and are told to be careful and then begins the longest tour of a mine in history. I joke, I do think this is a fun day out with some spectacular views but the tour is overly long. The second chamber is great, especially with the light reflections on the water. 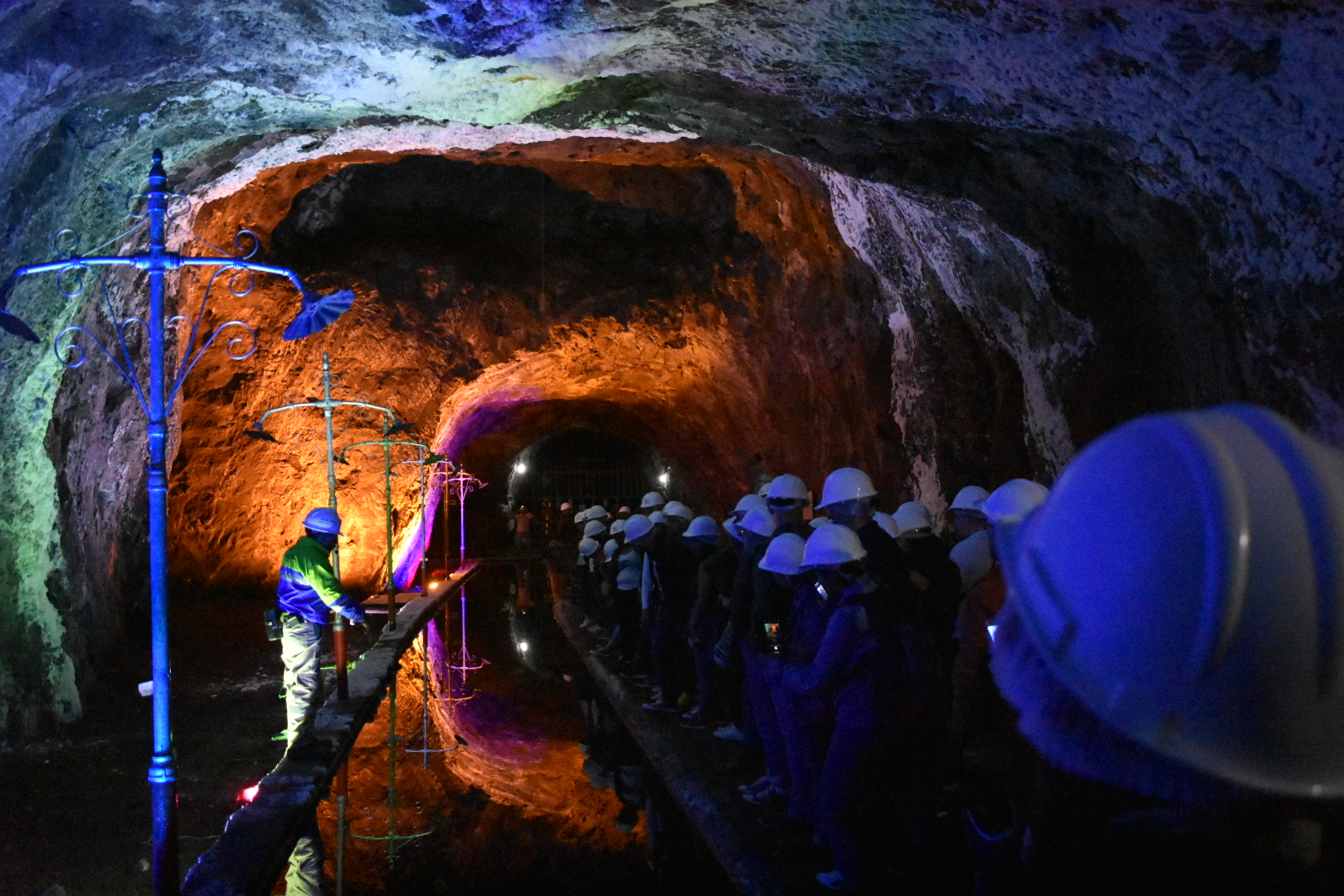 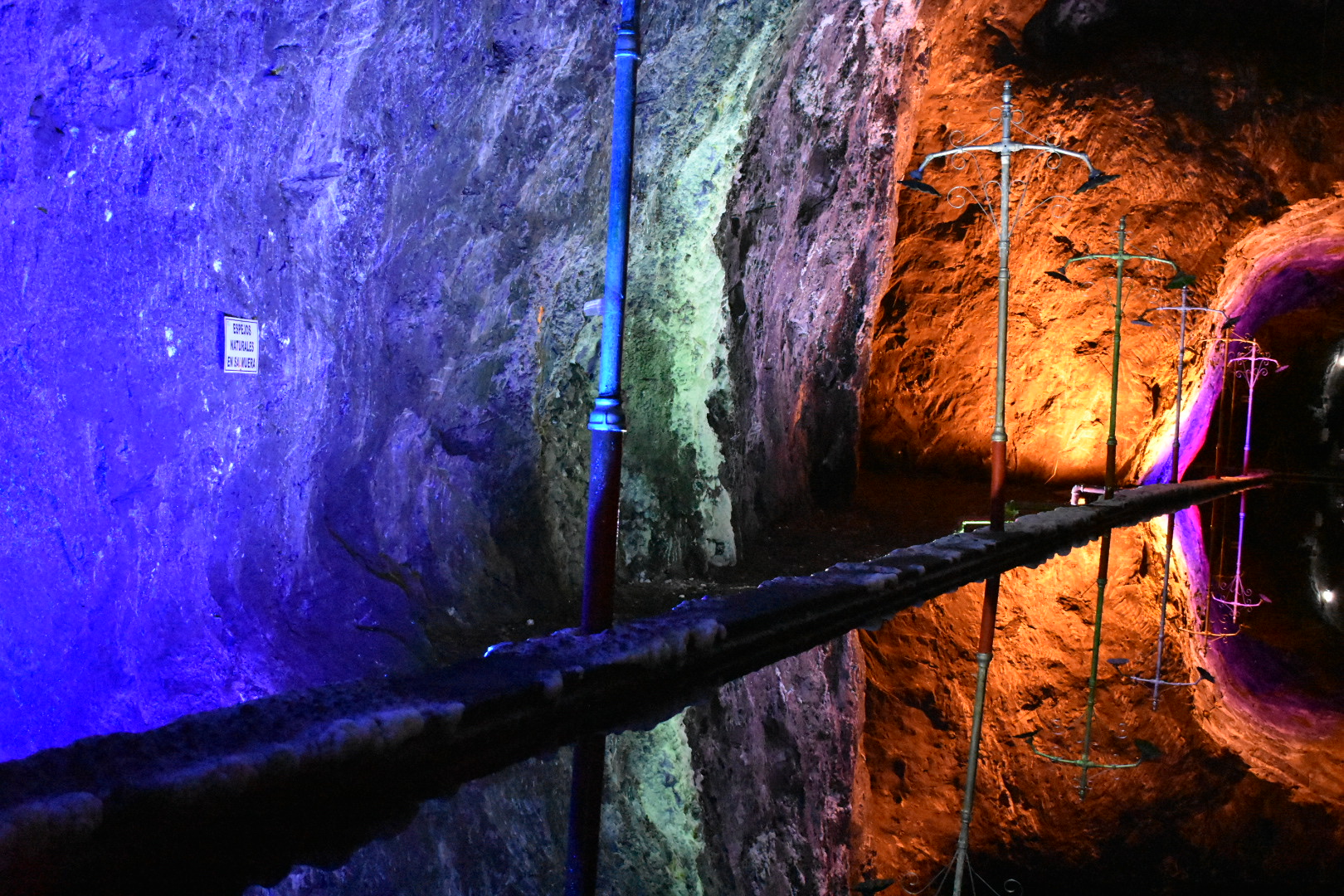 You and your friend can pay to have some whacky photos taken. We decided not to take up the opportunity but I enjoyed taking photos of proceedings. 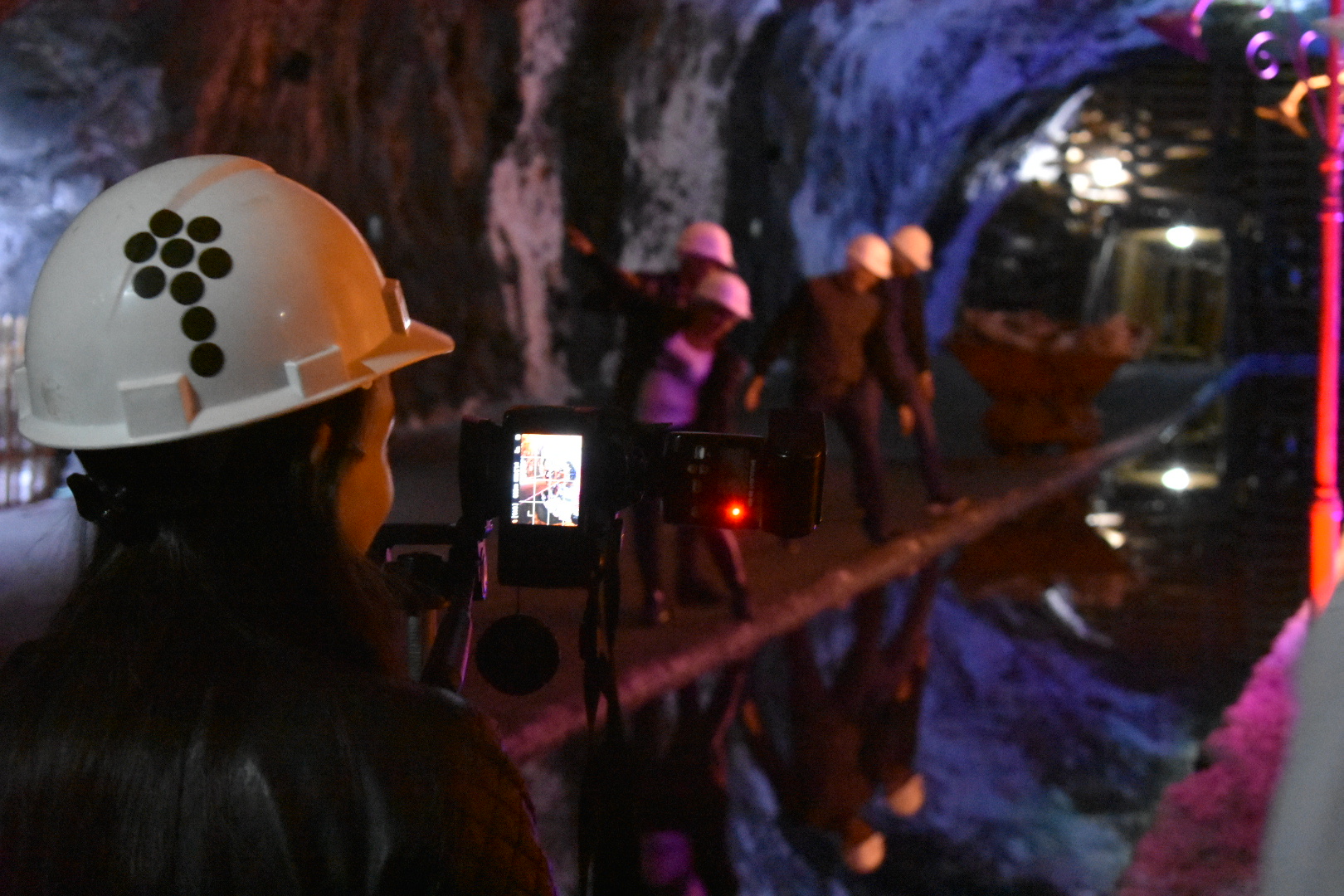 The three of us went a little rogue and started following at our own pace, I’m sure to the annoyance of the guide but finally I was able to fulfil my long term plans and send Lorenzo down a mine – sadly he was costing money and not making any. But baby steps.

I really loved the markings and textures of the rocks. 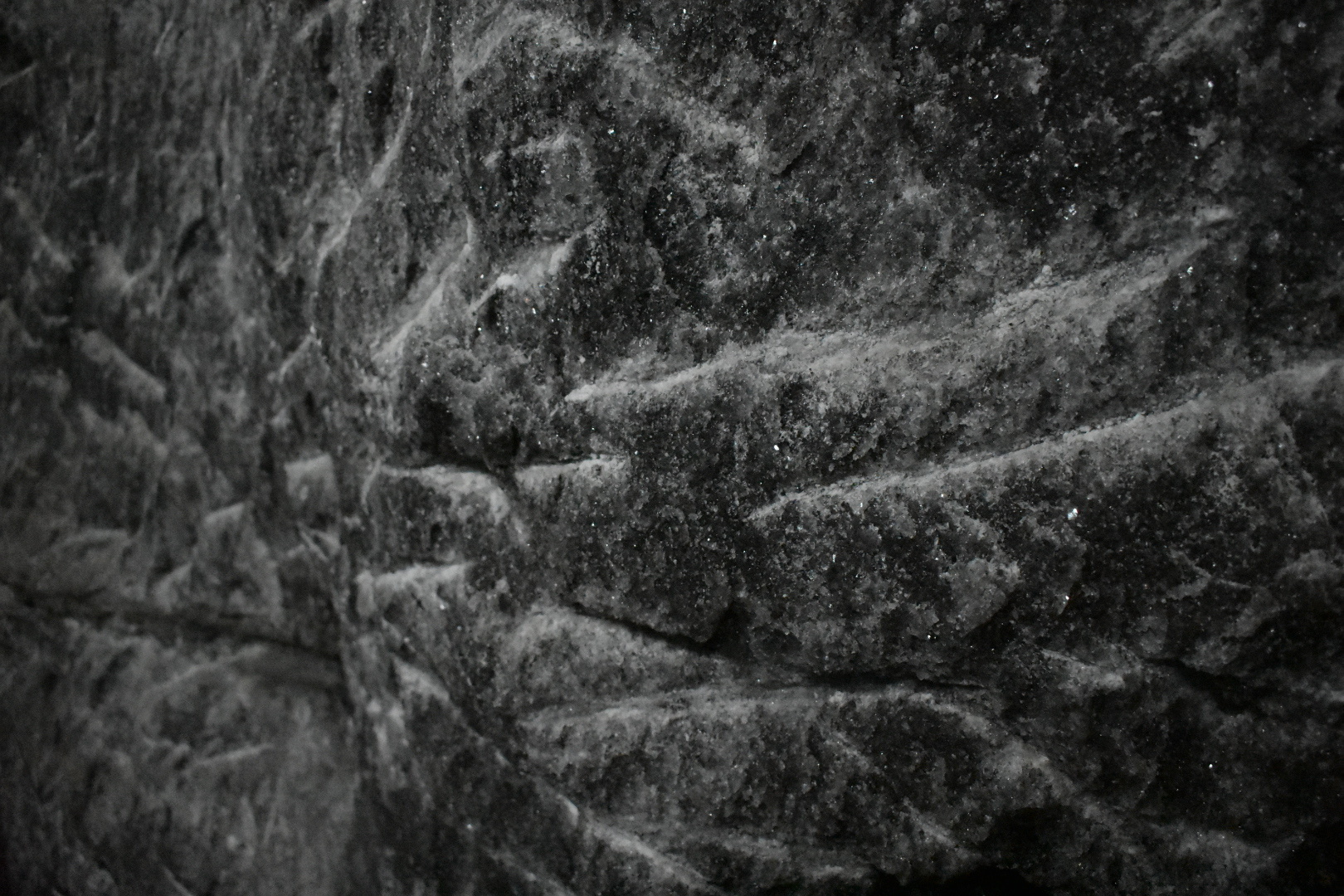 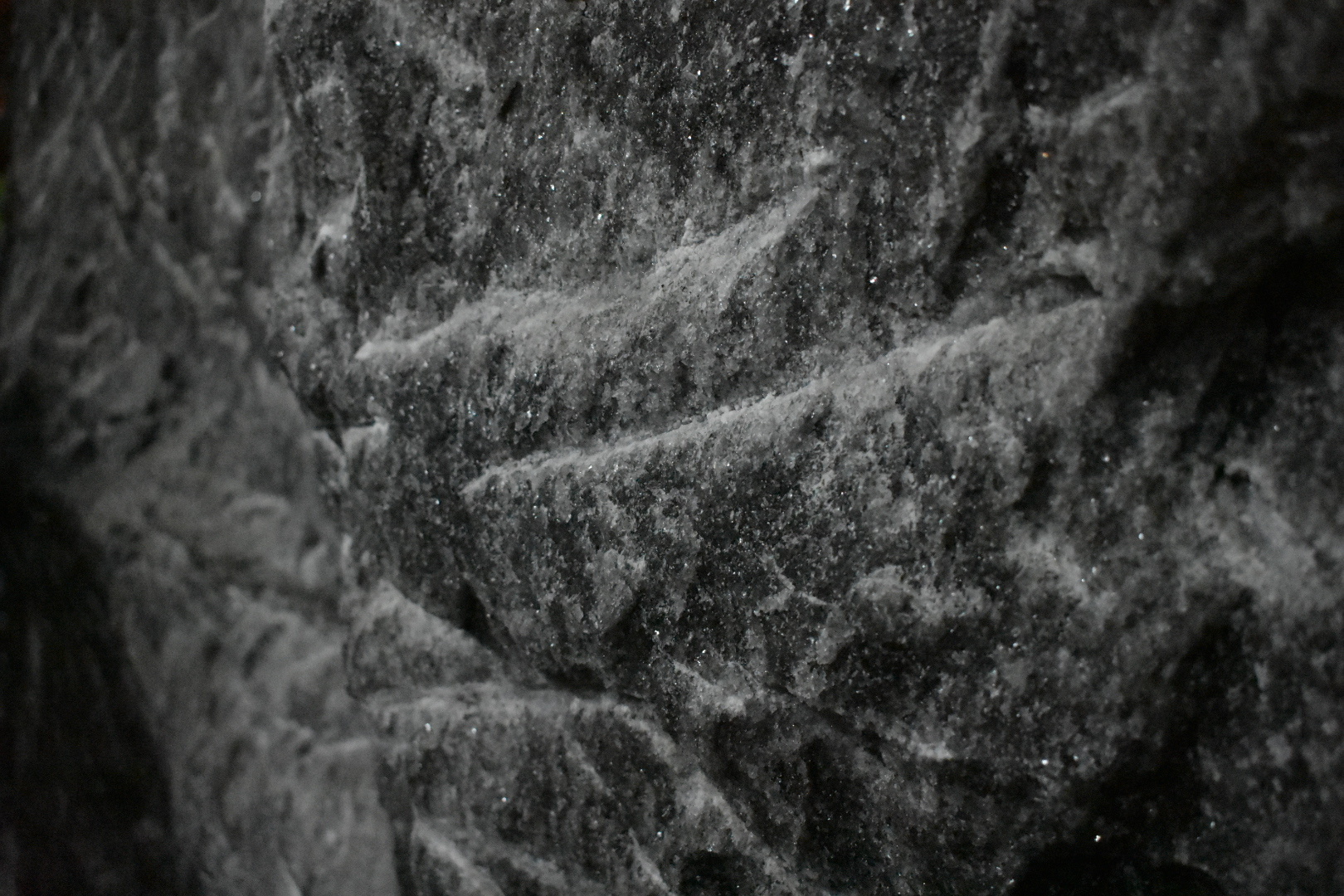 And of course the tunnels. I’m also a big fan of tunnels.

Its also important to note that this mine was used for the setting of The 33, a movie about the Chilean miners trapped in 2010. 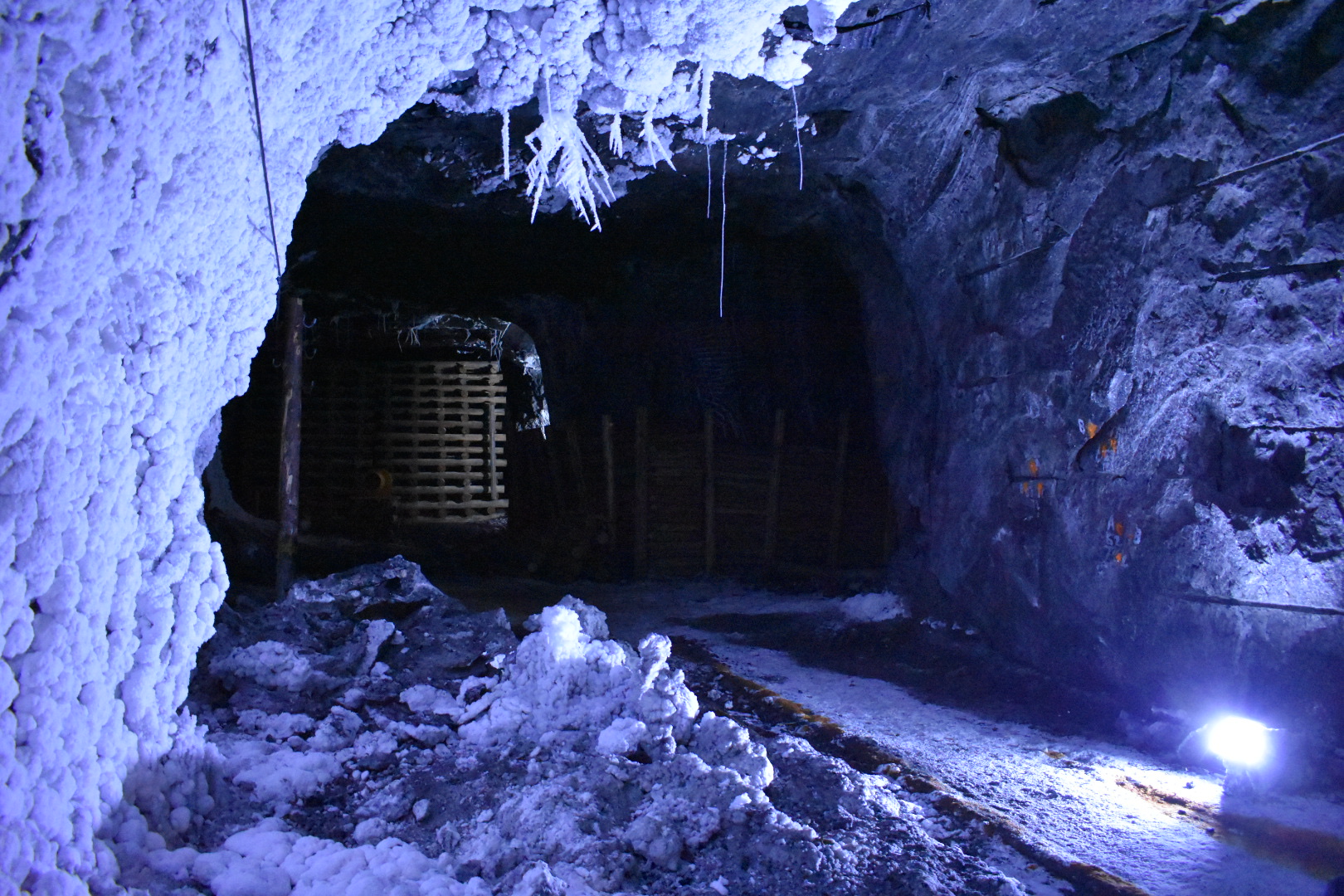 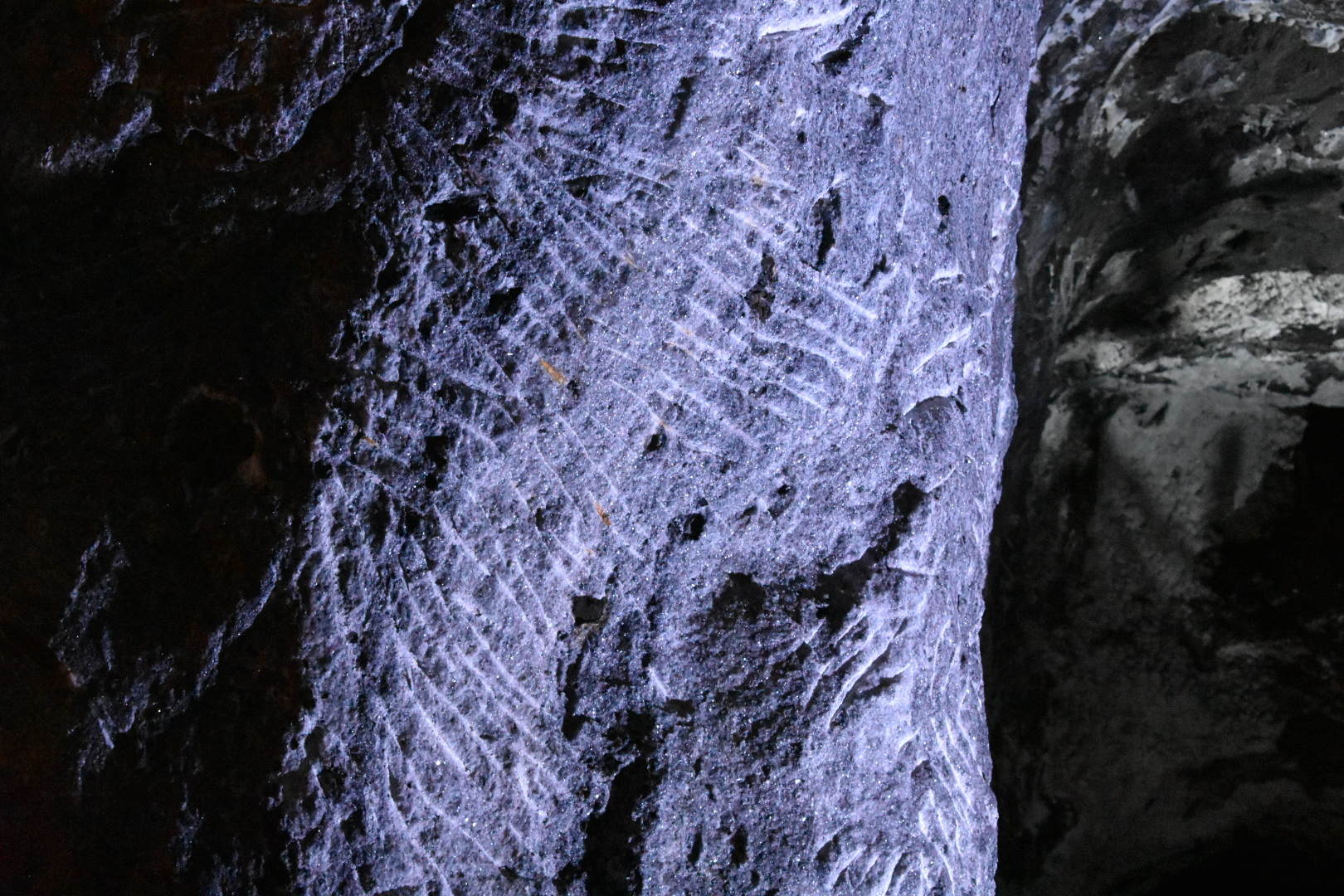 And of course being in South American there was a dog in the mine!

We were able to leave the mine just after 1:30pm which didn’t give us much time for lunch. We squandered precious time looking for a restaurant before settling on one that was close to the mine. This is why I suggest you buy the tickets in advance, just to give you time to have some food and explore the town afterwards rather than rush like crazy as we did. In about half an hour we ordered, had piles of food delivered, had a take away arranged for the food we couldn’t eat. Then to top it all off there was a problem with the bill that needed fixing, Lorenzo wanted a balloon so the waitress fetched that rather than sorting the bill and we managed to eave the restaurant with about 2 minutes to spare before the train left, with a 10 minute journey to get there.

I put him on my shoulders and ran and we arrived about 10 minutes late. Somehow the train was still in the station waiting for us, but I think it was only because the woman at the front had asked the driver to wait and they of course had remembered Lorenzo – if we had been sat anywhere else they would have left. And I know that as pretty much as soon as we sat down the train pulled out of the station. I wondered if we had messed up the timings for the crossings. 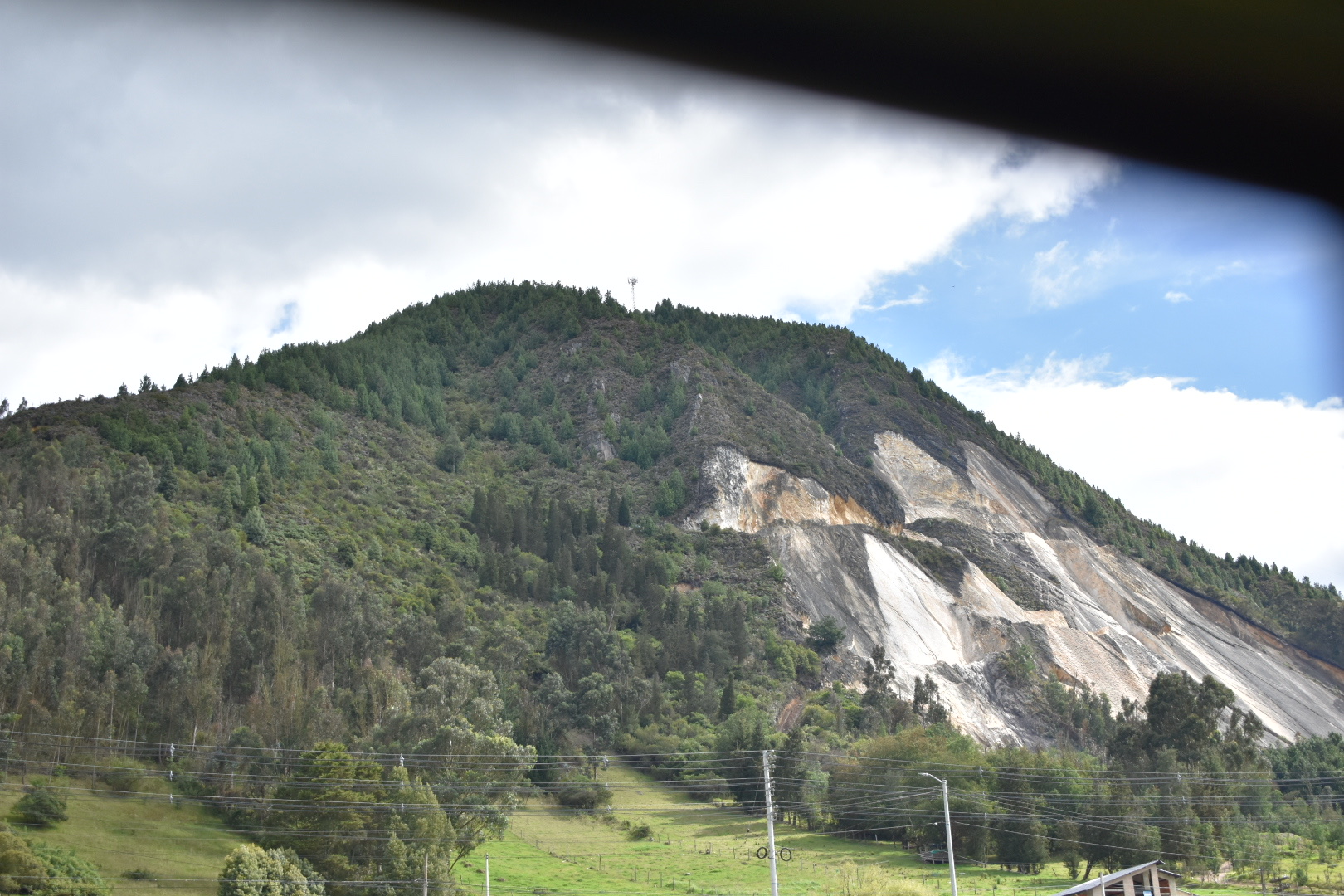 The journey back was largely the same taking around 2.5 hours. I was exhausted after the stress of getting the train and running but it was a fun journey. We grabbed a few more photos of the train before it left the station when we arrived back in Bogota. All in all it was a good day, a little expensive for Colombia but trains here are few and far between so if you want to take one this is the perfect opportunity.

And here is us together after disembarking.

For the most recent information do check the Tren Touristico de la Sabana website, which is also in English. Currently trains go to two destinations Nemocon, only on Sundays for the Minas de Sal, and Zipaquira, for the Salt Cathedral on weekends and holidays.

Tickets can be purchased online or at the stations in Usaquen or Sabana stations. Check the departure times as these are subject to change and make sure you get back to your station on time. I would advise you to buy tickets for the attractions at the same time as your tickets or in advance on the train so you do not waste time on the day. Only cash payments are accepted on the train.

The train does sell drinks and snacks including sandwiches, but not hot food. I would advise that you bring your own as it will be cheaper.