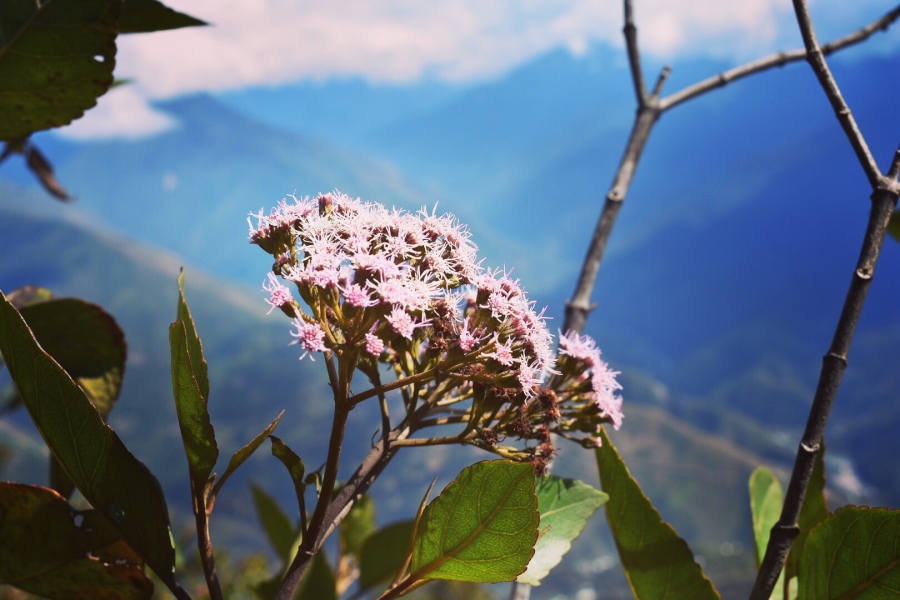 I jumped in the colectivo my guide from the El Choro trek flagged down for me and we wound our way up the mountain until I reached the small village of Coroico. It seems to be primarily a holiday destination for Bolivians set in beautiful jungle surroundings and a perfect place to escape the cold and craziness of La Paz.

I was exhausted after my hike and pleased to discover that my Hostel, Hostel Chawi, was close by, so I followed the directions and found it quickly. There was no bell so I let myself in and there was no one to be found and no obvious reception. I put my bags down and started wondering the complex, finding half of it a building site, which is a shame as it has real potential. I found a dorm and through the windows I could see that people were staying there, so that was good. I went around knocking on all the doors until eventually a lady answered. She “checked me in” in the loosest possible way but I had a key and could take my first shower in three days.

I wanted to explore but was too tired so took to sorting my photos instead. There was no wifi so it made everything a little difficult. After and hour or so two German girls returned from a day out, one had to leave right away, but the other Eva was staying the night. She told me it was just us at the hostel and she had booked another hostel for the next night. I went out to explore and found pizza so had that and an early night.

The next morning a British guy who worked at the hostel greeted me. He was in La Paz the day before and gave me a little introduction to the town and a map. There was no breakfast at, what is the weirdest hostel I’ve stayed at so far, so Eva invited me to her new hostel which had a restaurant where we could buy breakfast. This was great as there was nowhere else in town for breakfast and it was also on the way to my hike.

After a delicious breakfast I said goodbye to Eva and started on the hike to the top of the mountain on which Coroico sits, Chutokollo Uchumachi, which is a 4km hike up, and four back. Having walked further in the last couple of days and in the past I thought this was going to be easy and I planned on hiking to some waterfalls afterwards. However I massively underestimated my level of fitness.

The path starts at the top of the town near the church, so if you are in town add another 10-15 minutes to the hike. Again, the trail is clearly marked on Maps.me 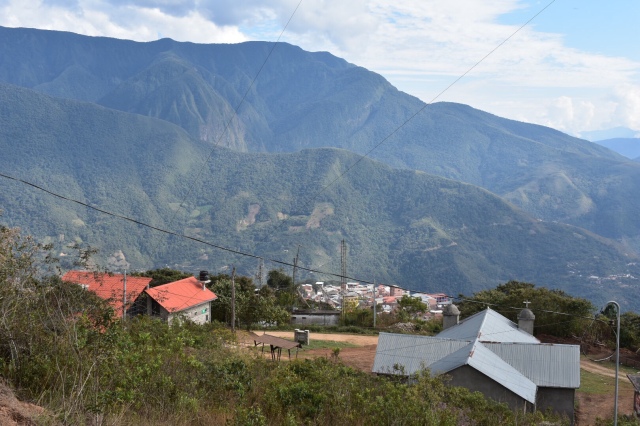 I started the climb and some locals waved at me from their house. Very quickly I reached the first morador, which is about 1.5km up the trail and you can see the views get good very quickly. 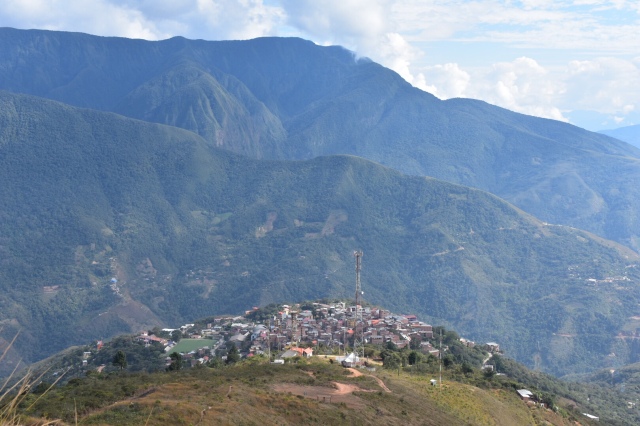 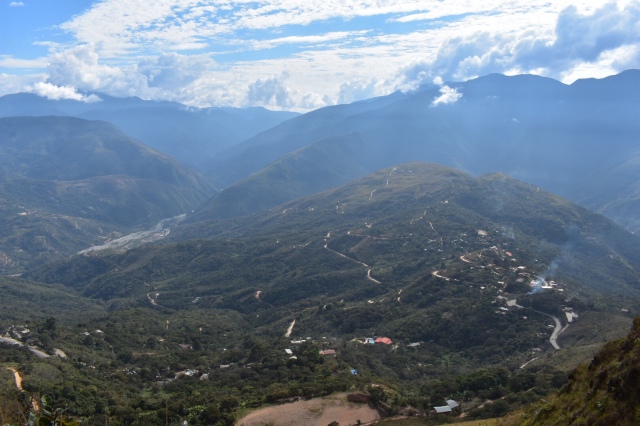 The path turned from grassland to tall shrubs to jungle and then back again several times before I reached the top. I did worry a little in the jungle as I wasn’t sure if I’d be dumb enough to tread on a snake or get bitten by a spider but I decided to leave that to fate and carried on. Although the path is well trodden I didn’t see another soul on the path and it did occur to me that no one knew where I was. Still it was fairly easy and not along any cliff tops as most of the paths I travel. Soon I saw a sign for the top but it turned out to be a false summit and there was more to climb. 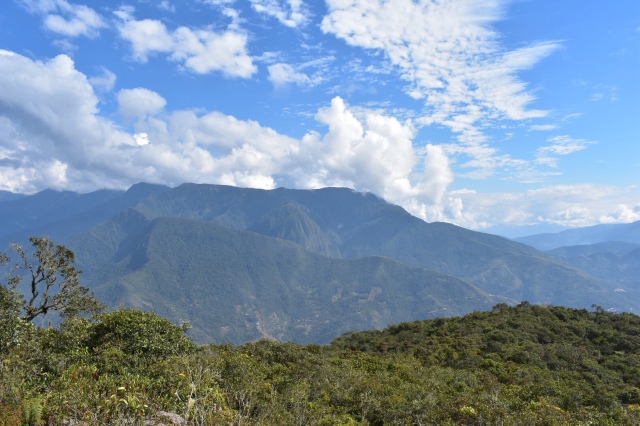 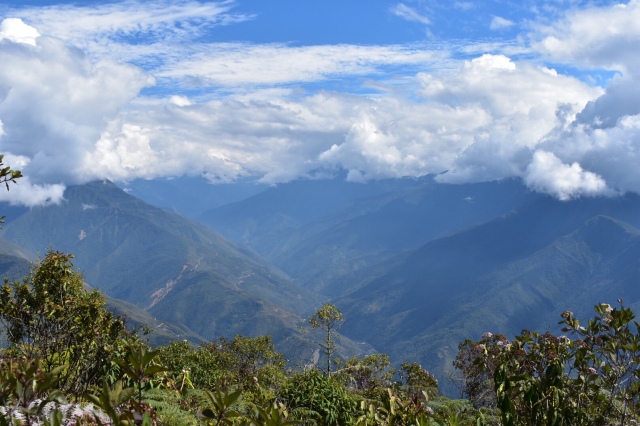 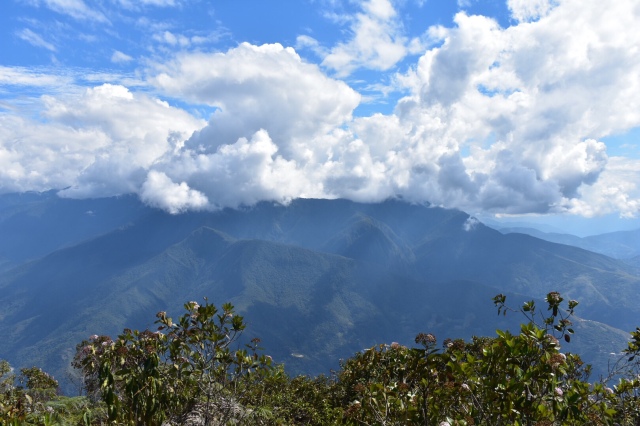 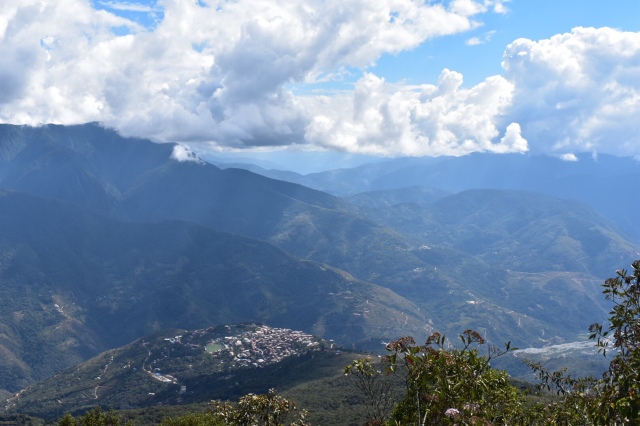 Nearer the top I saw the bushes rustling and they stopped as the animal spotted me. I was a little afraid for a time as the guide had told me there were Pumas in the hills but if it had been a puma it would have attacked already. Also by this point there was only about a kilometre to go. However I really should learn that when walking up a mountain the last kilometre is the hardest and steepest. Still I battled to the top and took a well earned rest.

On the way back down I took my time and took some more interesting photos along with spotting another bird that flew close overhead. 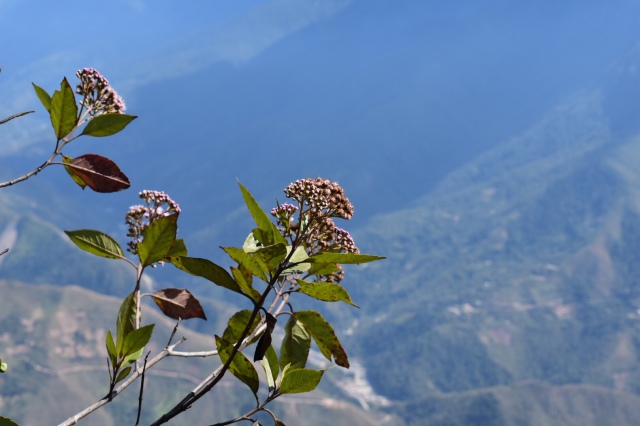 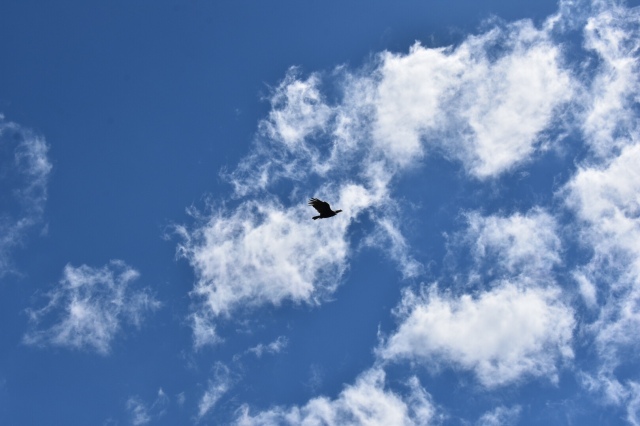 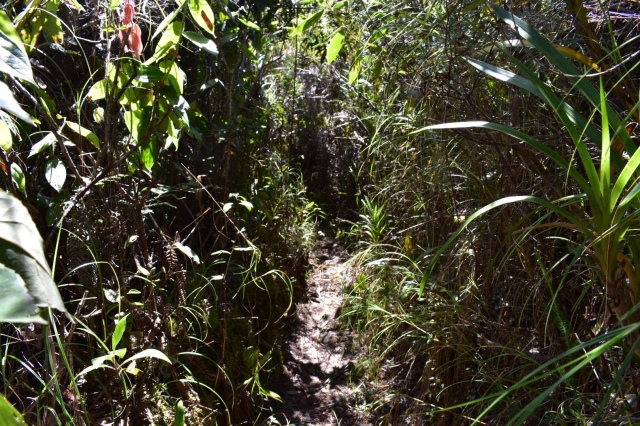 I also saw a grasshopper who jumped out of my way.

I arrived back in town exhausted but in desperate need of some ice cream. I walked around town and unlike everywhere else I’ve been so far in South America there was no ice cream shop. The guide book pointed me to a restaurant that was a little walk away so I decided to hike a little further and headed towards it. My route took me down the sketchiest stairs which seemed to be part of several people houses and annoyingly after all the effort the restaurant was closed. I took a different route back to town and found some ice cream in Carla’s Pub. But the detour did allow me to take some interesting photos of the town.

Afterwards I headed back to the hostel and decided to relax before heading out for some more food. I had been told that there was food fried chicken to be had near the plaza and not one to say no to fried chicken I headed over. The booths that I had seen closed earlier were open and busy. I decided to break my own rule of eating out and sat at an empty booth ordering a plate. I was soon joined by some dogs, one who put his head on my lap whist I was eating but I didn’t share. With no other entertainment and no one to speak to in the hostel I decided to have an early night and leave early in the morning.

In hindsight I’m glad I did as the journey to La Paz took longer than I thought. This time it was a three hour ride by minibus. This followed the new road back to La Paz which had replaced Death Road and I was keen to see it. Despite having opened in 2006 the road was bumpy and had a tonne of potholes. I realised how hard it must be to keep the road open with the extreme weather conditions and it must be difficult to repair as it weaves its way up to 4600 metres up the side of mountains. Still I was glad it existed. I also timed it well to see the Death Road riders starting off and had a view of the valley.

I arrived in La Paz, jumped on another mini bus to my hostel and then to Colribi Camping where I was created by Emma, Belle and David and invited to lunch which was a really nice thing to happen. I stayed for a while and chatted before heading back to the hostel, out again to the bus station to by a ticket to Cochabamba and then had an hours rest before I met up with Amanda and her cousins from the US and we had burgers at Vicios, which I was told were the best burgers in La Paz. They were really good. After I went to sleep ready to say goodbye to the city for nearly the last time.