Patty and I headed back to Santiago via San Antono, where we killed a couple of hours in the mall. I had decided I wanted to buy a laptop as I’m starting to think it would be a good idea to earn some cash whilst I’m here. I rejected that idea when I saw the price of laptops. Also finding shorts here is just as hard as finding them in London in the winter. It makes sense! The third thing on my list was a charger for my head lamp. It uses a weird plug and ideally I need one of these. If anyone has any ideas where I can get one in South America it would be super handy as despite searching in Santiago I still don’t have one to replace the broken wire. Anyways…

Camilo was nice enough to let me crash at his apartment again and greeted us with Completos. Apparently Chileans are mad for hotdogs, someone will correct me on this, and I had not tried any yet. With massive lashings of every sauce, tomatoes, onions, cheese and avocado (apparently they are called Italianos if you have them with avocado). It was delicious and I had more than everyone else.

The next day was a little slow and I wanted to get myself equipped in Santiago before I headed north, as in my head it was a barren wasteland with very few shops, you should have seen my face when I saw the size of the malls in La Serena. But this is jumping ahead. In Santiago I needed to get a haircut, supplies, shorts and the wire mentioned above. The haircut went smoothly, the shorts were a challenge but I found some and the wire was a failure.

So Camilo and I ate some Thai food for lunch and then accidentally brought too much frozen yoghurt. It was help yourself to everything and the tubs were sized big or bigger. I took big and filled it up not really thinking or realising that it’s charged by weight. So I ate half a kilo of ice cream to myself.

That evening the three of us headed out for some Indian food. I had been told there was a good restaurant and wanted to try. After we went for some goodbye drinks before getting up stupidly early in the morning for the bus to La Serena. Camilo and Patty came with to say goodbye which was really sweet and I didn’t know what to do as it’s the first time anyone has come to see me off since I had a last minute encounter with Sharon, my Aunty, at Gatwick. I was appropriately awkward and got on the bus to enjoy the scenery during the six hour trip to La Serena.

I arrived, ignored the people trying to get my attention outside the bus terminal and found the local bus to take me to my hostel just outside of town. It was a nice family run hostel and I booked myself on a tour of the Elqui Valley the next day. I also decided that I had been lacking veg in my diet so took a trip to the supermarket and cooked dinner.

When I arrived the weather in La Serena was cold and overcast. I’m starting to realise that when a place is overcast I seem to like it much less. But the Elqui Valley was the opposite. It’s one of the driest places and has the least amount of clouds anywhere on earth which is why it is home to many observatories, including NASA and the EU. They actually share the same hill. It’s also where most of Chile’s Pisco is grown.

So four of us jumped into the car with the hostel owner and headed into the valley where as predicted the weather was beautiful. Our first stop was Molle Town where we sampled traditional pastries. In the shop we visited the customers all write reviews and then staple them to the walls.

We then visited a dam and artificial lake which is used to stockpile water for the Pisco growers. I was desperate for a wee and I think I’ve found the toilet with the best view in Chile.

We walked along the dam a little and sampled the views. 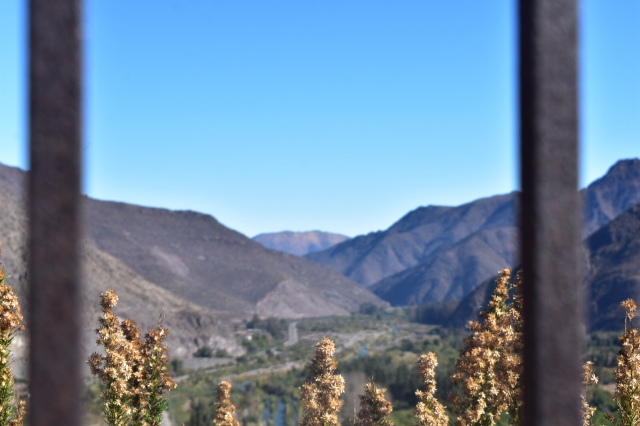 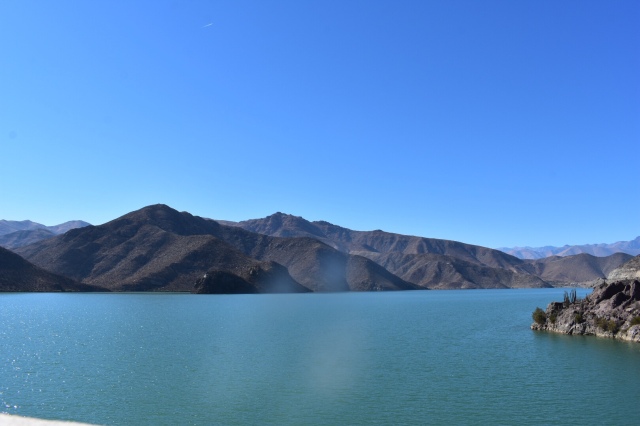 Next on the agenda was Vicuña which is the biggest town in the region. We visited the museum of Gabriela Mistral, who won the Nobel Prize for Literature. She’s a bit of a legend around these pets especially as she helped put education for girls on the map. So check her out on Wikipedia.

After we had a wonder around the town and visited the plaza and church which of course had some dogs chilling outside. 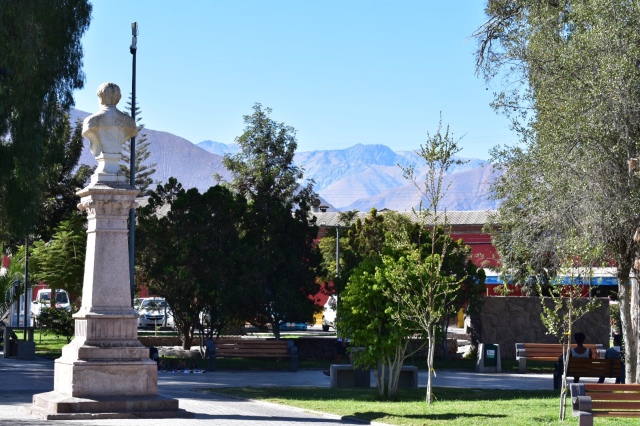 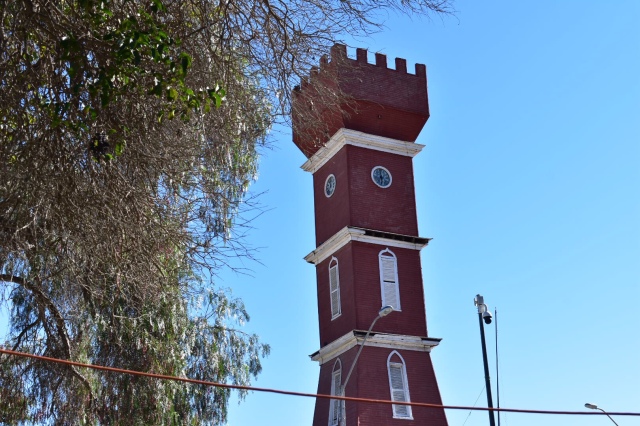 We then had lunch at a traditional Chilean restaurant and sampled a traditional dish of which I can’t remember the name, but it was delicious.

Next up was the big show and we visited the Aba Pisco distillery. Pisco is a big deal in Chile, where they disagree with Peru as to who invented the drink. You have probably heard of a Pisco Sour but you can drink Pisco with anything, coke, sprite etc. They basically treat it as vodka and it’s great. So we had a little tour. 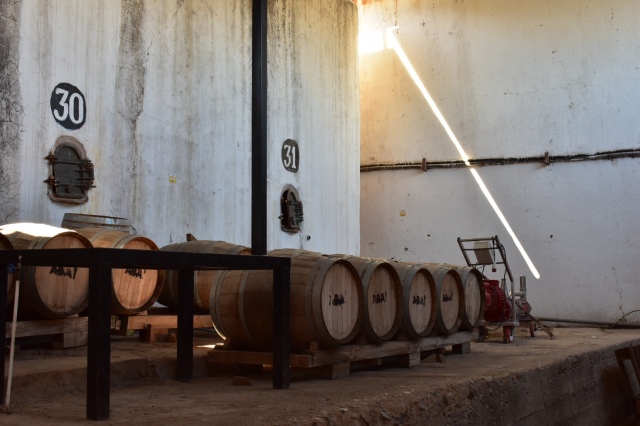 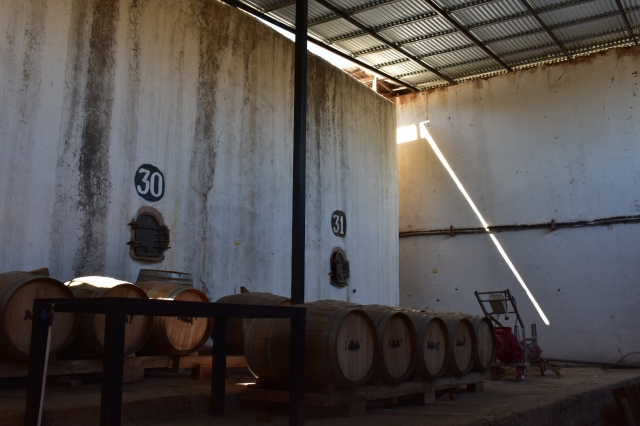 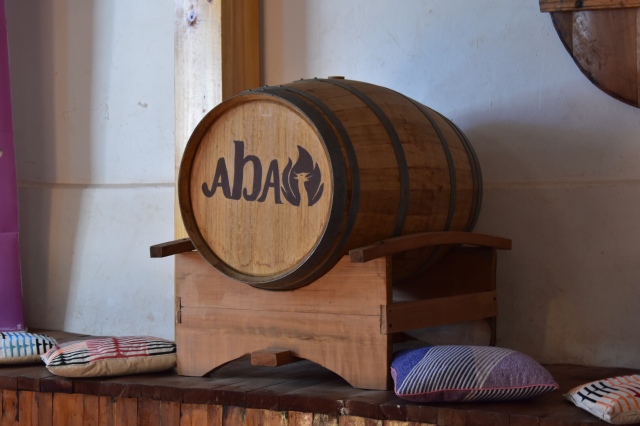 And then we got to sample some of the Pisco. Sadly for me the shots were a little strong and it brought back memories of the day after my birthday so I didn’t try much but everyone assured me it was good.

We then drove to Montegrande which is where Gabriela was born. 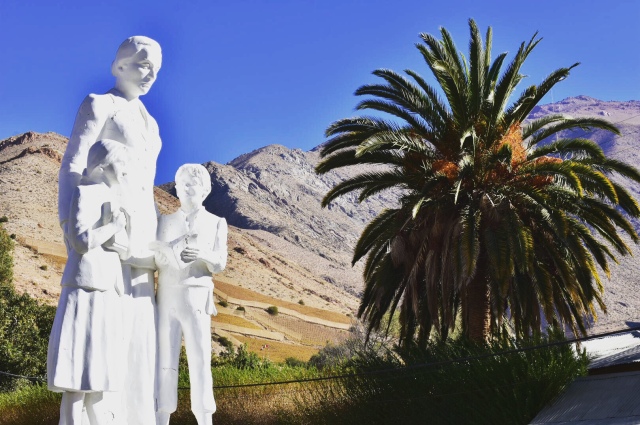 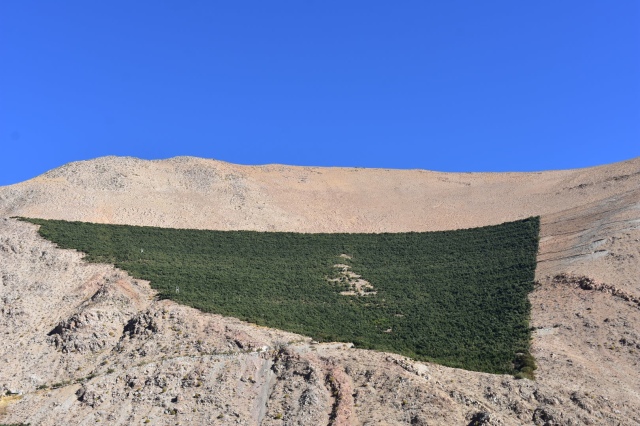 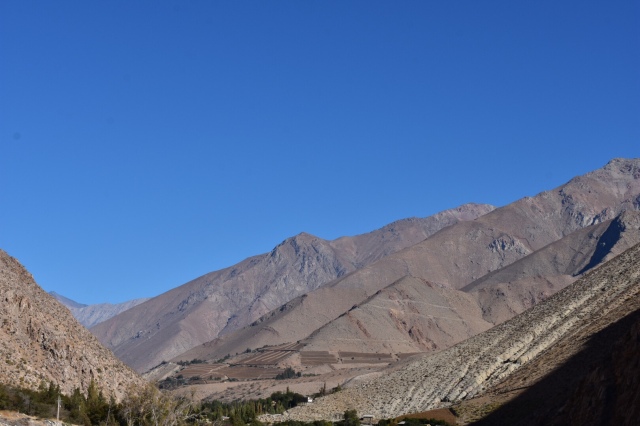 Before driving to Pisco Elqui a town full of hippies. 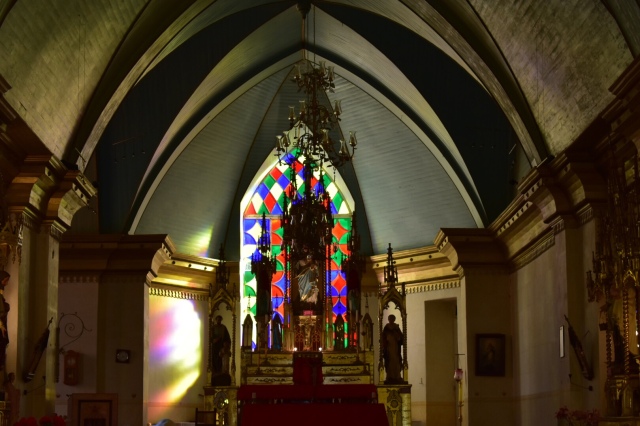 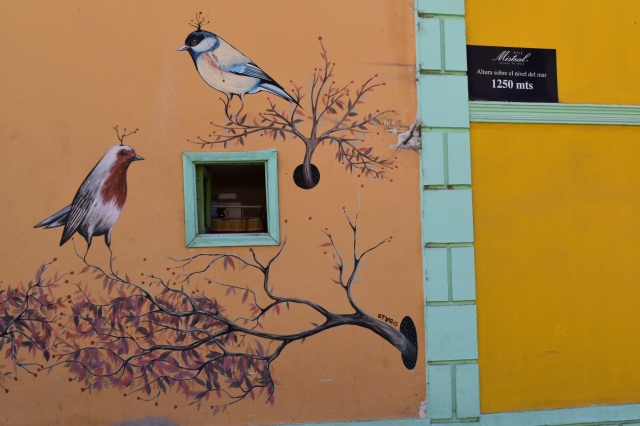 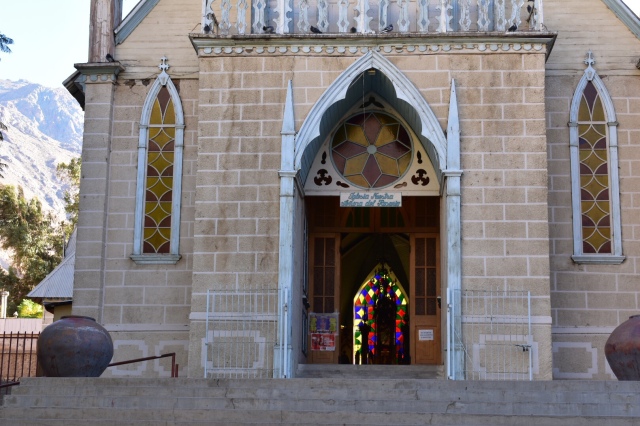 Whist there I had more icecream. Note that mint and toffee don’t really mix. 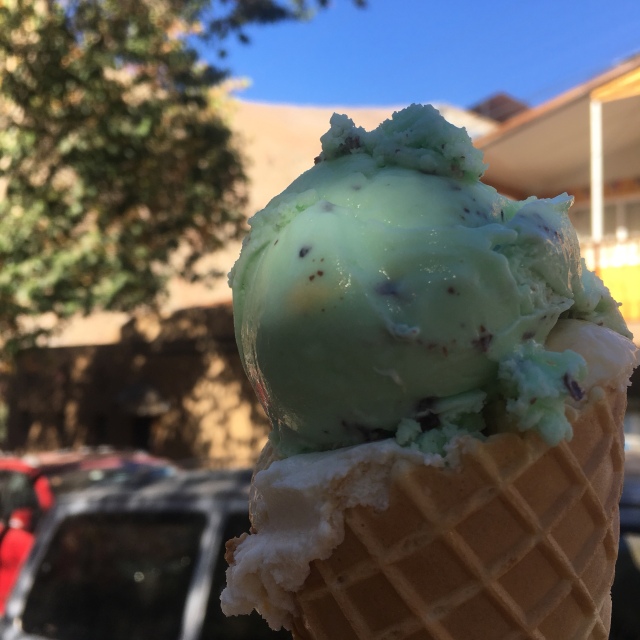 And then we headed back to the hostel. On the journey I took a lot of photos from the car as I loved the colours of the sunset on the mountains and water. 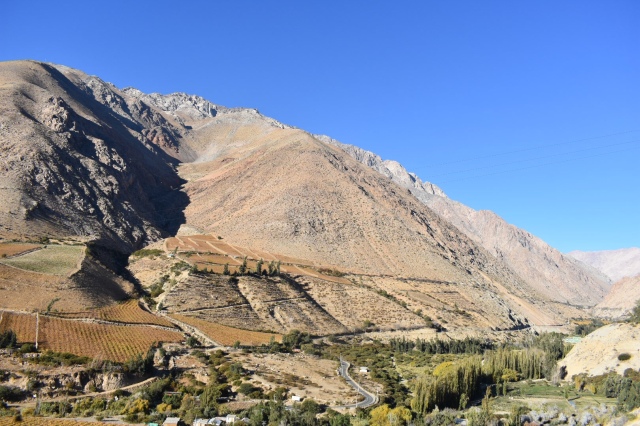 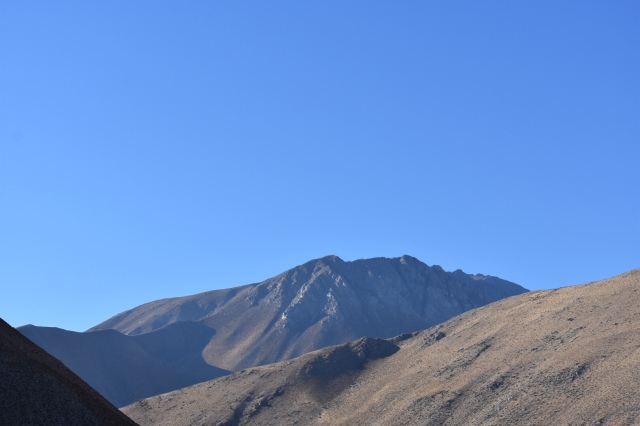 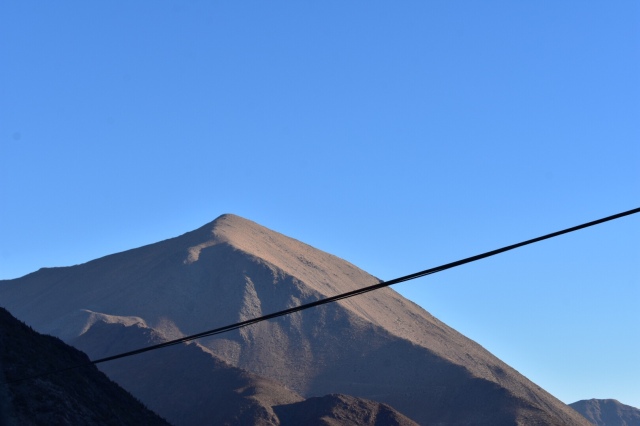 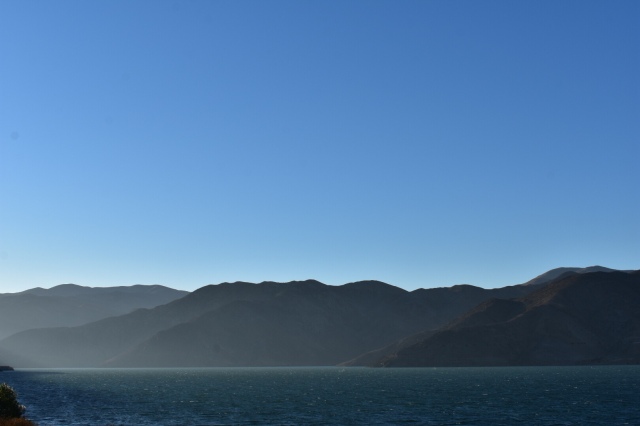 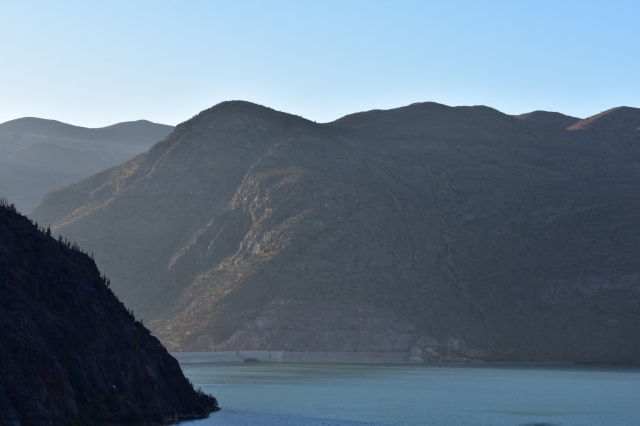 The next day I was pretty grumpy as I had been told that there was no hiking in the Elqui Valley, this was completely wrong so if you do want to hike go there, and I was desperate to hike. I decided not to spend a night in the valley as I felt I had seen everything the day before. It also seemed that I would have to miss the Parque National Nevado Tres Cruses as no tours were going and I was the only one interested. It’s apparently off the beaten track, no idea why as it looks amazing, and it’s not the season. I didn’t want to go as there were only hotels and with no guarantee of a tour I didn’t want to waste money. A little defeated I booked a bus ticket to San Pedro which was overnight, again not to my liking and as I was exhausted I thought I should take a rest day but again felt I was wasting time.

I headed into La Serena with a plan to see the sites and do some research. It was freezing and grey so I skipped the sites, found a cafe, and then found Lemongrass Thai gem for lunch. It’s delicious and you should go if you can. Cheap and lots of food.

I then retreated to the hostel after visiting the biggest supermarket I’ve ever seen and had a Netflix afternoon.

The next day I decided to sample some seafood. Typically the sky had cleared and it was warm but I had a delicious lunch before catching the night bus to San Pedro.

And here is La Serena in the sun. 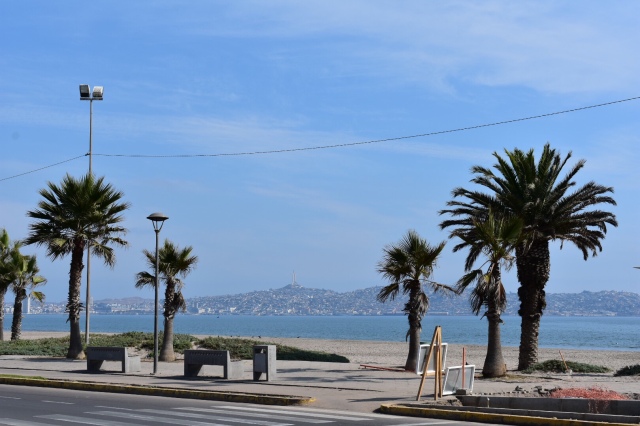