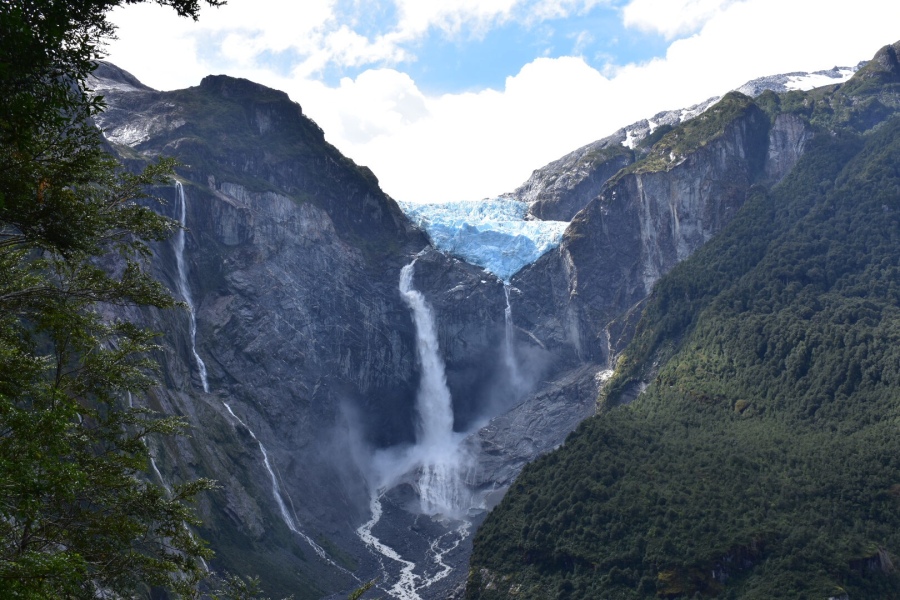 My next stop was Coyhaique on the Carretera Austral, built in the lasts 80s by Pinochet it’s the only road that connects this region with the rest of Chile. Previous to this they were only accessible by boat or via Argentina. I’ve read a lot about this area and essentially what you keep reading is that there is very little information. This made it exciting and scary but I really started to feel that I was getting into Patagonia.

The wind hit again during landing at Balmaceda airport, 50km to the south. It was grey and raining and desolate. I hopped in a transit van and was on my way to Coyhaique. Initially I was a little disappointed with the landscape. It was open, green, grey and grassy. Imagine a summer day in South Wales. But as we progressed to Coyhaique it began to change for the better. 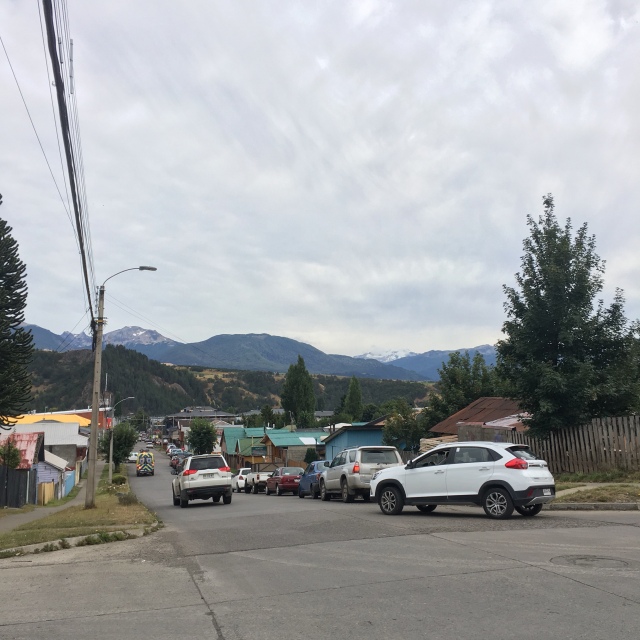 There is not much to do in town but I had much admin to complete. Coyhaique is the largest town around, with a supermarket and other facilities. I needed to book a bus for my next destination, one I hadn’t yet decided upon, sort out my camping gear and a whole heap of travelling admin-if you have not travelled you won’t believe the amount of admin you have to do. Typically my back pain kicked in, in a big way and the hostel didn’t know the bus times. They pointed me to tourist information who did know, and I soon had a ticket and a return ticket-you won’t believe how difficult I found ordering that-to Parque National Queulat.

That evening I set out to find Casa Tropera, which didn’t seem to have a Google presence, and ended up walking around town for around an hour until I hit some dark roads I know Gary would tell me I was a fool for walking down. So I headed back to a steak restaurant and had my first taste of Patagonia lamb.

At time of writing there is one bus a day which goes to the town of Puyuhuapi, 20k north of the park. It leaves Coyhaique at 2pm and returns from the park at 7am.

I was still fairly unsure about heading out into the middle of nowhere and asked a guy (I do know but I can’t spell his name) if it was the right bus. Confidentially he was going to the same place so I had someone to stop the bus for me also. He sat in front of me with Praticia (again apologies if I’ve spelt this wrong) and she gave me a fright when she put her seat back.

As we leafy town I started to see mountains, rivers, trees, waterfalls, rocks and beautiful scenery which was soon surrounded in clouds, mist and rain. The Patagonia weather hit hard as we drove north. After about 3 hours the road turned to gravel and I kept thinking the bus would tip over when it went around the corners. It didn’t. Everything was fine. Well except the boy who sat next to me who was sick into a bag three times.

We got there and there was a brief reprieve in the rain, luckily, whist the park ranger explained the camp sites. I opted to walk the 2k from the road to hot showers, that I wouldn’t end up using, and made friends with Praticia along the way. They ended up saving me by helping to put up my tent as the rain started in earnest. We sheltered in the cooking area and spent the night giving me beer, food and swapping music tips.

Above is where the tent was-i forgot to take a picture.

I ended up going to bed late and could not get warm. In the morning I discovered I was not the only one and in hiendsight it was the wind coming from the glacier. 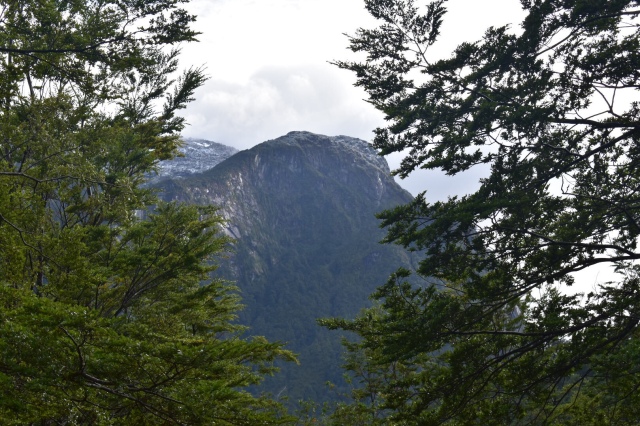 It was time to start the treck which is only 3km but when you are walking up a steep hill in the Forrest it feels more like 10km. First we had to cross the bridge with the glacier melt water. 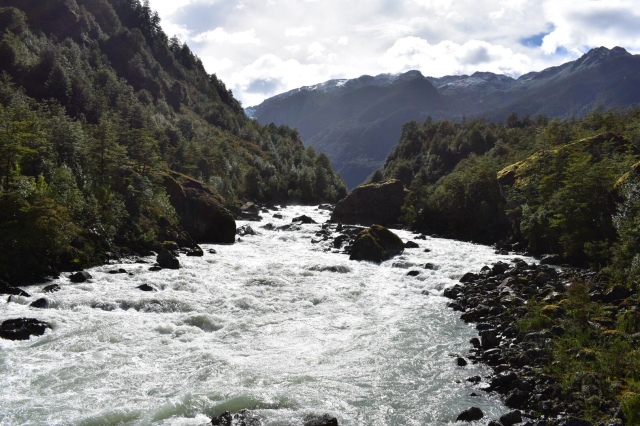 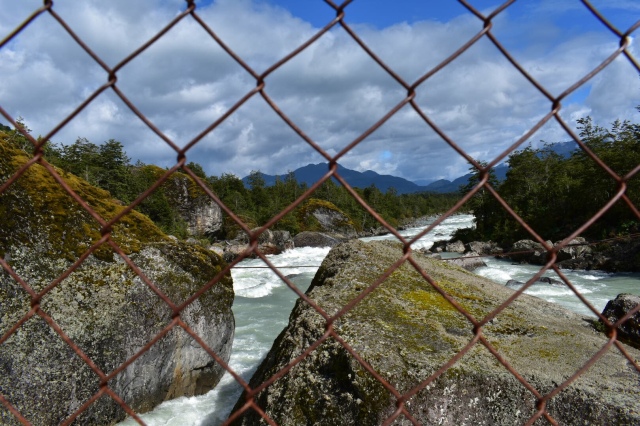 And then follow the Forrest path, which is really muddy so think about shoes if you come here. 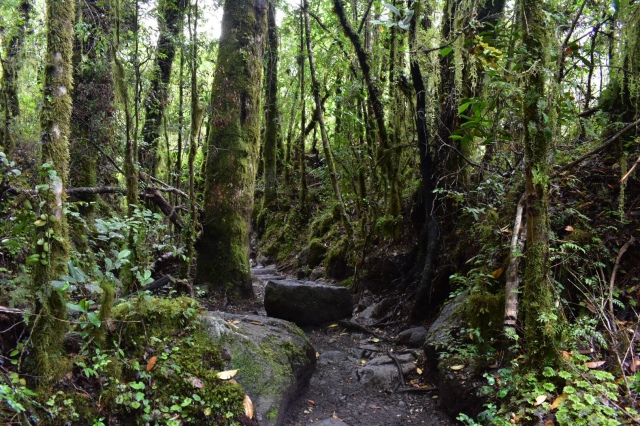 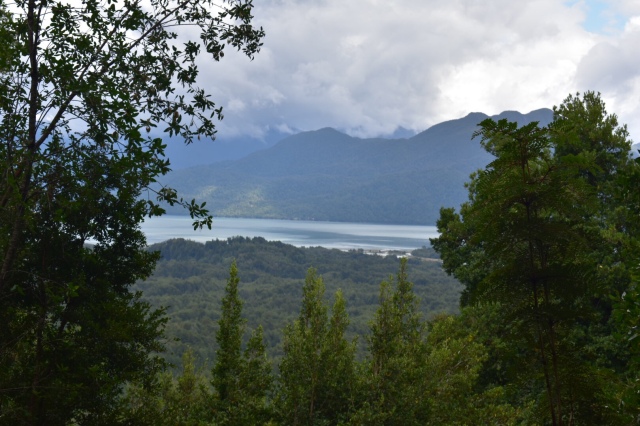 But when you get to the top you are rewarded with this view. 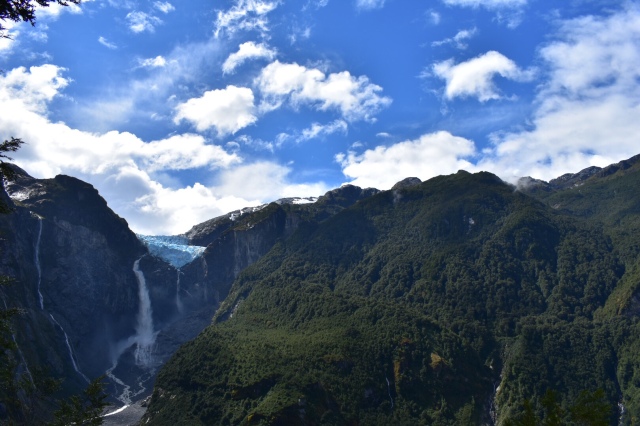 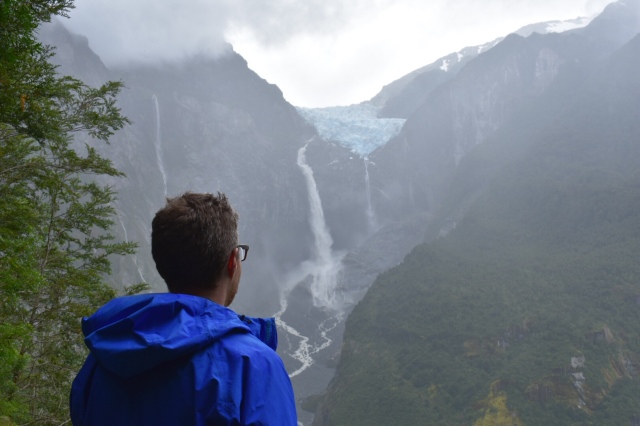 Again there is no way the camera can really capture the sound and the wind but here is my first glacier.

When I first arrived it was hardly visible but after 10mins started to clear. Some people never get to see it so the weather is still on my side! We also walked around to get a different view from the lake. 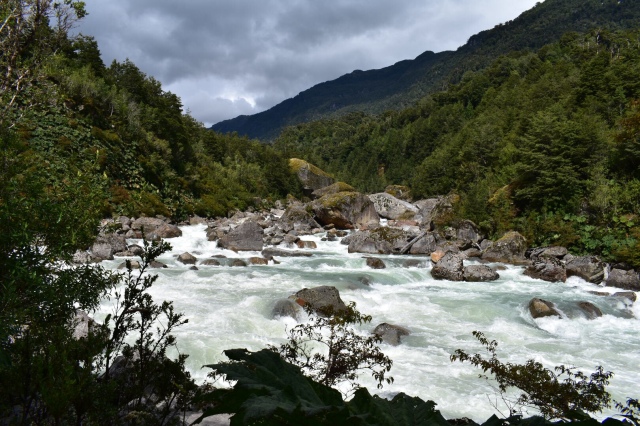 My new Chilean friends all decided to hitch to the next destination and I was left alone again. I opted to camp near the road and this campsite was not as pleasant, compounded with a man walking around with an axe. For the moment I was completely alone with little option but more people showed up and waved. The man was a park ranger. I was also treated to this view of the rain.

The bus arrived at 7am the next day but to be sure to catch it I was up at 5:30 packing up my things in the dark and rain. I found myself in full waterproofs, comply relaxed sitting in the side of the Carretera Austral at 6:30 in the morning. For the first time I didn’t worry if the bus was going to show up or not. Soon I heard a noise, then saw light, then a lot more light and the bus stopped right in front of me. I was rewarded with the seat next to the diver giving me the best view of the 4 hour journey back. 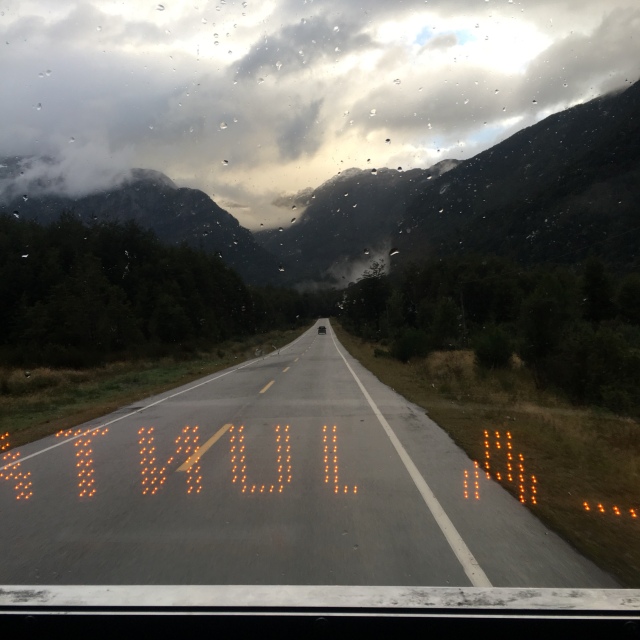 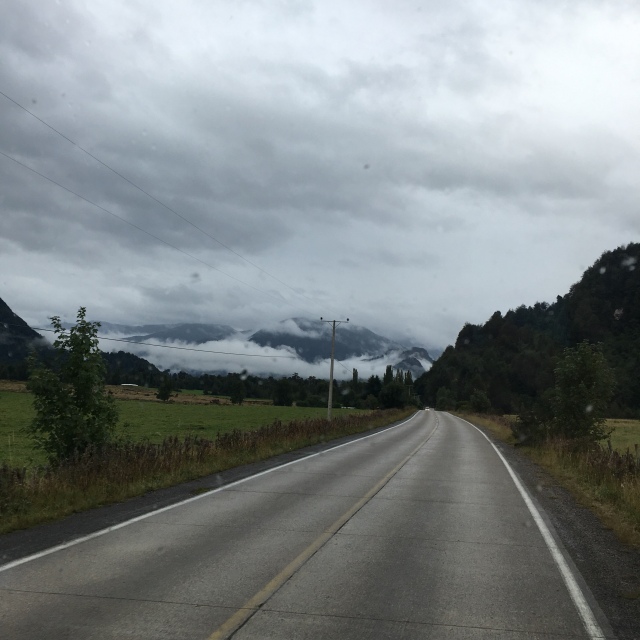 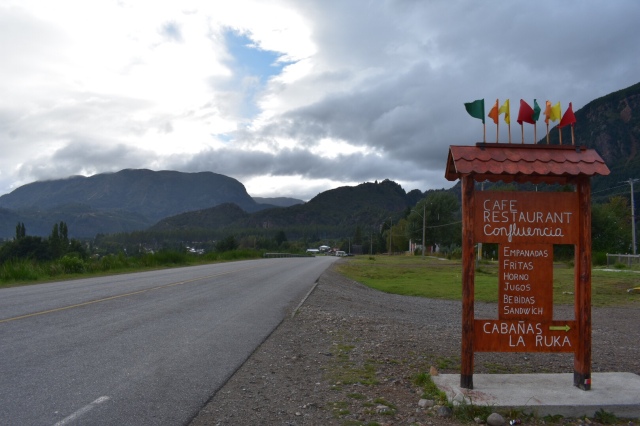 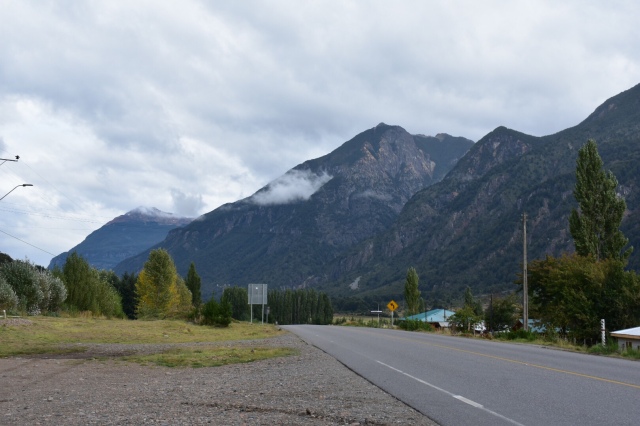 I went to the same hostel and after another day of admin treated myself to Casa Tropera…and you should too. It’s great. And you get to cross this fun bridge. 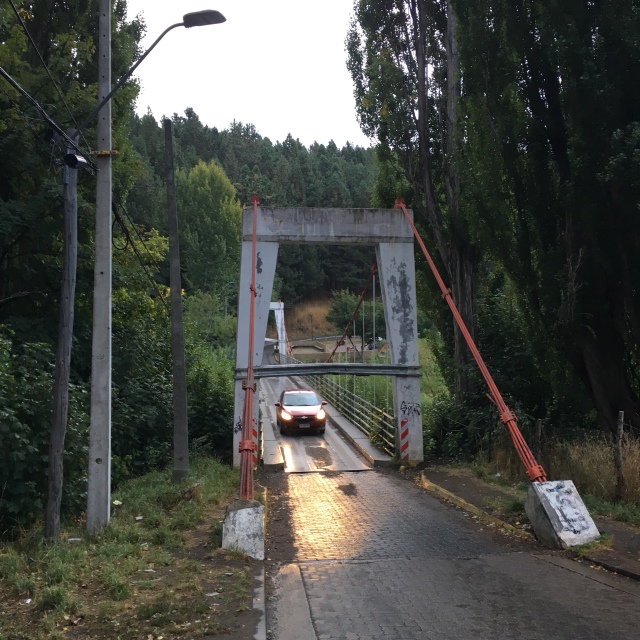 One thought on “Coyhaique and Parque National Queulat”