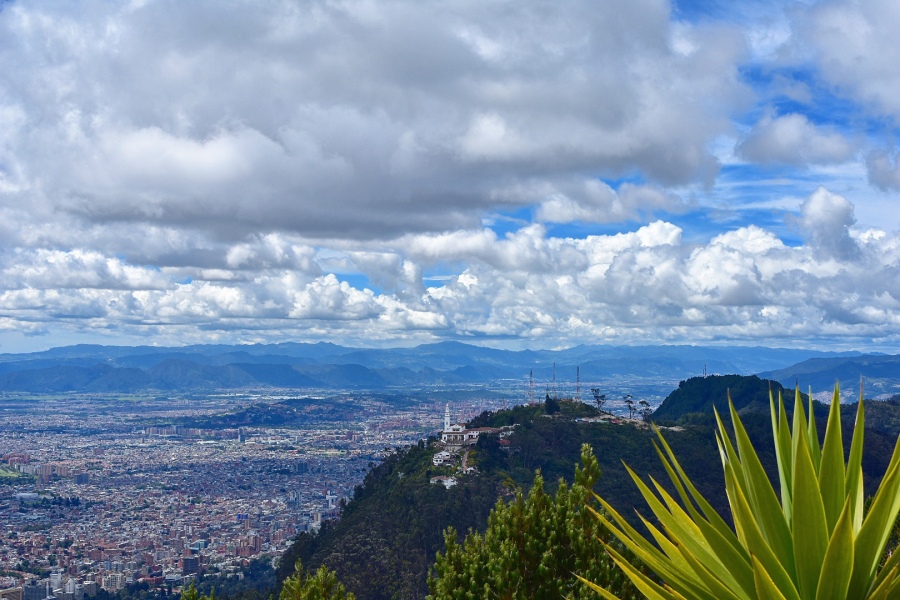 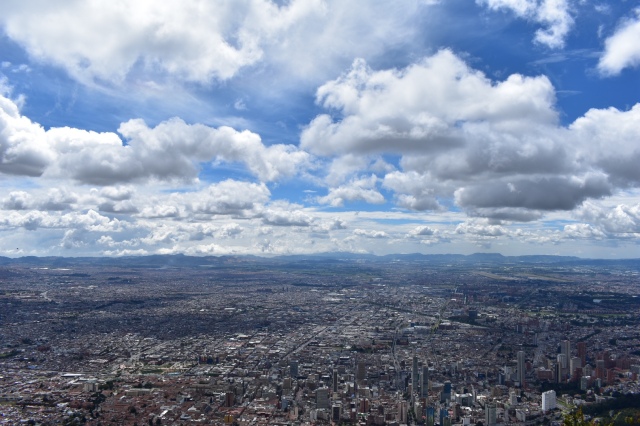 The stunning Cerró de Guadalupe stands out in Bogotà’s skyline where the statue of the Virgin of Guadalupe, built by sculptor Gustavo Arcila Uribe in 1946 and the accompanying chapel are visible from vantage points across the city. Situated in the eastern hills across from Cerró de Monserrate, Bogotá’s premier tourist attraction, which also offers great views of the statue. Cerró de Guadalupe is much less popular, but arguably the more beautiful cousin, and is well worth a trip. The views of the Bogotà Savannah are  stunning, with a better angle to see more of the city and being less popular means that you can have the peak to yourself and enjoy a tranquil respite from the metropolis.

The trip is a little more challenging than Monserrate. Public transport all the way to the top is only available on Sundays, which I recommend you avoid as then it will be packed with church goers. You can get a flavour how busy the route becomes on Sunday’s by reading the Parque Ecológial Matarredonda post, as we took a bus that passed the entrance. The entrance is a short bus ride form Calle 6 and then a 2km walk to the top, which is a long a road so its not as steep as it sounds. If you visit on a weekday you might not see another soul.

There are many stunning hikes up to the Cerros surrounding Bogota which start in the city itself. Read my post about hiking to Mirador Aguadora from Usaquen, which can be combined with a slightly longer Camino del Indio with Emblase San Rafel as a backdrop. Alternatively you can choose from 4 different hikes that from part of Quebrada la Vija, including one that takes you up to the closest Palmero direct from Chapinero. 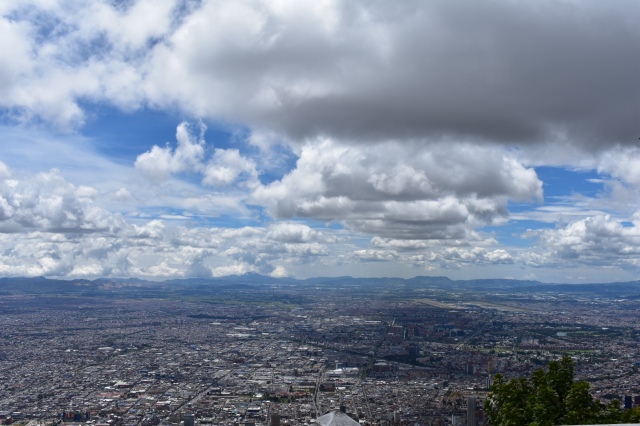 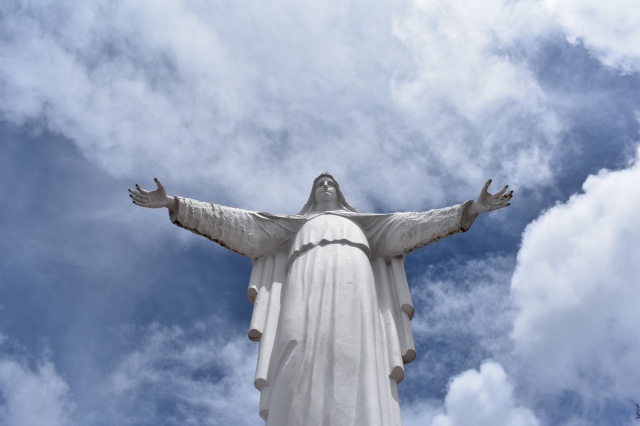 I had located Cerró de Guadalupe on the map when we were returning from the El Chorro Waterfall hike, not really realising what it was at the time. We had driven past the access road on the way to the waterfall and I pulled out my map to see where the rad led. After popping in the pin in the map and some research I realised that it was the same mountain as the statue so this hike was added to the growing list. One Friday we decided to hike up to the Mirador Aguadora from Usaquen but when we arrived we were told by security that the path was closed for maintenance. Not really wanting to give up as we were ready for a hike Angela suggested we attempted this climb instead. So we jumped on a long bus ride across the city and instead headed up to Cerro de Guadalupe.

The bus leaves from Calle 6 south of downtown so we headed to Tercer Mileno, Carrera 14 and Calle 6, right next to Parque Tercer Milenio. From there head out the south entrance to the main bus terminal on calle 6. I would recommend taking an Uber or a Taxi as the area os not the safest, although you will be fine between the Transmilenio and Bus Terminal. From the terminal you need to get on the bus to Choachi but tell them you want to get off at Cerró de Guadalupe, which is about half an hour into the journey. It’s around $4000 each way and you will get dropped off by the driver on the side of the main road on the access road that leads to the top of the mountain.As soon as you are off the bus you will be able to breath in the pine smelling fresh air.

From here just follow the road until the top and you can’t get lost as there are no turn offs. We began the walk already surrounded by the trees that cover the eastern hills of Bogotà. The whole 2km hike is uphill, with several respites, and we set off at a nice easy pace as we knew the hike was pretty short. You will be walking along a road, with cars, although you can hear them from a distance and there are no parts where they can not easily pass you. We didn’t see any other hikers but on this Friday afternoon we did meet some workmen fixing the road. Well they had stopped for lunch at the time.

It was nice and quiet and when you do reach the top there is a small car park and some tourist shops and restaurants. Most were closed and we bypassed those that were open. Although you are not far from the city I’d make sure you bring food and water. After all its the perfect place to stop and enjoy lunch.

When you reach the top be prepared for the views to take your breath away. 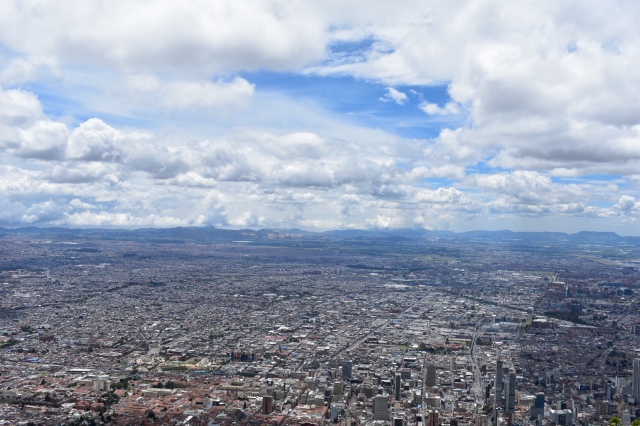 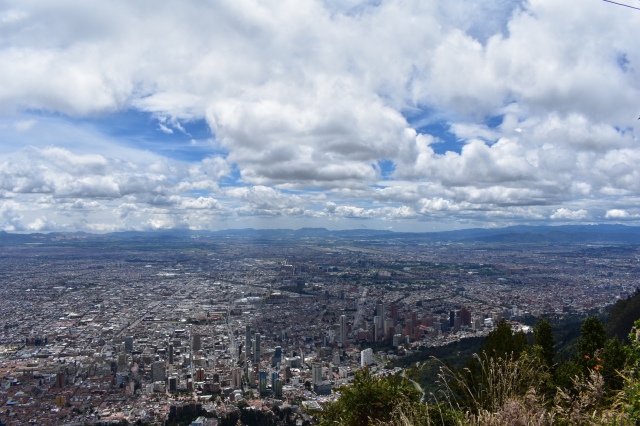 The 50 ft Virgin statue is more impressive close up.

And you can see Cerro de Monseratte opposite, and you can be smug knowing that you can look down on and have a better view of the city than the toruisits on the other cerro. 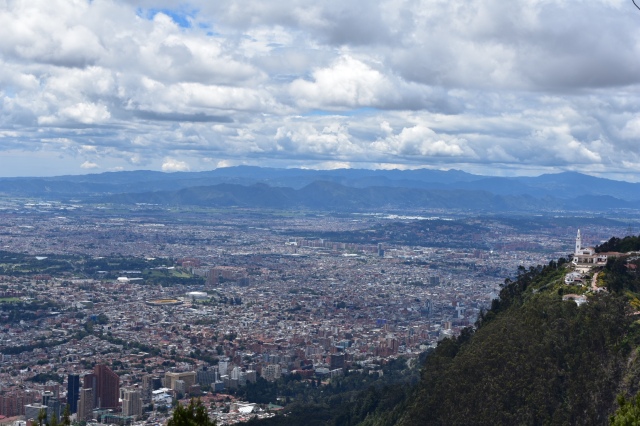 These will be your views while you are at the top. Take you time to enjoy the experience. 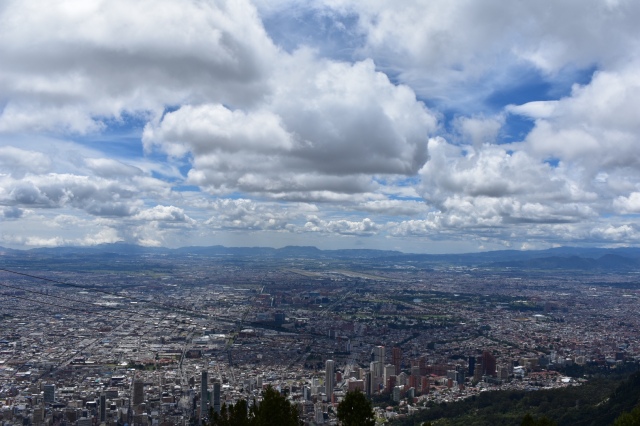 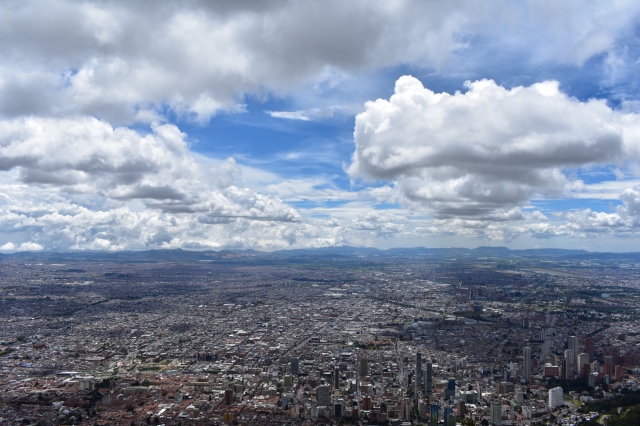 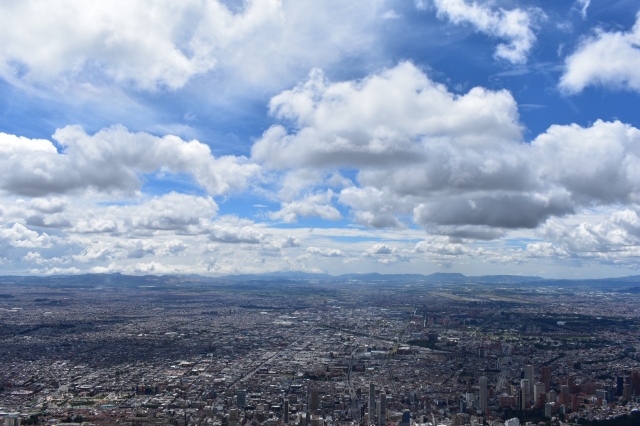 And a quick look at the surrounding mountains. 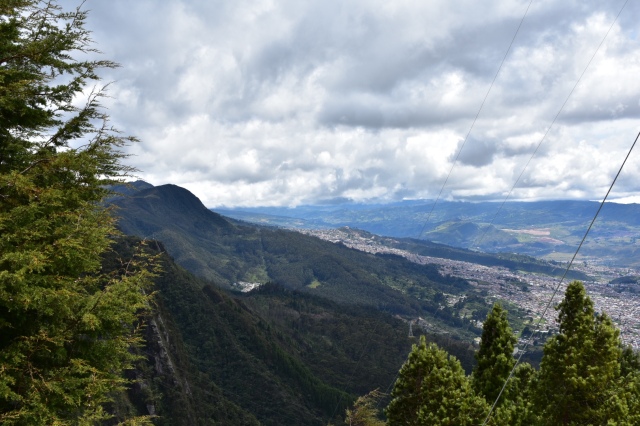 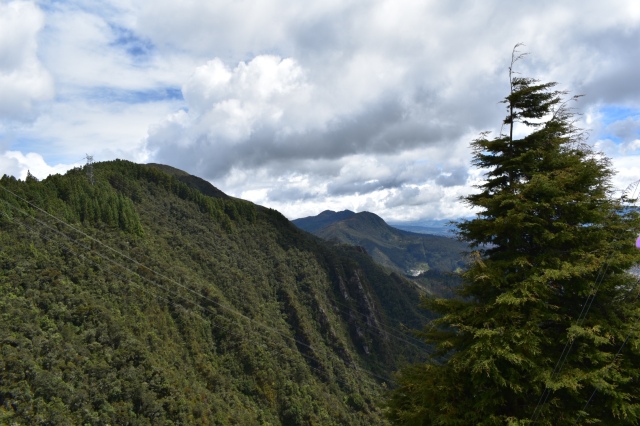 There are not a lot of things to do at the top but its really worth the trip for an afternoon – I would advise you not to come here for the sunset. I’m not sure how late the busses run but as with most of Bogota this area was known for muggings and I’ve read that it is much safer than it was, but always be careful. We didn’t see anything to make us scared. Just be wary of your valuables.

Afterwards it was just a case of retracing our steps back down the road. The 2km passes pretty quickly when you are walking downhill. Cross the main road and flag down one of the busses heading back to Bogota.We were waiting for 15-20 minutes and it shouldn’t take you too long. Again when you arrive at the bus station on Calle 6 either book and Uber or walk directly to the Transmileno station. 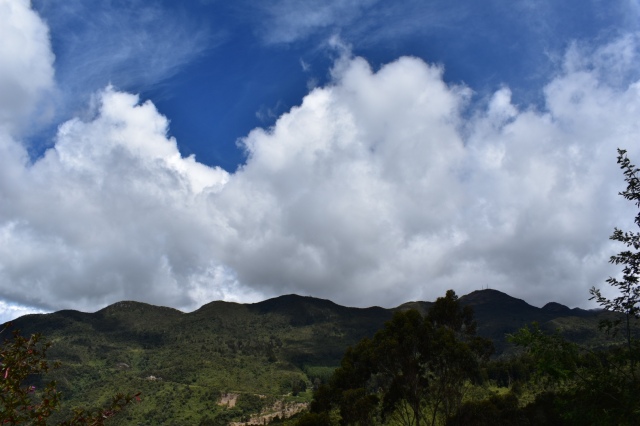 How to arrive at Cerró de Guadalupe

You need to go to the TansMilenio station Tercer Mileno, Carrera 14 and Calle 6, right next to Parque Tercer Milenio. Make sure that you either take and Uber, Taxi or Transmileno. If you take the bus then leave by the south entrance and walk directly to the bus terminal. I’ve been told to keep out of certain areas of the city and this is one. That said the next bus stop you need to reach from the Transmilenio is one block away and there is a police station on the way so it’s safe, just don’t stray.

The Bus station you want to reach is on Calle 6 and on Maps.me (which I really recommend you downloading) it’s marked with two names, La Estaanzuela and Transoroente. To find it, take the south entrance from the station and head to the right, west, away from the mountains. If you don’t find it within one block you have gone too far.

From here you will need to take a bus to Choachi, $4000, and ask to be dropped at the road for Cerró de Guadalupe. Busses are pretty regular and from where you are dropped its a 2km walk to the top. When you are ready walk back down and flag one of the busses heading back to Bogota. 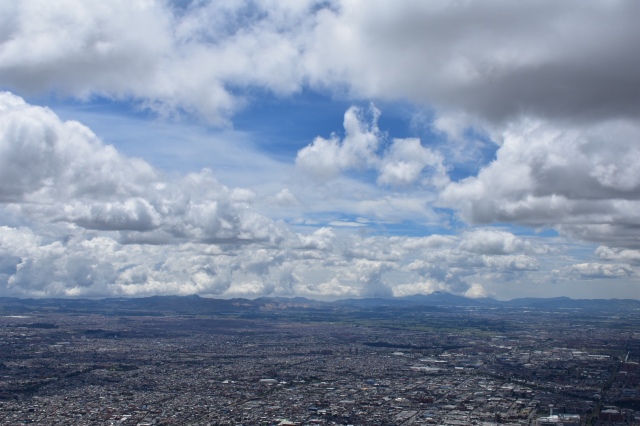 This is a short hike so you don’t need to be overly pre-paired. I always wear hiking gear but its not necessary on this trip. As the hike is in Bogotà take some warm clothing and its best to have waterproofs on hand in the event of rain.

The walk up is more of a walk than a hike, but I’d advise wearing sensible shoes and taking a bottle of water. There are no toilets on the walk and limite places to stock up on supplies, once you leave the bus terminal at Calle 6. Although you are only a short distance from the city I would advise that you bring everything food and dink wise for an afternoon excursion

There are many stunning hikes up to the Cerros surrounding Bogota which start in the city itself. Read my post about hiking to Mirador Aguadora from Usaquen, which can be combined with a slightly longer Camino del Indio with Emblase San Rafel as a backdrop. Alternatively you can choose from 4 different hikes that from part of Quebrada la Vija, including one that takes you up to the closest Palmero direct from Chapinero.

7 thoughts on “Escape the City for an Afternoon and take a Short Hike to Cerró de Guadalupe, Bogotá”