My next planned stop was San Agustin, the village with the unexplained giant heads. Whilst I was heading back south I read about there being giant heads in the country side, sadly which are now unexplained and the history has been lost. Katha asked if she could join me for the trip and of course I had agreed, as afterwards she wanted to go to the desert and also had started to put a plan together for Cano Crystales where we would have to charter a plane with our new friends Debbie, Roberto and Nick (who was still in Italy at this point) but we will come to this in a later blog.

We were told the journey was around 4 hours from Popayan (the busses go all day so you don’t need to worry too much about the time) so decided to catch the 9:45 am bus so we had a little lie in after the early rise the day before. We were soon at the bus stop and on the bus, well mini bus. I had read a lot of blogs about the journey and they had all complained about the bumpy ride. Two hours in I was laughing as although it had been bumpy it was nothing out of the ordinary but pretty much as soon as I said this to Katha the road got bumpy. The fun of this was added by a storm overhead which dumped rain all over the road. Yeah, prepare for a bumpy ride and yes this probably is the worst road I’ve experienced in South America, well ever, and by this point I’d traversed most of the continent and survived Bolivia. It was slow going and by the time we were all ordered off the bus at the military checkpoint I was grateful for the respite. Looking like a gringo I was spared the pat down but they did take a look at my passport but not for long. Soon we were on our way again and now on tarmac but it didn’t last long as we stopped for lunch.

Soon we were back on the bus and the journey was much faster. The bus itself doesn’t go all the way to San Agustin, however don’t worry, as the driver will tell you where to get off and we switched to a 4×4 car to take us the rest of the way. Katha and I had opted for a hostel out of town which was really nice and upon checking in we agreed that we could easily stay here for a week. But alas we didn’t have time and instead opted to stay for two nights. On the way I had gotten talking to Nathalia who works as a local guide and had offered to take us on her bar tour, of all 4 bars in town, on Friday night. It took me a while to establish if this was an organised tour or just her tour. Turns out its not organised and I got the impression we wouldn’t be the first tourists to take this and it helps her practice English so everyone wins. But back to Thursday.

We relaxed in the garden and decided our plan for the next day. There are three was to see the faces, one is a horse riding tour which takes you to four sites, another is a national park that you can walk to from the town and the third is a car tour that takes you to some of the more remote sites. Having spent my life practically in moving vehicles all day for the past 10 months I decided that that another day in a car wasn’t for me, so we opted for the horse tour which was recommended by everyone else at the hostel. So we opted for it and paid 50000 pesos.

That night we headed into town and went to a recommended restaurant. I have no idea what it is called now but we were offered a limited menu and I devoured the steak. 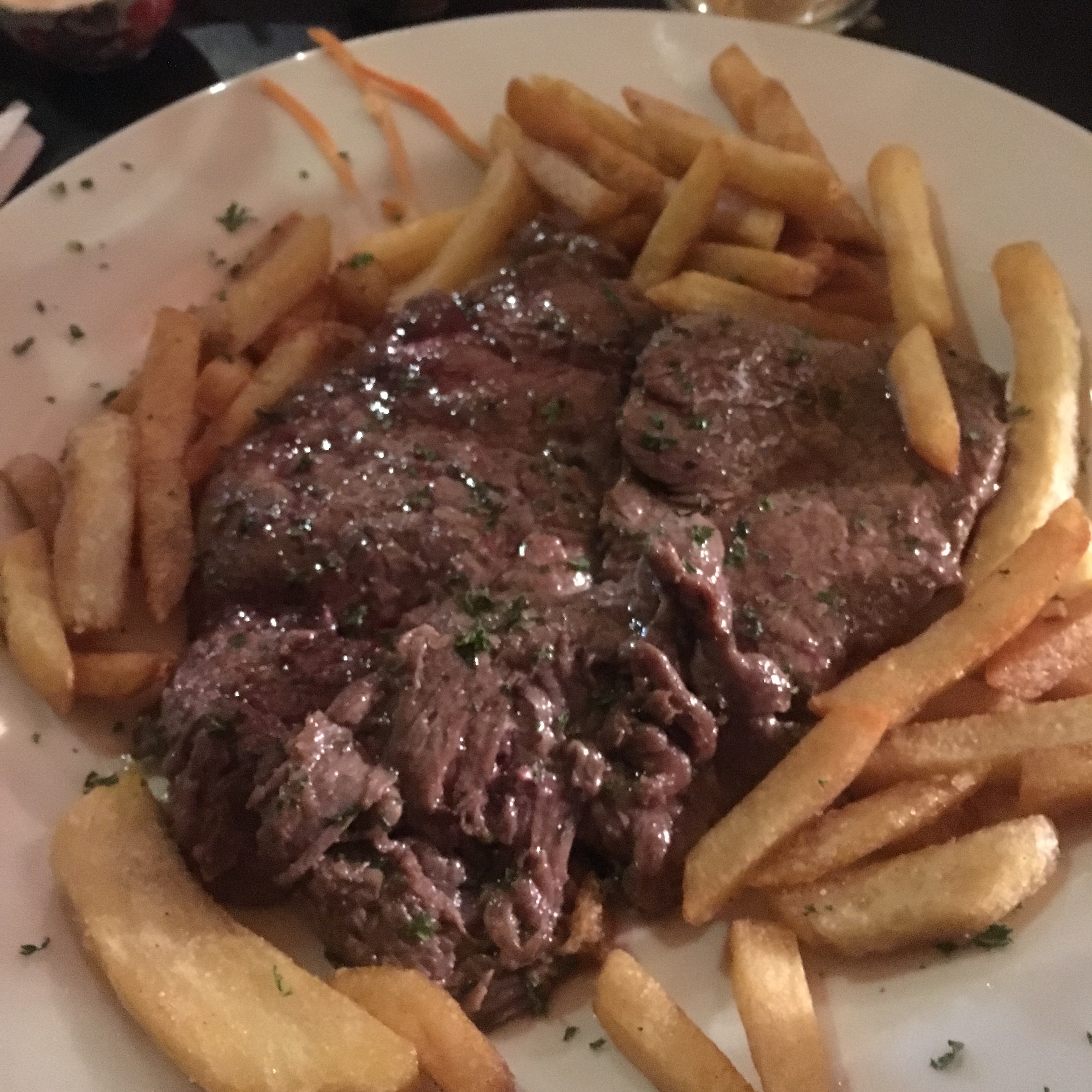 After we headed to bed to be ready for the horse adventure in the morning. Breakfast was pretty decent and I had eggs yet again and soon we were picked up from the hostel. There were 5 of us in total from the hostel and 9 in total in the whole group. A fair few of the guys had never ridden a horse before and I have some experience having ridden a little as a child and I last rode in Namibia last May, so I was given a harder to ride horse. I soon found out what they meant as the horses started walking off at a slow pace. It was all fine until another horse tried to overtake mine and there was a race for the front. Initially my horse was desperate to be first and I soon found out that there was little I could do. He (at least I think it was as I never looked to check) pulled out in front and ran anywhere he could. The first set of faces was at least a 20 minute ride away and most of it was on the road. The horses didn’t go any faster really than a fast walk at this stage and but I was a little nervous when we hit the gravel road and started going down hill. Luckily I was given a helmet but I still didn’t fancy falling off and going down hill made it feel that I was a long way off the ground. It was pretty overcast but the weather was really hot and I’d decided to wear my camera, I decided that I wouldn’t do this for the next part of the journey.

When we disembarked from the horses we met with another riding group and went to visit the first set of faces. I have really no idea what the history was as it was all in Spanish. I know but meh, go yourself if you really want to find out. I was busy taking photos, trying to understand any Spanish that I could and recovering from the ride. 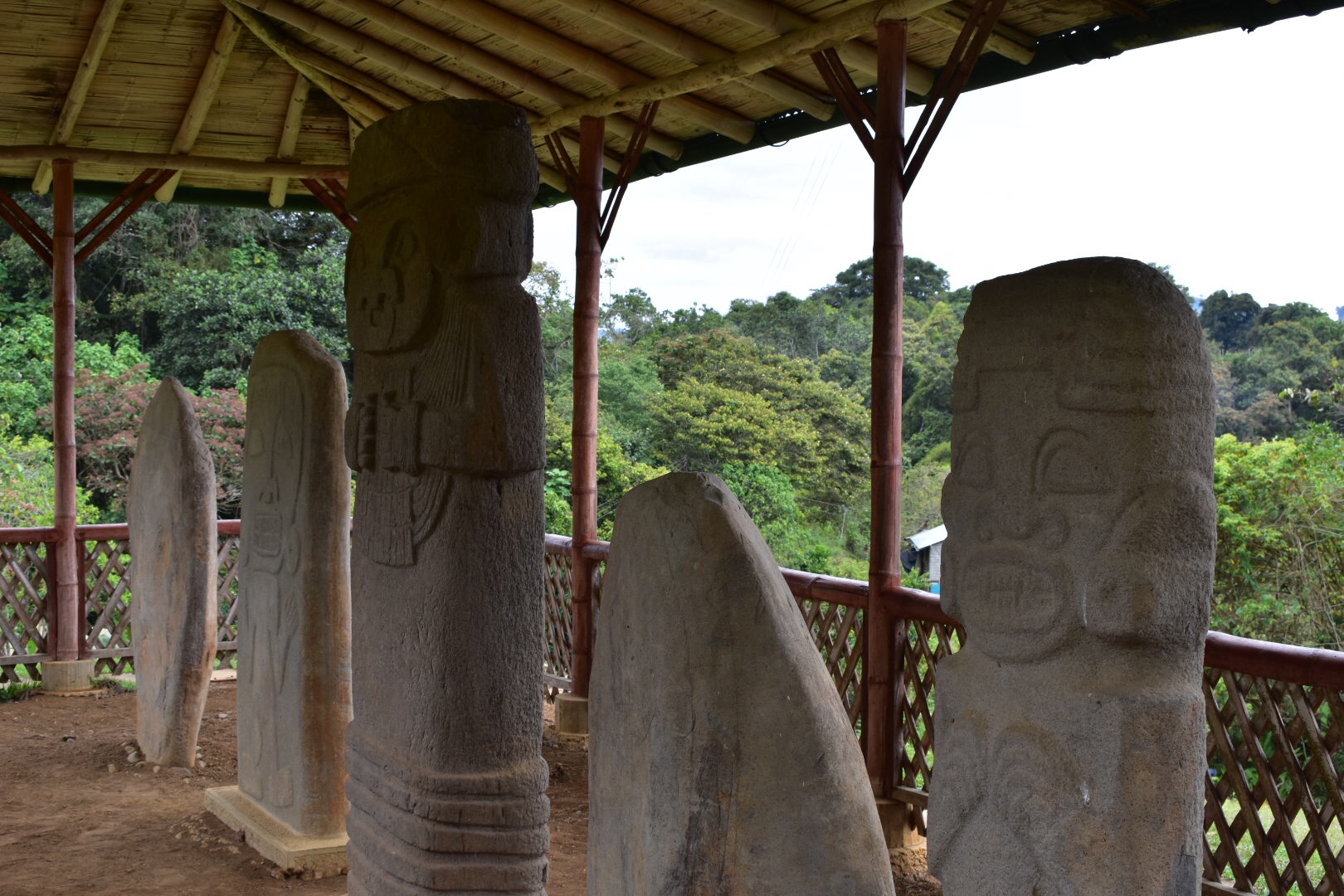 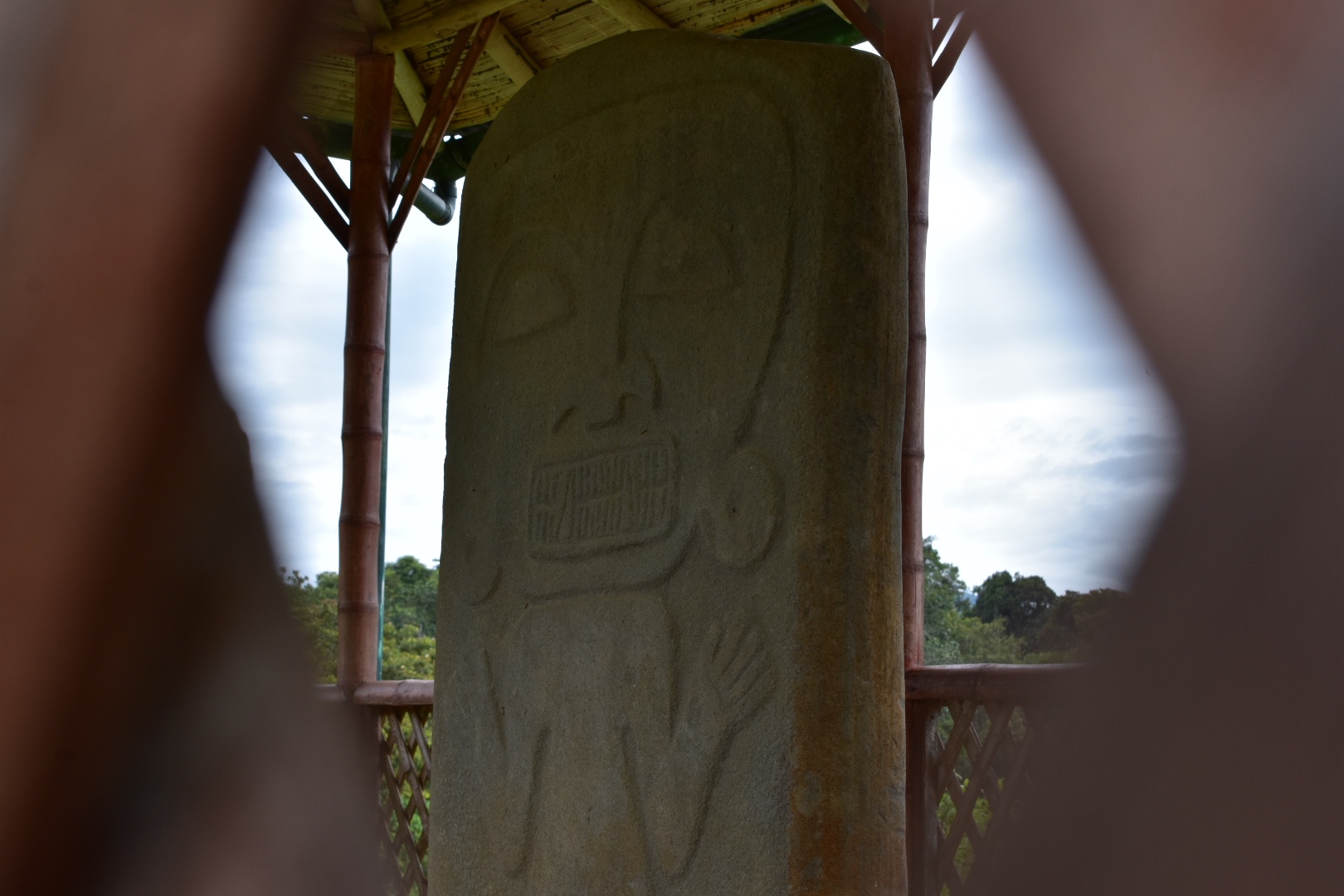 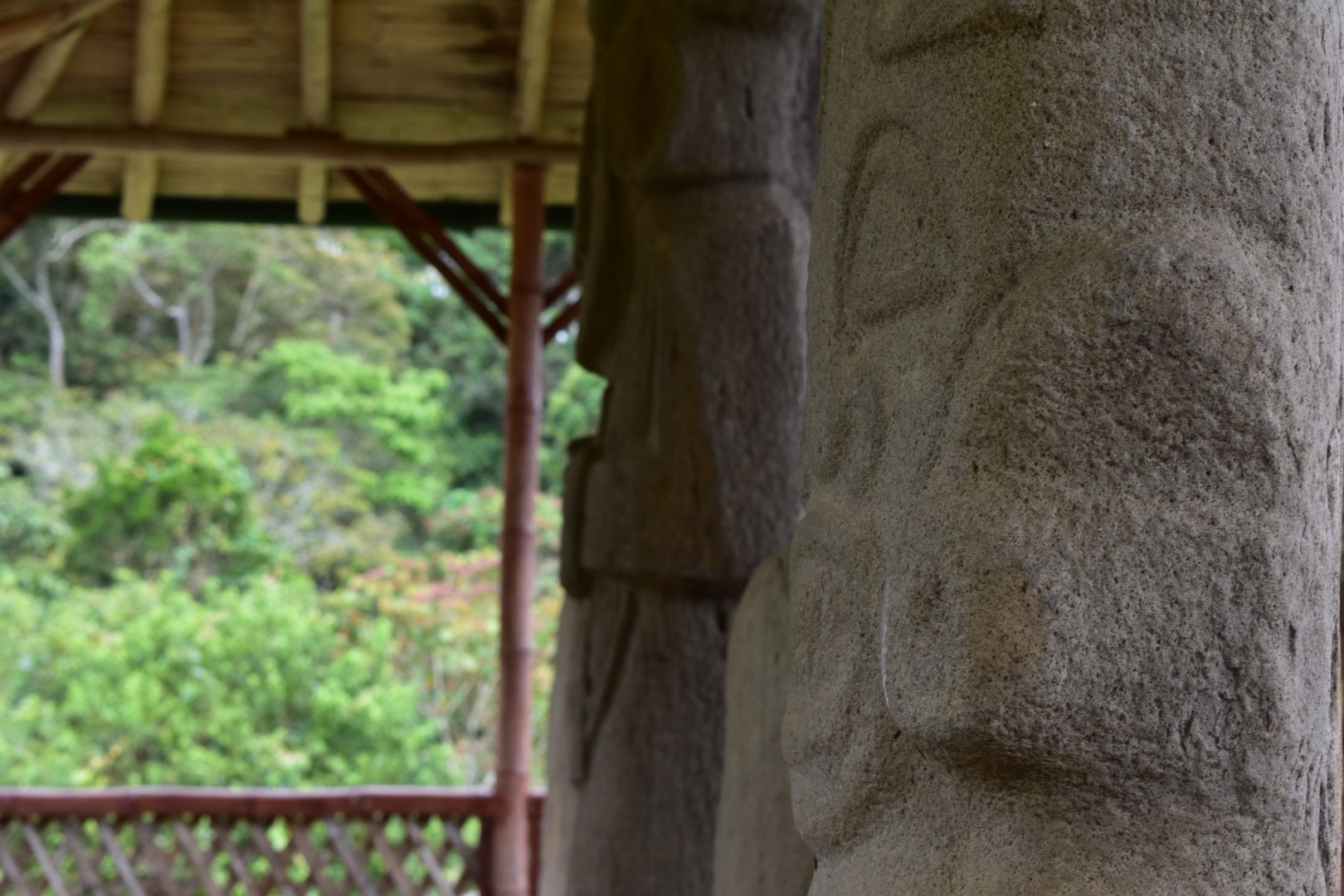 Soon we were back on the horses and this time heading down a step hill. I was still a little nervous but after crossing a stream the two horses that had decided they wanted to be in front started running up hill and mine followed, at a slower pace, and our guide encouraged the others into a trot and soon we were all racing along for a very short distance. I encouraged my horse to move faster as I realised I enjoyed the ride and soon we caught up with the two out in front and we soon arrived at the next stop. It was really evident the horses knew what they were doing even if we didn’t.

We jumped off and waked a little way to get an overview of the valley and see some more faces. Oh and this is my horsey below. 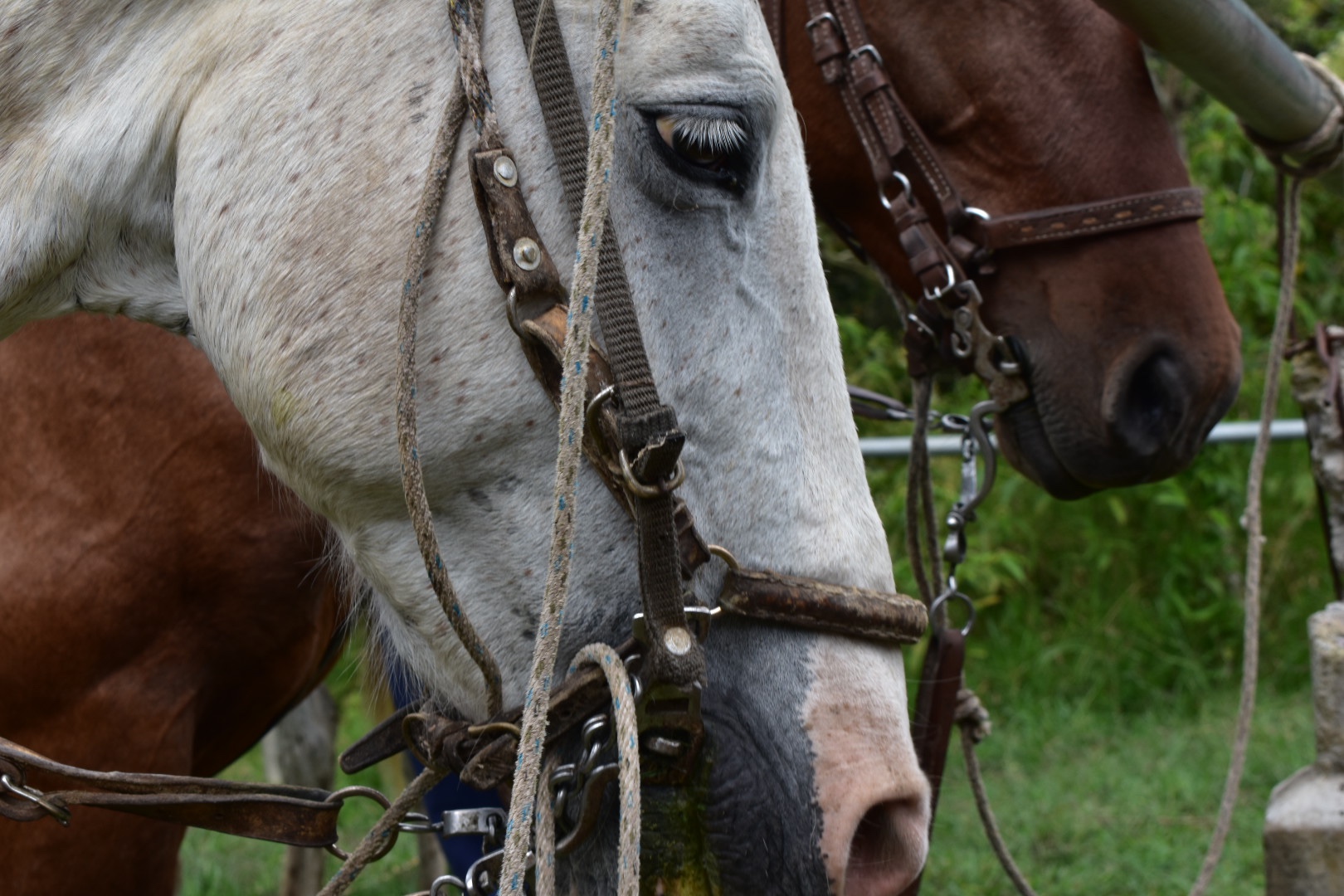 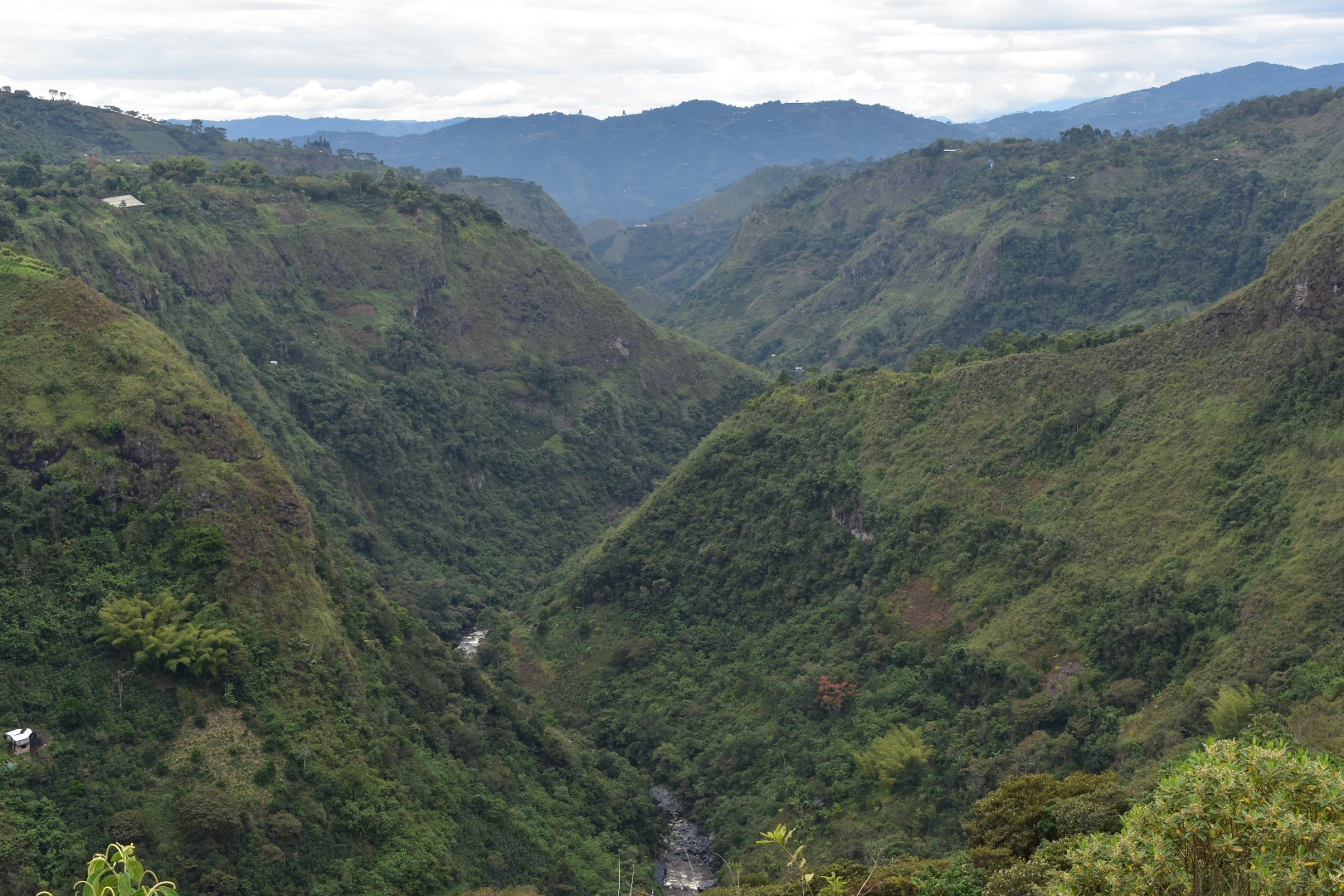 We jumped back on the horses and it was a long way until the third group of faces. We left with the slower group but my group was much more adventurous and we got our horses trotting overtaking and mixing in with the other groups. Again the horses seemed to want to all be in front so there was a little jostling for places and I was a little concerned about how fast along the road they wanted to move. But I manage to stop my steed at the roadworks. We were given the green sign and took a left up a small track at which point our guide whistled to the horses and then they really were off. I don’t know if it was galloping or cantering but its the fastest I’ve ever been on a horse and was really fun. They still wanted to be first but some of the slower horses started to fall behind. It seems that the horses have been taught to run uphill and on the flats and to walk downhill, which worked perfectly until a horse ahead reached the uphill part and started running, at which point the horse I was riding wanted to catch up so ran downhill.

A few members of our group went pretty far ahead, largely due to the horses they were riding and when we caught up with them somehow they had lost a watch. We all stopped to look for it but it wasn’t found. Soon after we reached the final stop. 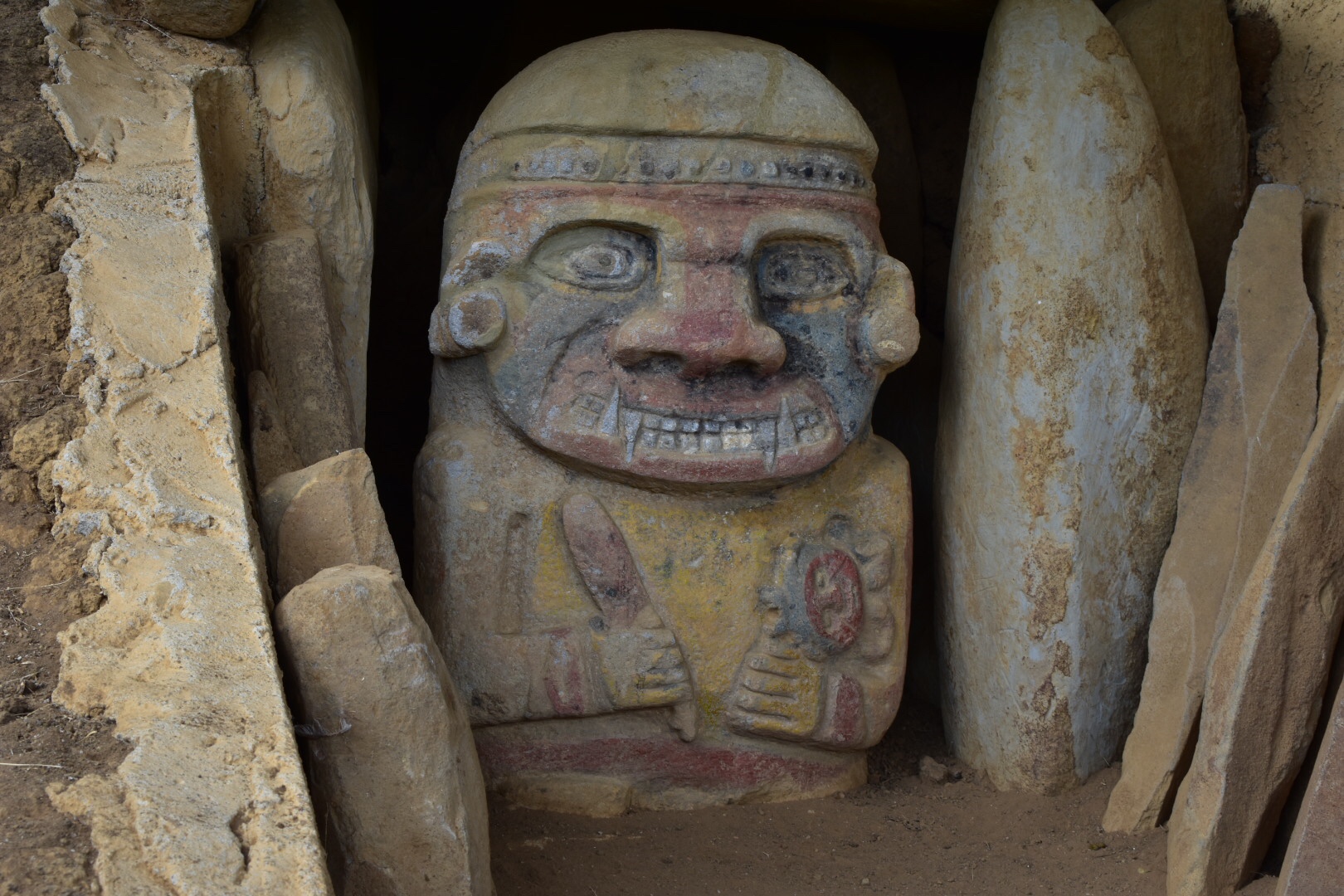 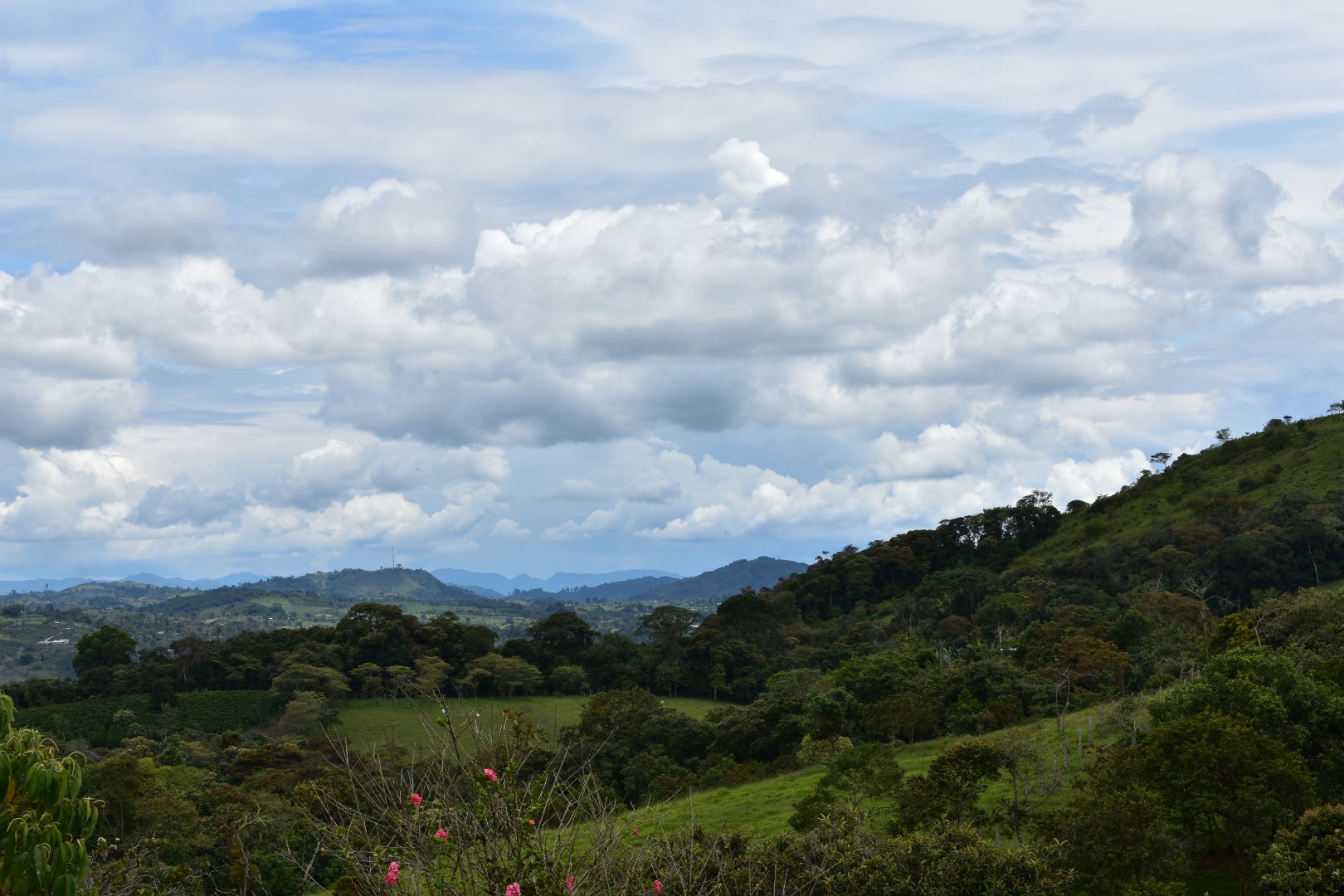 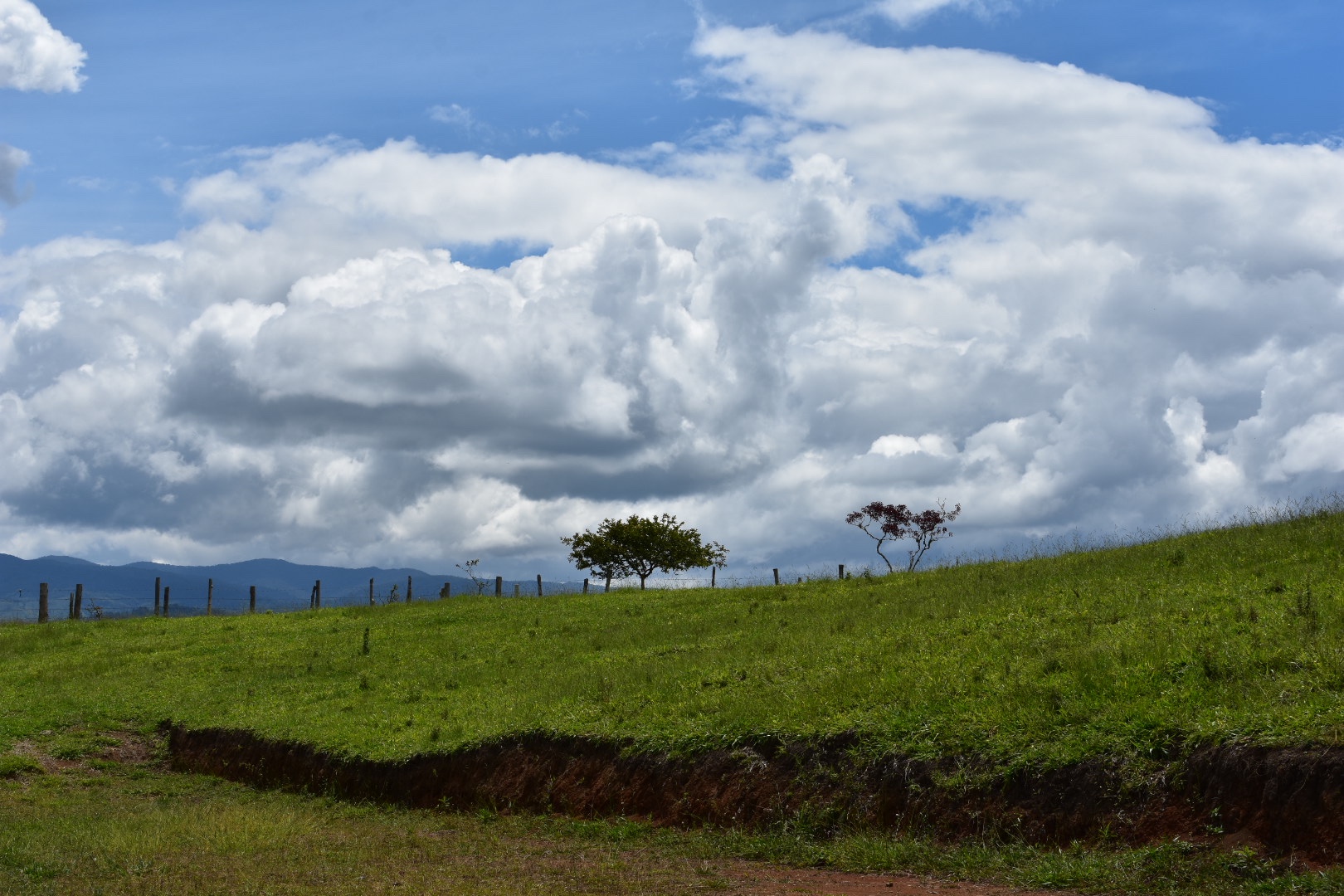 The sky was starting to clear and become sunny and I realised in my stupidity I had forgotten to put on sun cream so I improvised with my jumper. We were told it was a 30 minute trip back town. And to begin with there was a fairly steep down hill. The horses walked slowly, one of which took his rider through all the bushes, but as we approached the bottom they all jostled for places and then they were off. And this repeated for the next 20 minutes. I did my best to bounce in time but I realised my horse was tiring, so I let him go slower although he seemed desperate to win. We ended up on the main road and the horses started walking until the guide came up form nowhere with the stragglers and they all wanted to be first again. Although it was probably the whistled signals they were given. Interestingly cars and lorry’s didn’t really slow down for the horses here and they don’t seem to bat an eyelid at the traffic. Its the same with all the animals here. Dogs can cross the roads by themselves, cats do what they want as always but animals are much less scared of loud sounds and humanity which I think is a good thing. I mean South America is a dogs paradise as they can just do anything they want.

So here are the riding pics that I didn’t shoot. 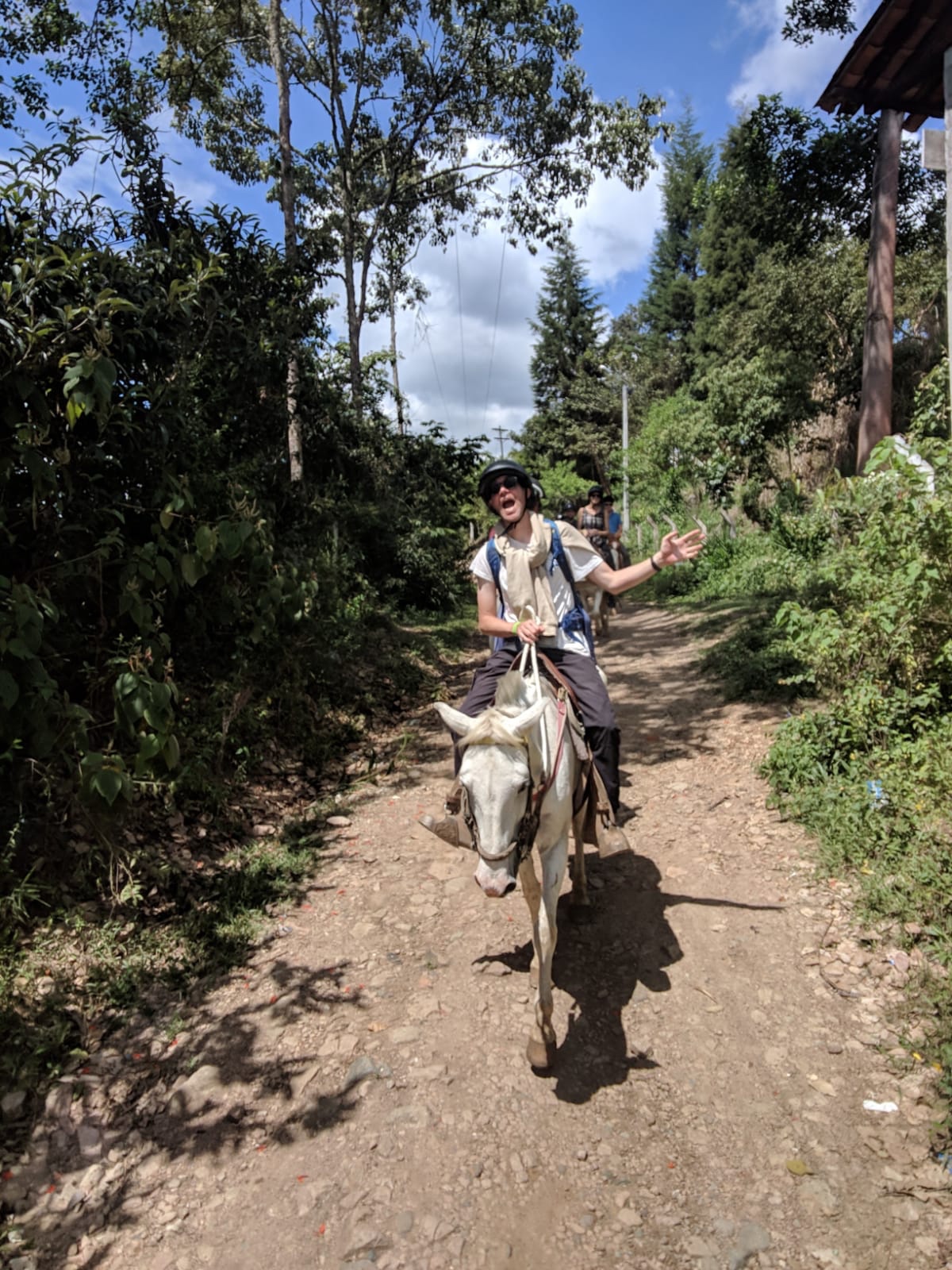 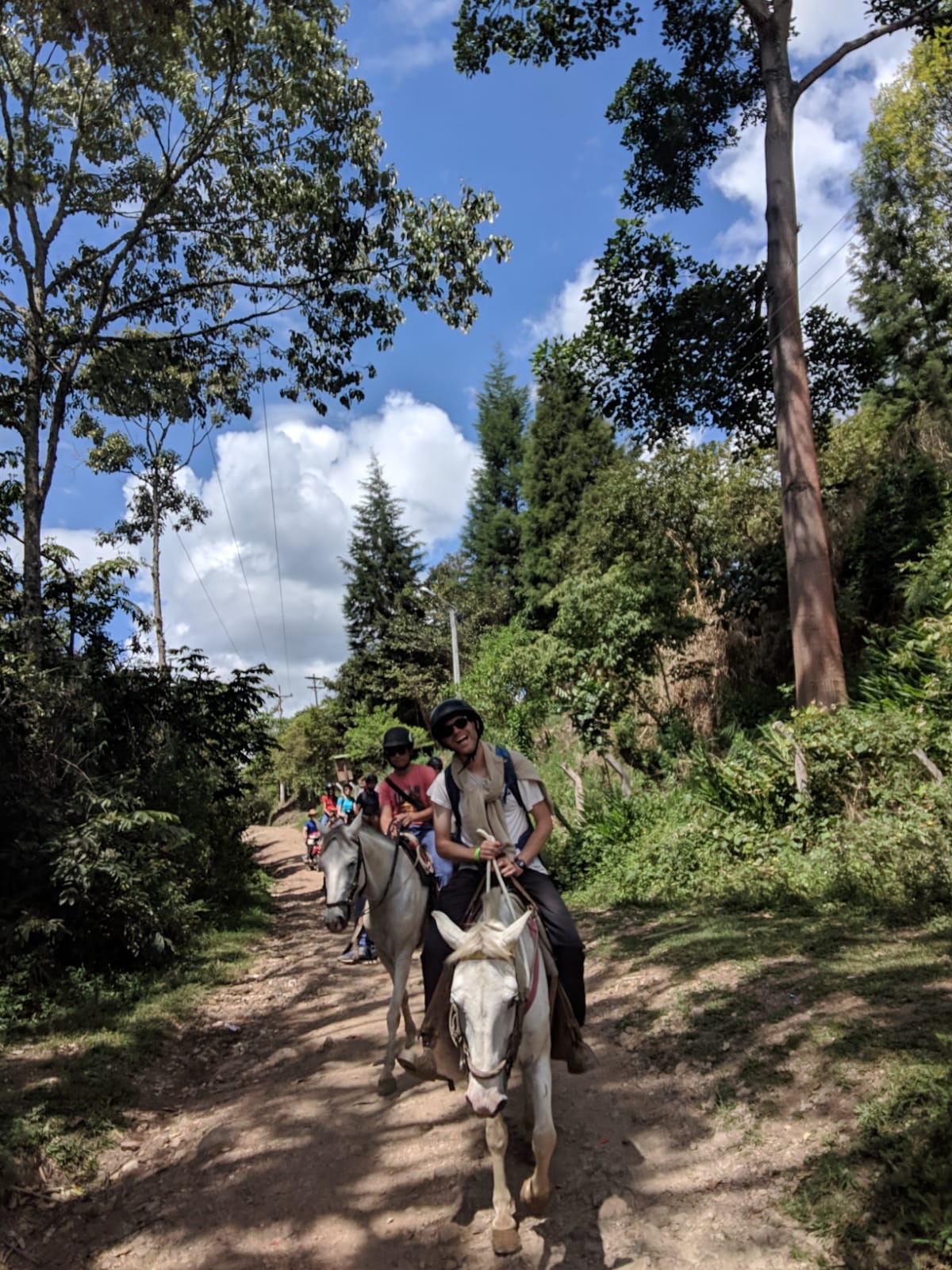 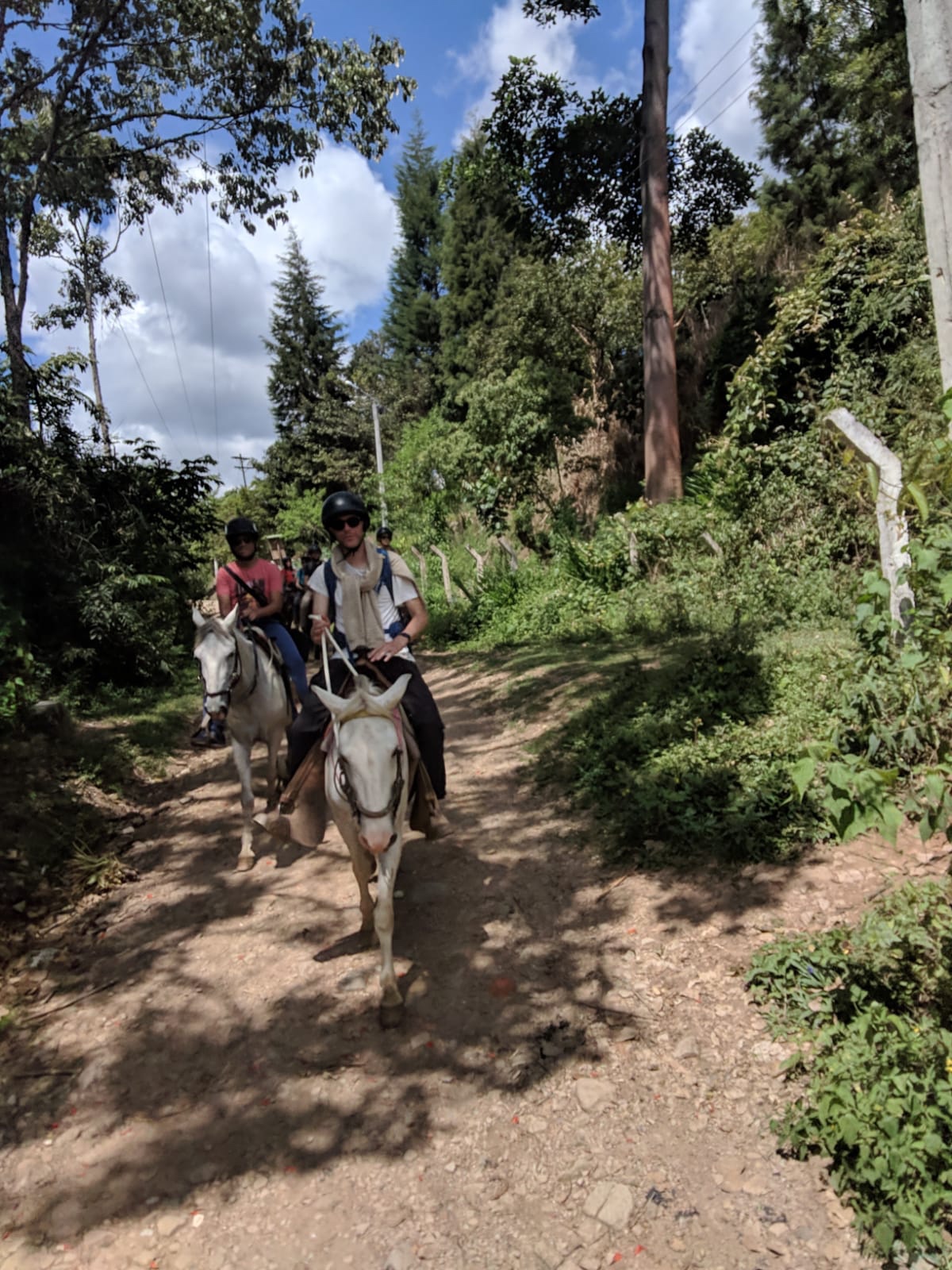 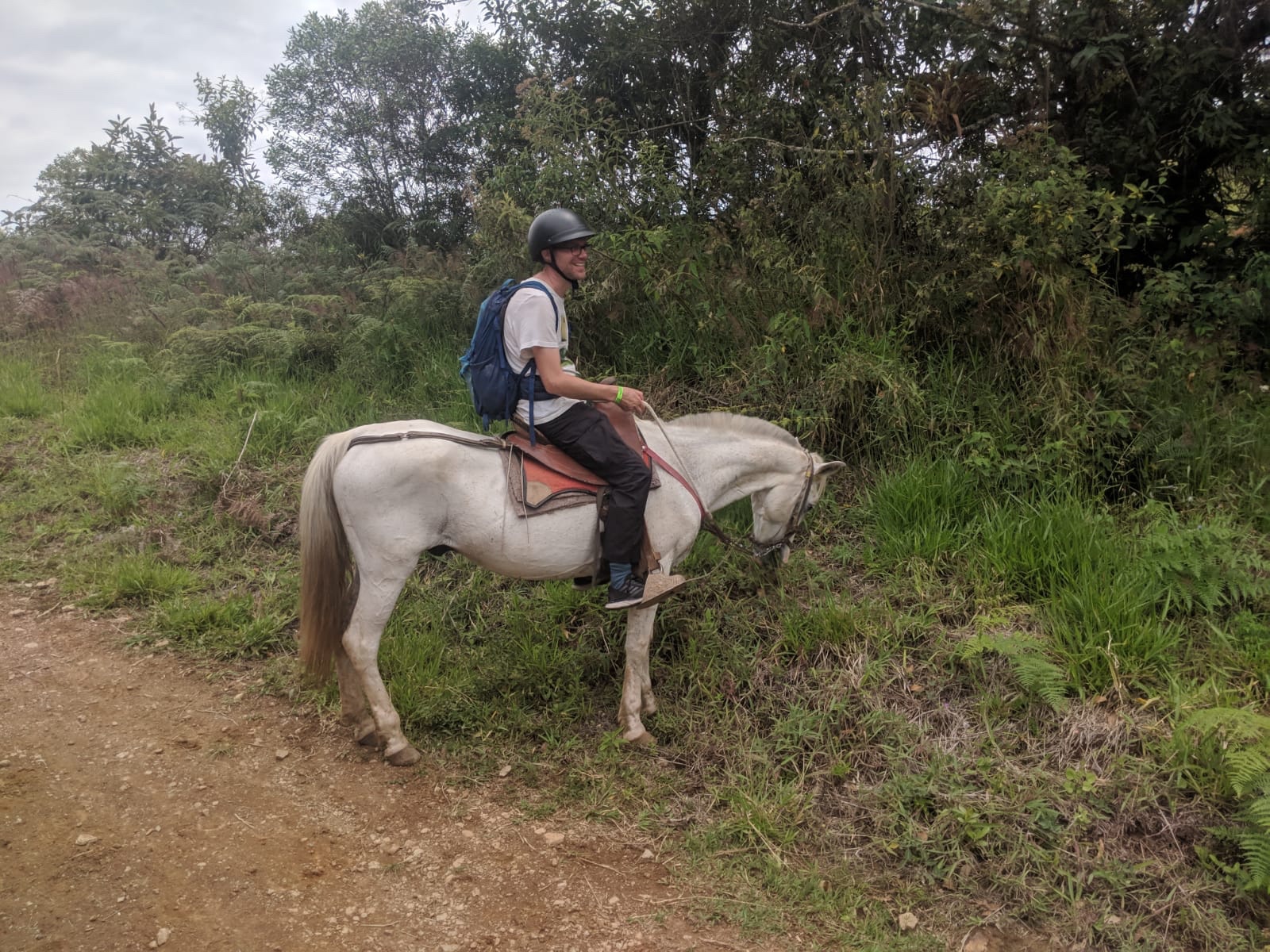 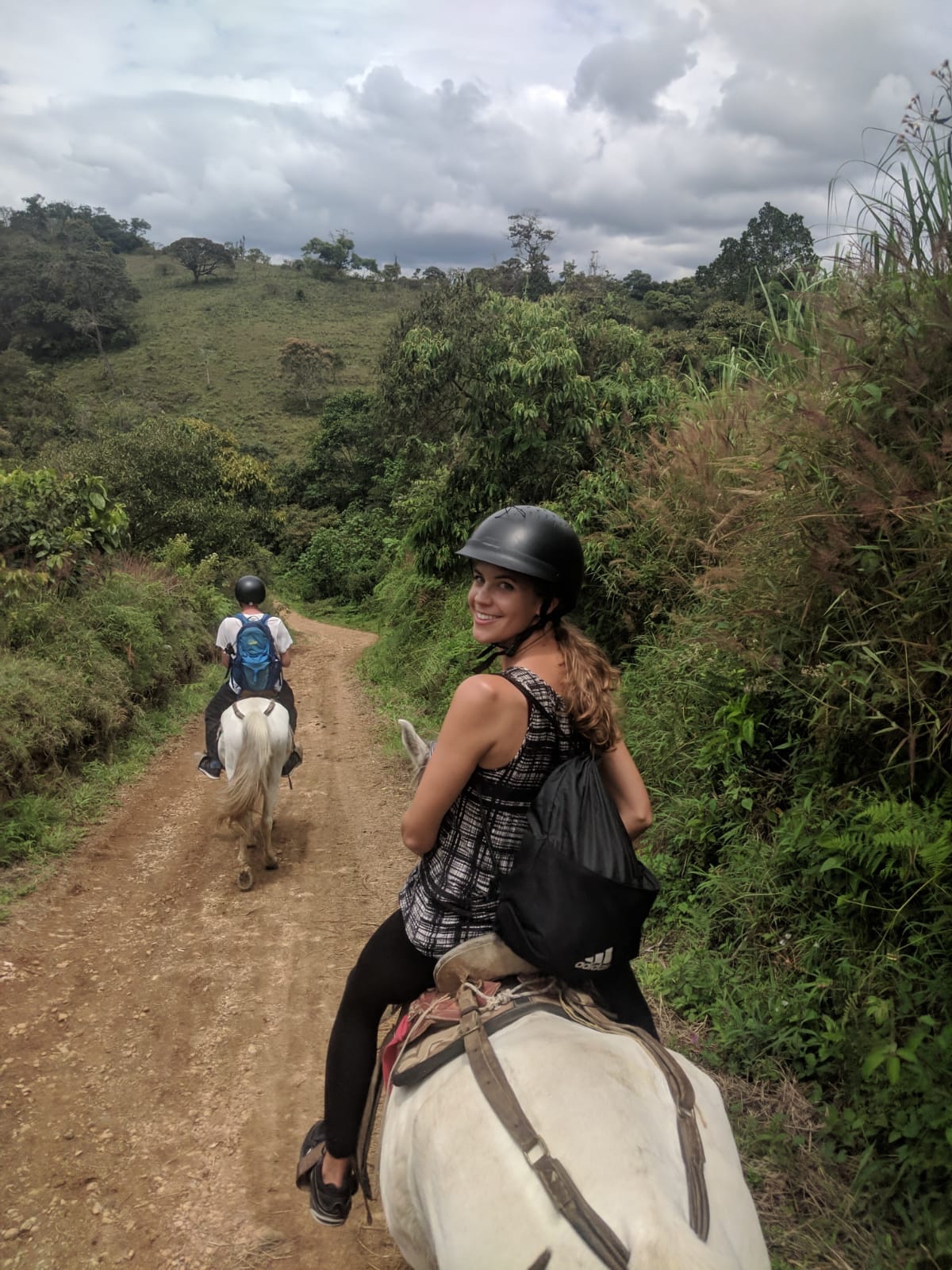 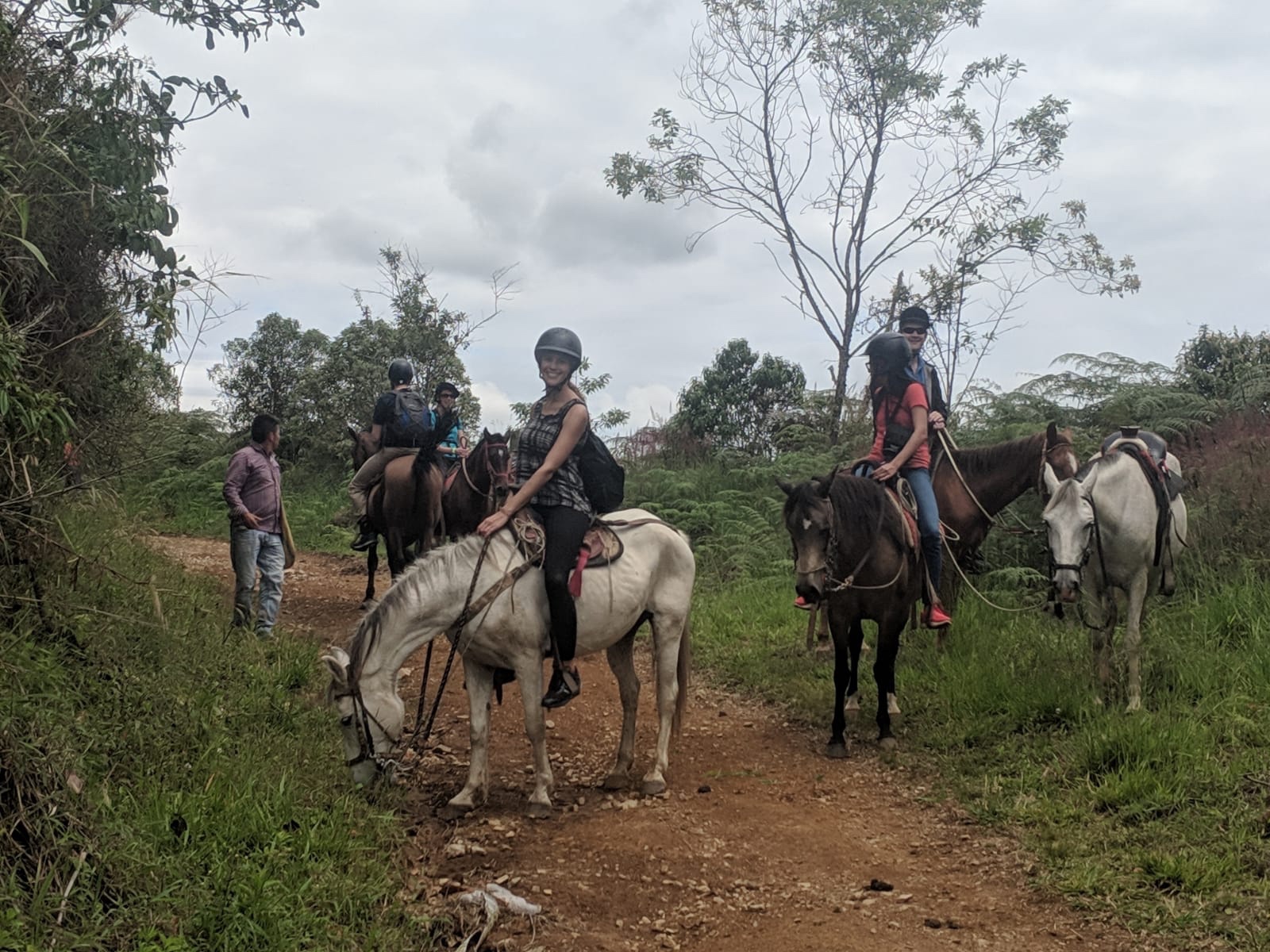 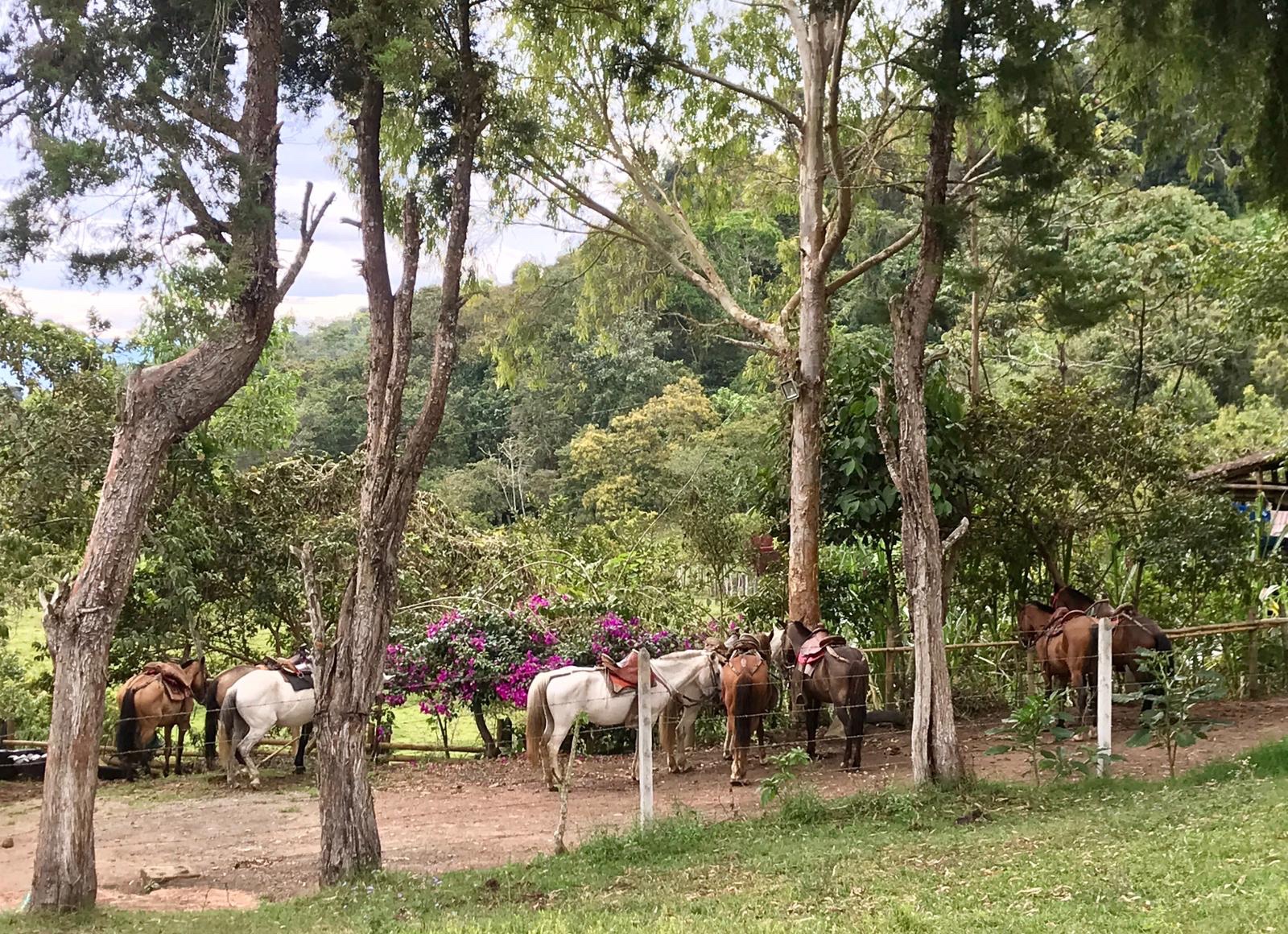 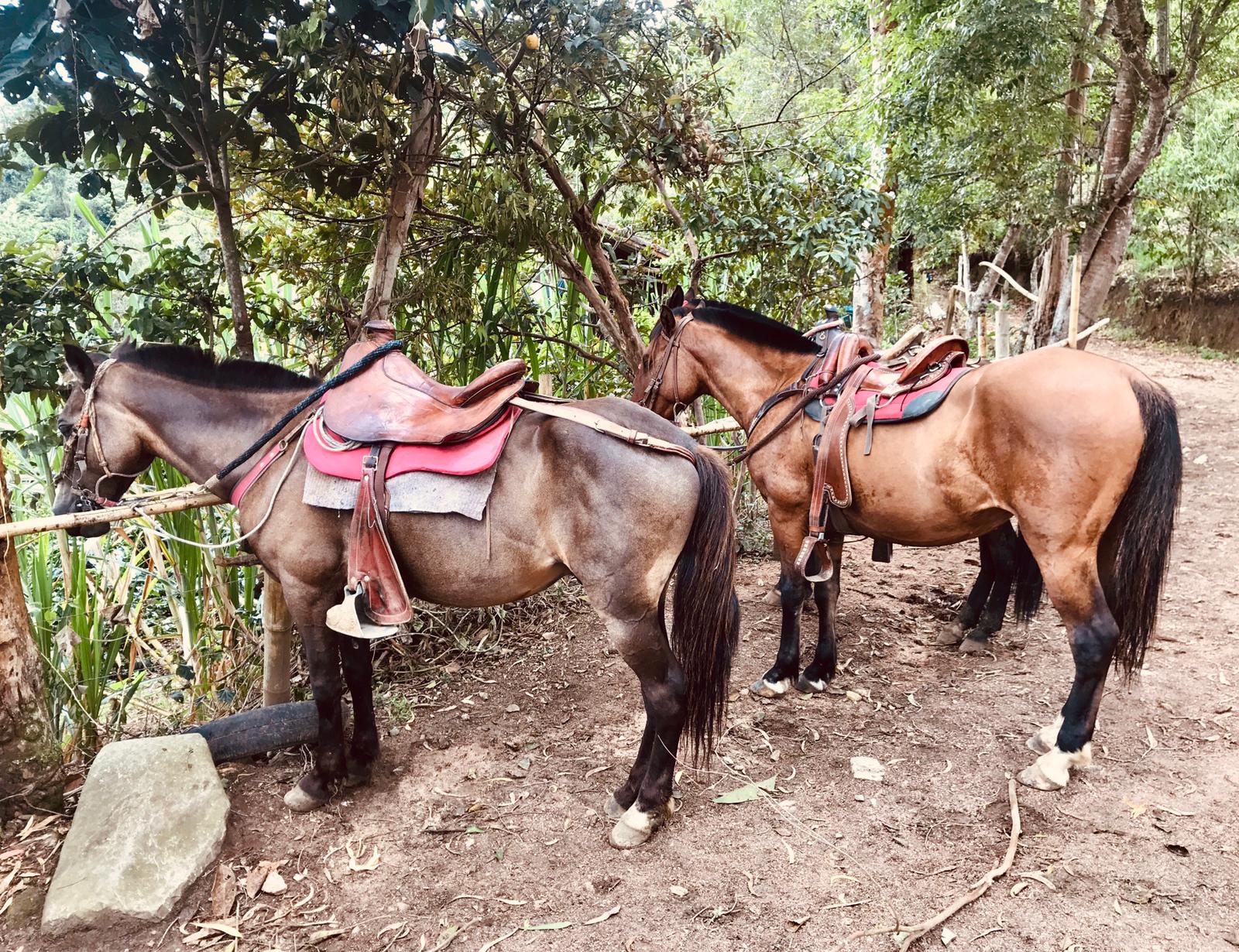 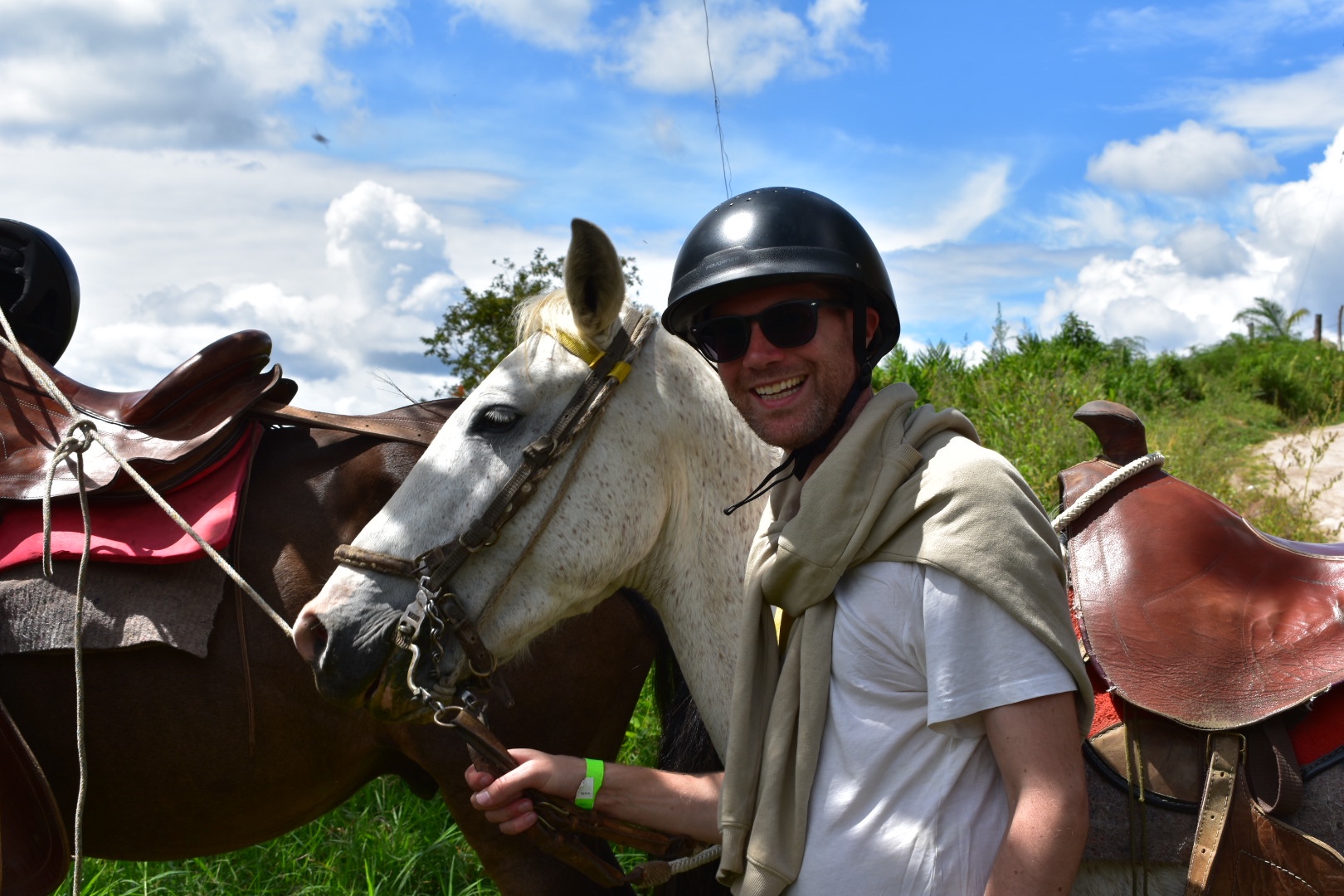 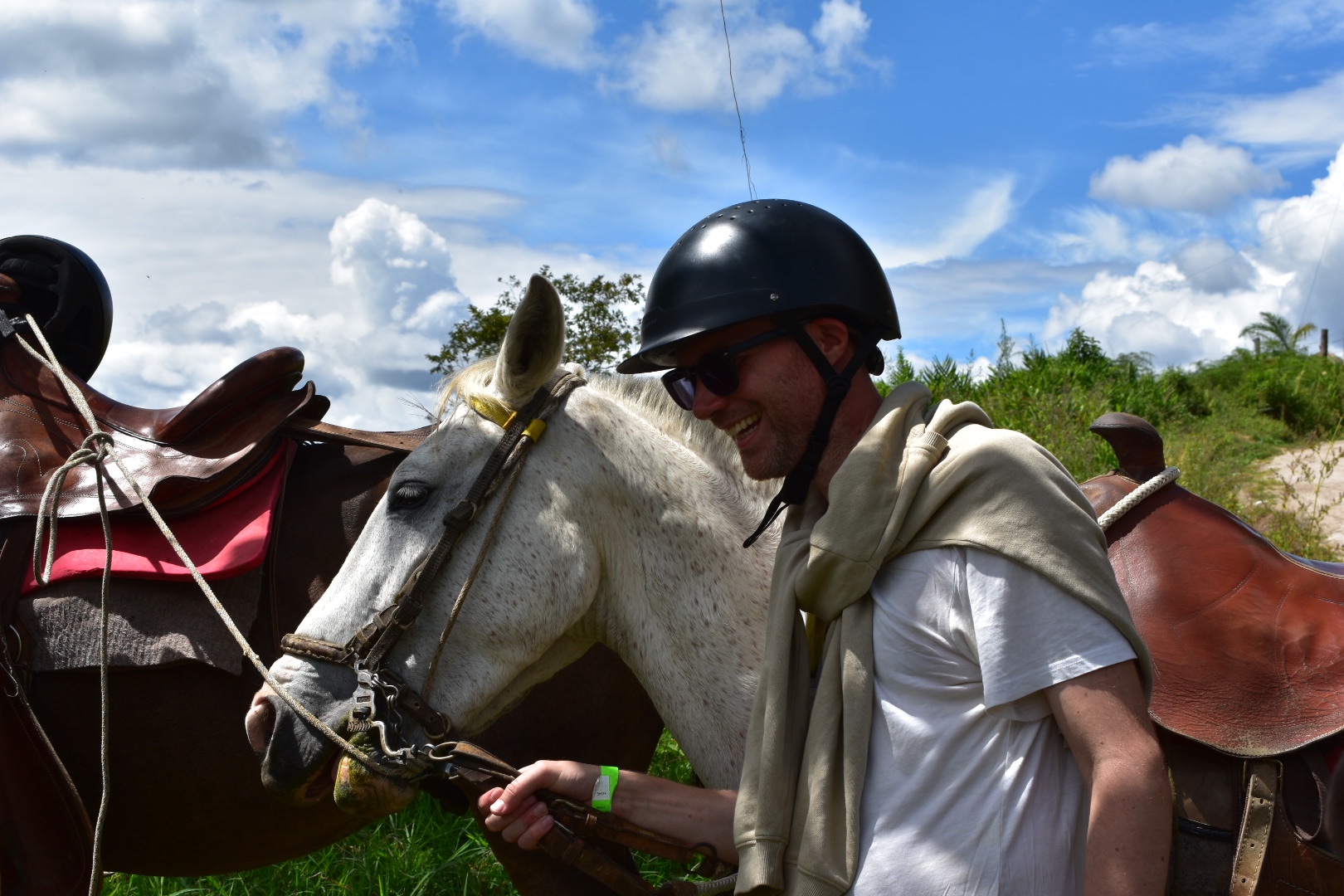 We all went back tot he town and had a menu del dia before retiring to the hostel for the afternoon. 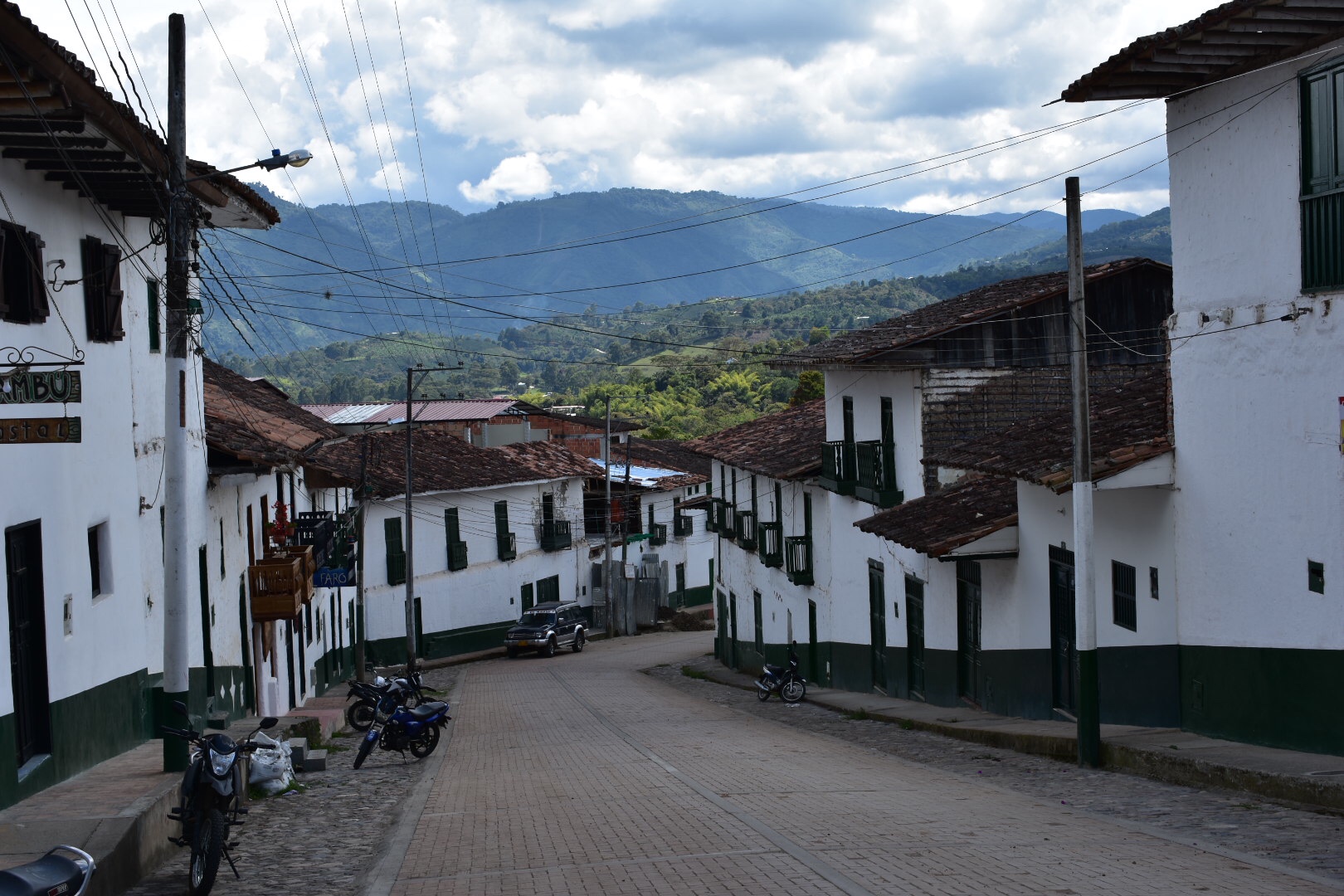 That night we went to get supplies for the next day and then went to a bar to meet up with Nathalia. She arrived with a Mexican friend and I was glad that most of my new friends could speak better Spanish than I could. We had a 6am wake-up call for the bus the next day so most people didn’t stay very long but I wasnt going to turn in early. We went to a second bar, well collection of bars which had a live band outside. Its kinda hot here all the time so no one sits inside and this was interesting as there were several small bars together selling the same drinks for the same prices and you chose which one you went to. There didn’t seem to be anyone who cared which bathroom you used or where you danced. People were dancing on the street, around the tables and anywhere. Nathalia tried to show me how to dance but it did’t work. We soon moved on to another bar where there was more dancing and chatting. But soon I realised it had gone 1am and I needed to get some sleep ahead of the morning, it might have been later, which was a shame as I was having fun. I said goodbye and headed to the hostel ready for the next trip. 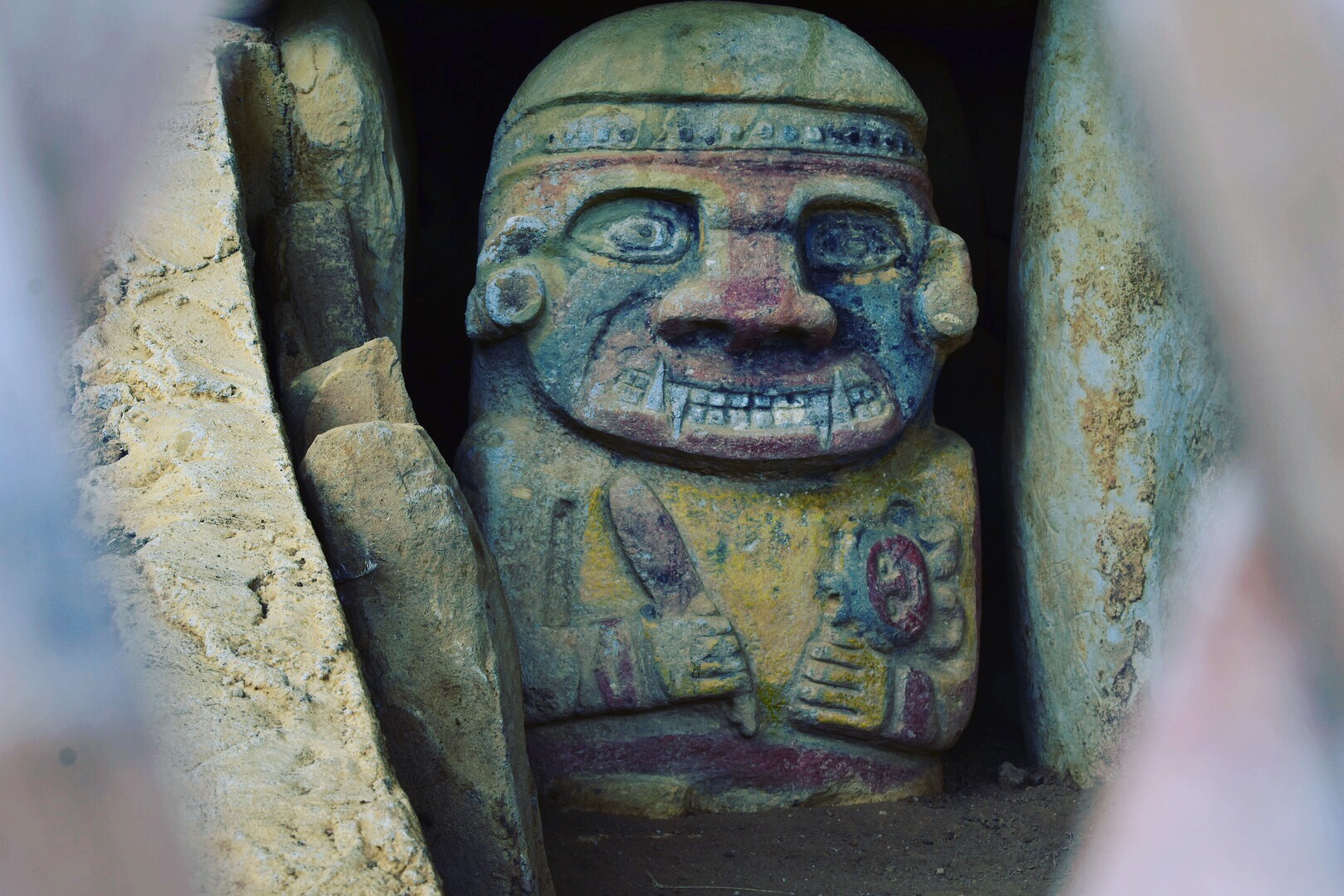 One thought on “San Agustín”