My next stop was Puerto Madryn in Patagonia travelling over 1500 miles on two flights. I was particularly excited as Patagonia is one of the main reasons that I came to South America. I awoke early, took a taxi to Salta airport, withdrew cash and in the process left my card in the machine. Thanks to everyone who responded, especially Gary. The first flight was fine and landed in Cordoba. The flights went without issue, except at the second airport there were two gates boarding at the same time and half the passengers nearly ended up on the wrong plane.

Patagonia is renowned for strong winds and I got my first taste of them during landing. You could feel the plane being blown around, which I thought was fun, before touching down perfectly. I landed at Trelew which has more flights then Puerto Madryn’s transport is 300 pesos and takes around an hour.

There are two main destinations, Punta Tombo a penguin colony with 1 million penguins and Peninsula Valdes where you can see Sea Lions, Penguins and Orcas. Both trips will set you back 1450 pesos plus the entrance fees to the parks around 400 pesos each if you take a tour.

I met Sam and Dena, both Swiss, at check in to La Torsca Hostel, which I can recommend, and we decided to hire a car instead to see the local wildlife. It seemed more fun and meant we could go at our own pace-plus it was cheaper. 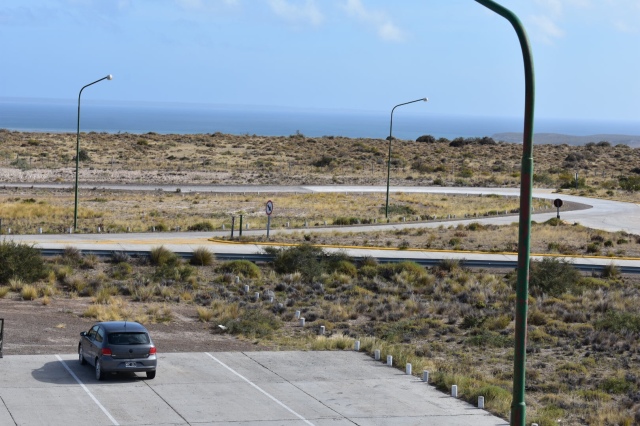 That night I explored a little of the Puerto Madryn. It’s fairly touristy along the sandy beach, which looks straight out on to the Atlantic-yes the water is freezing! It seems really safe and reminds me of a small US city. The bars along the front are a little pricey. I’d recommend going to La Milonga, on 9 de Julio for pizza. It’s filled with locals and was one of the best pizzas I’ve ever had! So much mozzarella. The Italian influence is really good thing. 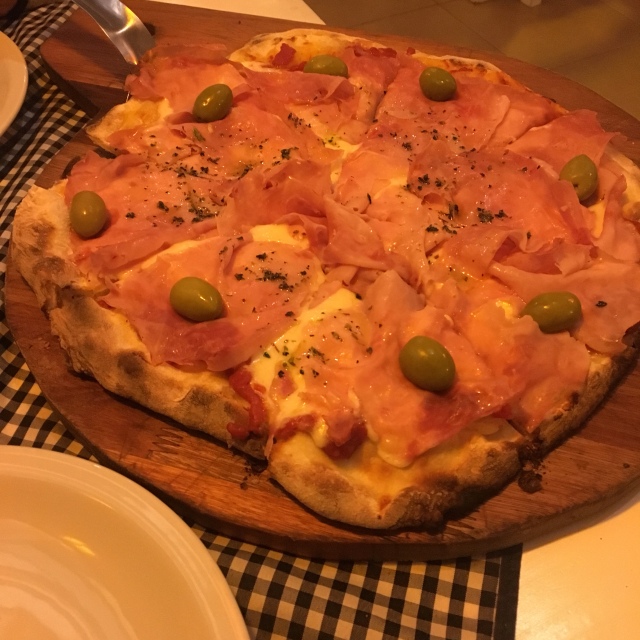 The next day we set out to hire a car. The first place had none available and the other two were not open despite their opening times being present. I started to panic thinking I should have taken a tour but we opted for a coffee and I decided to take a leaf out of the Latin style of life and relax. Before I knew it, we had a car and were on our way to see penguins at Punto Tombo. Be warned if you do drive, or take a tour, it’s a long way! The maps made it look really close, but this is Argentina and I’m learning that nothing is close. It was 170km each way. The road was pretty straight through the steppes with sting winds trying to blow the car all across the road. In this part of Patagonia the steppes are largely flat and covered in bushes. There is no shade so do not attempt to walk. The last 17km was a gravel road which felt like it took forever but after three hours we arrived and was time to see the penguins. We forgot to bring any food and whist there is a cafe it’s not cheap, we did not make the same mistake the next day. 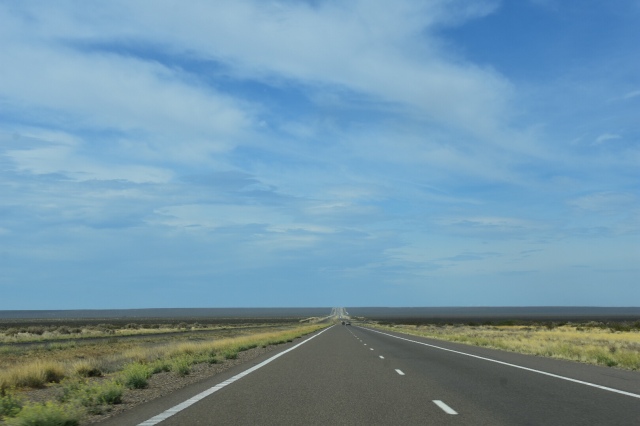 I feel that this is a really good nature reserve. The entrance fee goes to support the wildlife and the park is not too intrusive. Tourists are allowed to follow a path which winds its way through the colony to the beach-although you do get really close to the penguins and they cross the path it doesn’t feel intrusive. Truth be told the penguins could not care less if we were there or not. I’m not sure we even registered as they mostly sat there sleeping or pruning their feathers without even looking at us. I’ll let the pics go the rest of the talking. 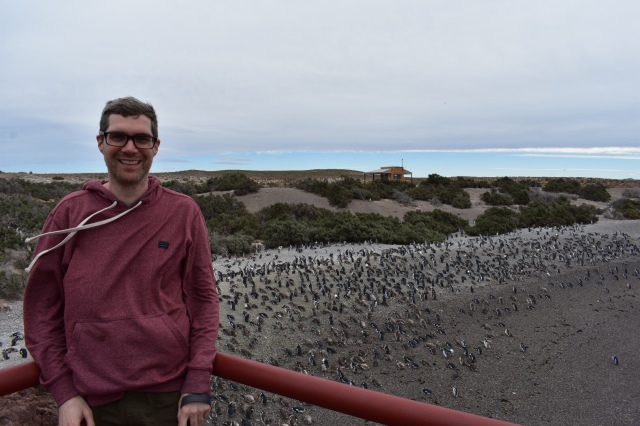 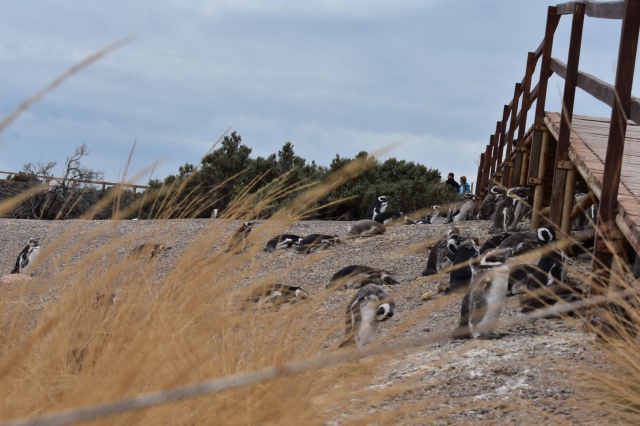 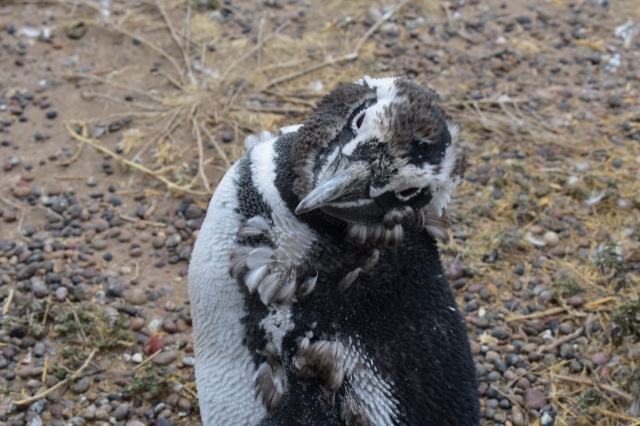 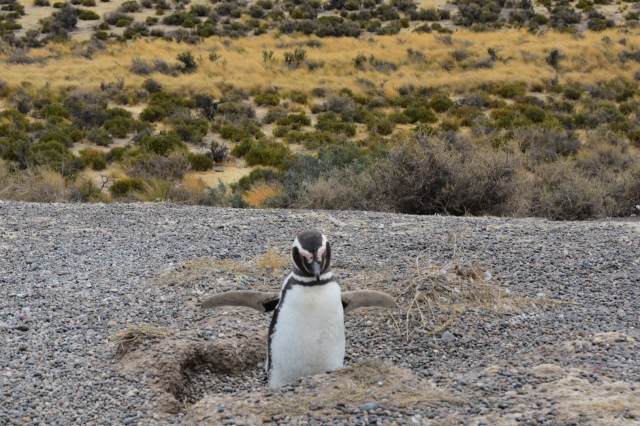 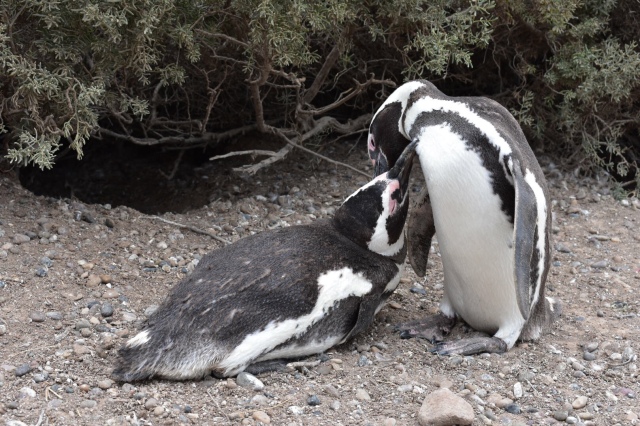 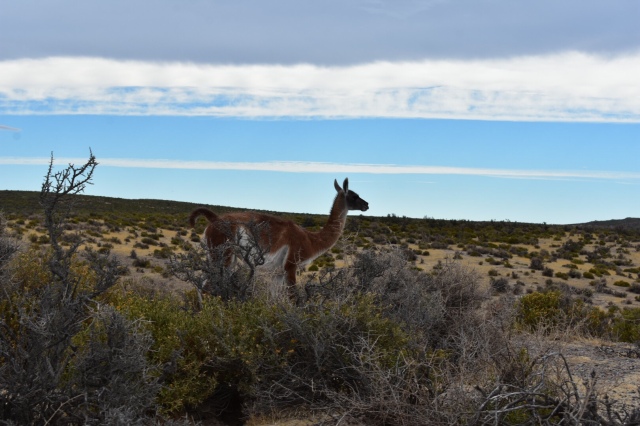 The next day it was time for Peninsula Valdes. This looked much closer on the map and after around and hour we arrived at the visitors centre and the drive down to the beautiful village Puerto Pirámides, where Dena was spending a few days-I wish I was too. 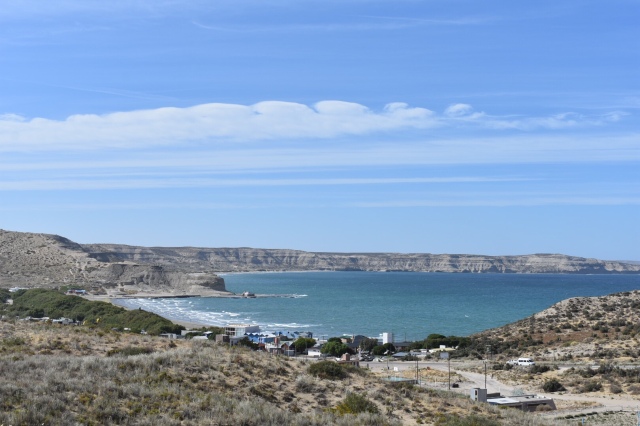 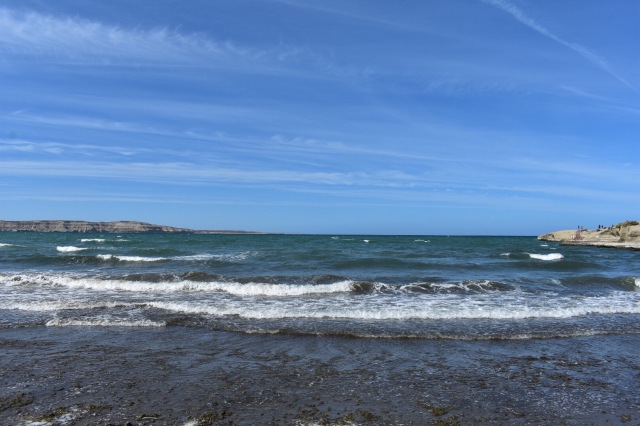 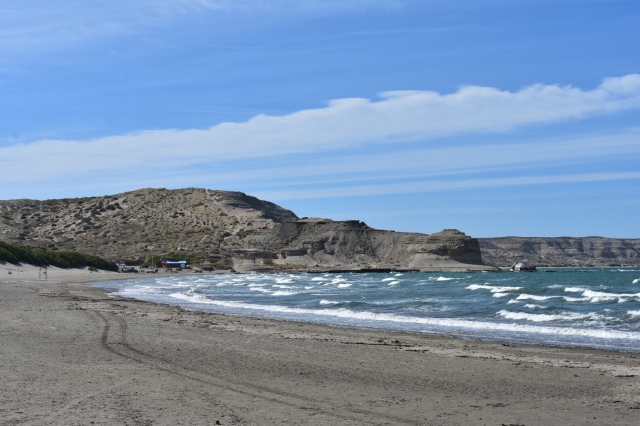 After some photos and a coffee we stated the journey to Punta Norte, all by gravel road. After about 5km there were two guys walking down the road hitchhiking. They would be headed nowhere fast as it was around 70km still to the first stop, so we picked them up and headed off together. It turned out the two lads 17/18 were from Buenos Aires and this was their first trip away alone. One of the guys spoke really good English and they were both really polite and happy to come along. It’s little things like this that you don’t get from a tour and we had a nice cultural exchange.

A Peludo joined us for lunch. 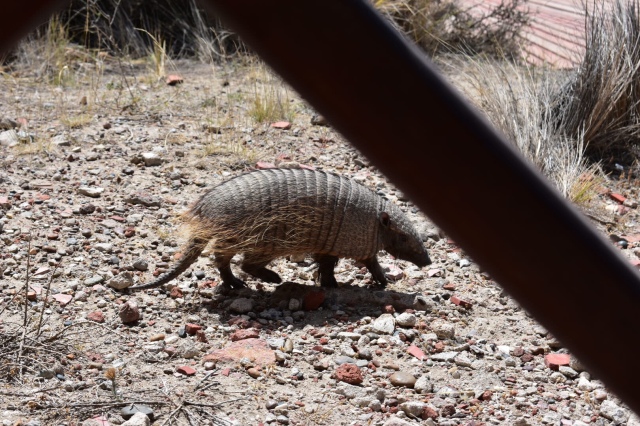 We waited at Punta Norte but the Orcas must have not been paying attention to the time as they did not come. Still there was plenty of other wildlife to see. 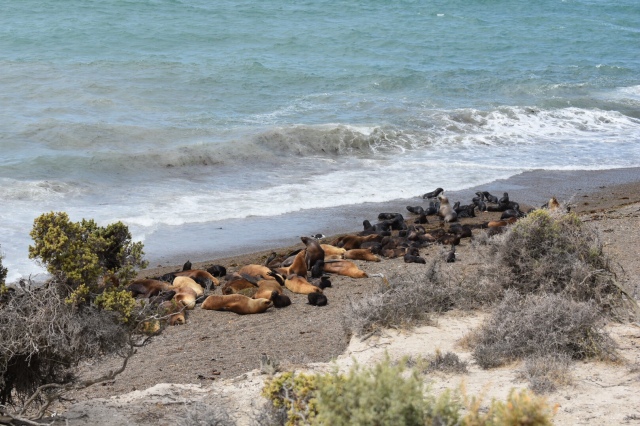 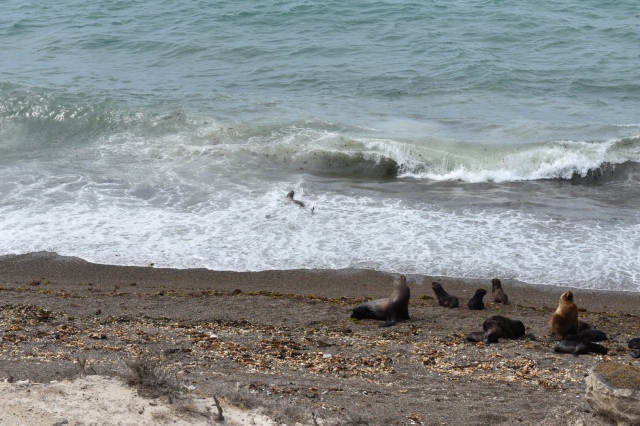 We were told that if we drove another 40km down the coast then we would see the Orcas. So off we headed and stopped to see more penguins on the way-which was nice as that’s what our passengers really wanted to see. 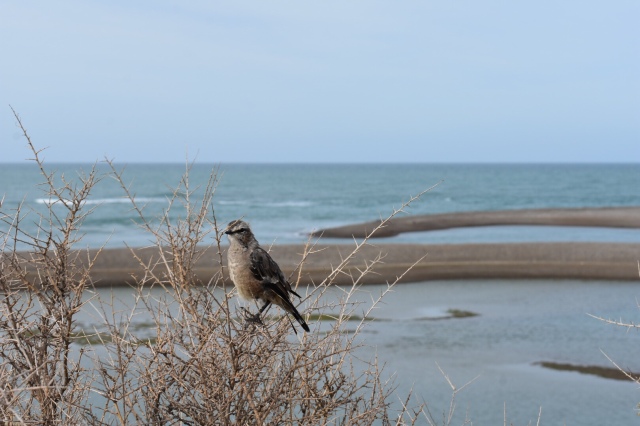 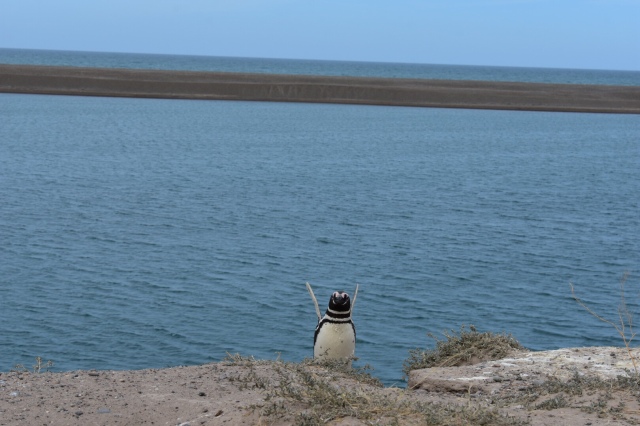 Still no Orcas but that is nature’s way and it was time to head back. We dropped off the hitchhikers, Dena at her hostel and Sam and I headed back to the city to drop off the car. After nearly 800km of Driving it had been a fun couple of days. 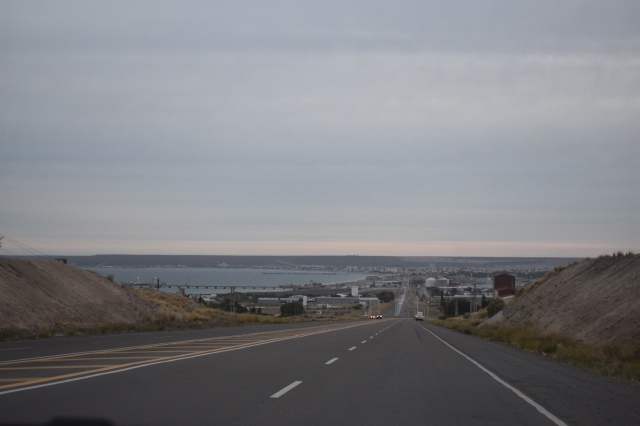 Tomorrow I was getting the bus to Bariloche but before then I decided to squeeze in a trip to Gaiman and get some Welsh tea.